The speed of light has brought carbon a long way

Carbon fibre has come a long way in the 30 years since it was first used for a car’s chassis, but cost and production time have restricted more widesepread production. However, both of those issues are being overcome.

When John Barnard and Ron Dennis of Project 4 got involved with the McLaren motor racing company, they set in train a technological leap; 1981’s McLaren MP4/1 was revolutionary. It was the first racing car to use a chassis constructed primarily of carbon fibre. It was so light that weight had to be added to ensure it conformed to the rules. The chassis was stiffer than conventional aluminium tubs, too, and even with the by-then outclassed Cosworth DFV engine, it won race.

And its impact resistance was unbelievable. GP driver John Watson survived a severe accident during the Italian Grand Prix at Monza in 1981, convincing any remaining doubters that this material was the way forward. Carbon fibre composite became the standard material for Grand Prix cars, and remains so today. McLaren debuted the first roadgoing car with a carbon fibre reinforced polymer (CFRP) chassis in 1992—the Gordon Murraydesigned McLaren F1. It, too, proved the material’s safety when actor/comedian Rowan Atkinson crashed his on a country road in Cambridgeshire, England, in August 2011. He was discharged from hospital later the same day with nothing worse than bruising and hurt pride. The latest iteration of the roadgoing concept is the McLaren MP4/12C, launched last year. Its engine produces nearly 600bhp with kerb weight less than 1,400kg. The central carbon fibre composite monocell is attached to an extruded aluminium front end and aluminium rear spaceframe. 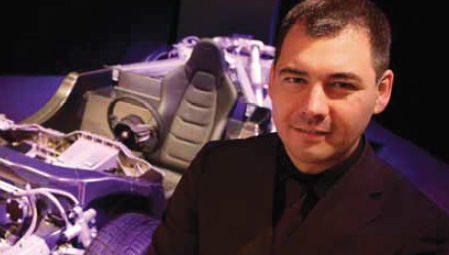 Slashing cycle times
There were only 106 F1s built during its entire production cycle, from 1992-98 including track cars and special editions. The MP4-12C can be produced at the rate of eight or nine vehicles each day. In just one month, McLaren could make more MP4-12Cs in its production centre than the total number of F1s produced during its entire life. A huge contribution to this difference is the improvement in production processes, of carbon fibre especially.

“It took around 3,000 hours to produce the F1 carbon fibre monocoque,” says Claudio Santoni, production group manager for body structures with McLaren Automotive. “Cycle time for the 12C’s monocell is around four hours.” Perhaps even more impressive is that cycle time for the MP4-12C’s monocell has been reduced by nearly 90% compared with the much more recent McLaren Mercedes SLR, in production from 2002-2009 and itself a 90% advance on the F1; its core required only 300 hours. “We are now using fully-automated resin transfer moulding, as opposed to prepreg (pre-impregnated carbon fibre) and an autoclave,” Santoni says. The chemistry of new resin materials is different as well but how different is commercially confidential and suppliers are reluctant to divulge their secrets. “Automation and the design concepts make it easier to work with. The materials are designed to work within the bounds of the manufacturing process,” adds Santoni. The monocell is supplied by CarboTech, of Austria.

Automatic for the people
Advanced Composites Group (ACG), now known as Umeco, has been a supplier of structural and tooling prepregs, 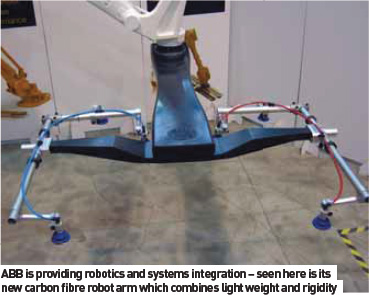 particularly in motor racing, for many years. It continues to be involved in supplying turnkey carbon fibre prepreg solutions and support to automotive and other product manufacturers.

“Producing carbon fibre components used to be labourintensive,” says Steve Cope, Umeco business development manager. “One way of dealing with that has been to send production to Eastern Europe, to take advantage of lower costs. But production is now automated; robots perform lamination. The goal is to make a part in two hours.” While an autoclave remains as an option for curing the laminated component, ovens and presses are becoming more widely used. “The best way to meet volume needs is to use a press. It can produce higher pressures than an autoclave and it is more consistent,” says Cope.

While carbon fibre part costs remain high, they are coming down and the material is appearing in highervolume production runs. There are indications that BMW’s I3 and I8 projects are using similar principles to McLaren. A correspondent who prefers not to be identified told AMS S that one thing that has been holding back the more widespread adoption of carbon fibre is that designers in the major OEMs have continued to design in “black metal”—they may specify carbon fibre but the way they are designing makes clear they are thinking of the properties of metal, rather than carbon fibre. Which is a bit strange, given that thermoplastics have been around for some time and they, too, can be moulded into complex shapes without compromising their strength and resilience.

On the other hand, tooling for major material changes is expensive; things may change in the next 10 years as OEMs gear up for volume production of e-vehicles, which are likely to make more use of non-metal materials in their chassis and bodywork. There are indications that this is in process. Santoni says there is a lot of interest in what McLaren is doing; it shows that the established technical constraints are being overcome. 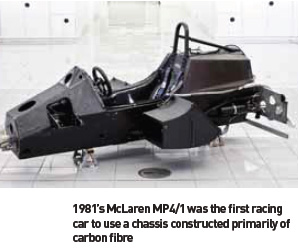 but it is moving to higher volumes,” Cope observes. Umeco is involved in the multi-company Armature Project, whose objectives are cost reduction, raising production rates to in excess of 10,000 parts per cell, and enhanced part repeatability. The enabling technologies are robotic pick, place and form; the use of “highly comformable” prepreg materials; novel techniques for preform construction; and automated compression moulding techniques.

Umeco has the project lead role, as well as development of prepreg materials and processing technologies. ABB is providing robotics and systems integration; Bentley provides an end-user perspective and the case study component. ESI developed the analytical techniques and Assyst Bullmer developed software and systems solutions for the automated pick and place cell. Bowyer Engineering assisted with the design and development of robotic end effectors. But there is one, pretty obvious question, which nonetheless has to be answered: is an exotic and stillexpensive material like carbon fibre about image-building or is it truly practical? 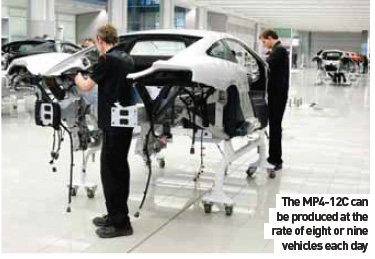 “Carbon fibre helps with passive safety, with vehicle dynamics and, because of its lighter weight, with emissions. BMW has found that reductions in CO2 of 10-15g/km can be achieved for each 100kg of weight saving,” says Santoni. McLaren claims that the MP4-12C’s 3.8-l V8 has “the highest horsepower-to-CO2 ratio of any car with an internal combustion or hybrid engine on the road today”. That translates to 600 galloping horses (PS) and CO2 emissions of 279g/km, so every saved kg is important. The MP4/12C uses a conventional petrol engine and is a two-seater, out-andout sportscar. Does that make it the last, most magnificent example of a dying breed or does it point the way to the future?

“I like to think it is another chapter in the book,” Santoni reflects. “Technology is something that evolves. Thirty years ago, we built the first carbon fibre chassis; we have come a long way and we will continue to develop. The MP4/12C is a showcase of technology we will see in the future.