The pursuit of paint perfection 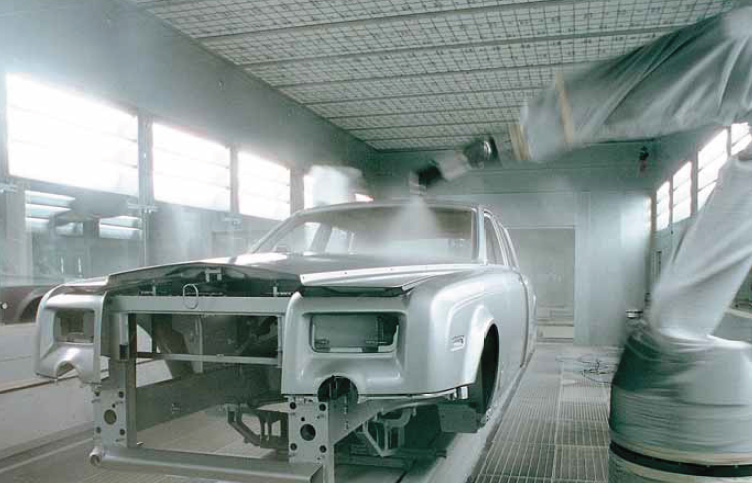 AMS visits Rolls-Royce Motor Cars’ paintshop and talked to Chris Wilkes, Manager of Corporate and Site Services and Paint Planning, about finishing the world’s finest cars and the planned expansion to the facility

While production numbers at the Rolls-Royce Motor Cars (R-RMC) plant in Goodwood in England’s beautiful Sussex countryside are small in global OEM terms, for a super-luxury brand the figures are impressive and the company is planning for sustainable growth. The paintshop (known as the Surface Finish Centre) presently runs two shifts but will move to a three-shift system as demand continues to increase. 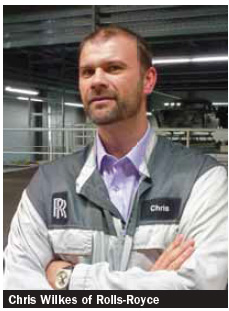 We found Chris Wilkes the perfect person to ask about both the workings of the paintshop and its expansion as he has just moved from Paint Planning to Corporate and Site Services. He says of predicted future production: “We will increase throughput as demand continues. And with the incredible success of the Ghost (5.3 metres long; the Phantom is 5.8 metres) in China and other major export regions, we feel we can plan an extension to the paintshop with confidence and that it will be utilised fully.”

The beautiful surroundings of the facility (it is on the famous Goodwood estate, home of the horse race track, the stately home which hosts the Festival of Speed, and the circuit that stages vintage motor racing at its annual Revival meeting each year) is unique in automotive plant locations but has some challenges as Wilkes says: “One of our planning constraints is that there is to be no main plant activity between 12.00 am and 6.00 am. At present our paintshop shifts run 6.00 am to 2.30 pm; then 3.00 pm until 11.30 pm but the paint unit can run three shifts as required by demand.” In the main plant, Ghost production runs on the two shift schedule and Phantom runs on one shift. An automated storage and retrieval system holds 2.5 to 3 days buffer stock of painted and unpainted bodies; the largest ‘time stock’ in the global BMW production network but as Wilkes says, this is relative: “Three days stock only amounts to 60 cars, they make that many every hour in Dingolfing!”

At present, the paintshop handles Ghosts and Phantoms (one in four cars produced is a Phantom), the finished and e-coated bodies coming from a new body-in-white production hall known as the Werk 2.27 in Unterhollerau, just a few kilometres to the north of the BMW factory in Dingolfing. This new facility was set up as the original line at Dingolfing, while deemed adequate for the Phantom, could not cope with producing the bodies for the Ghost. From 2003 to 2007, the bodies for Phantom model were made at Dingolfing. Today, around 150 workers are employed at Unterhollerau, two thirds of whom work on the Ghost body production line, which went into operation at the end of 2009. Bodies arrive at Goodwood on trucks, by a three-day transport route; four Ghost or three Phantom bodies fit on each shipment.

E-coating and adaptability
Bodies are e-coated and seam sealed in Germany and most of the acoustic panels are stuck in place there. The Ghost is 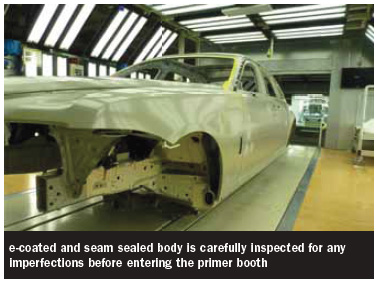 all Zincrometal steel apart from the bonnet panel, and the Phantom model has the largest all-aluminium space frame car chassis ever made, with just the bootlid being made of steel. The bodies are adaptable to left- or right-hand drive as the panels for the steering column and other drive-side specific services are pre-pierced on both sides of the firewall/bulkhead and are simply knocked through when the market destiny of the car is decided. Wilkes is delighted with the quality of the bodies coming from Germany: “All the bodies have been carefully inspected before dispatch to us here, the bodyshop does a wonderful job, to exacting standards of fit and finish."

The window frame areas are masked as the adhesive used to retain the glass would not adhere properly to paint and clearcoat, and would affect the crash rating of the car as the clearcoat would effectively ‘de-laminate’ under extreme stress. Another masking job at this point is the taping of a large sheet inside the car as Wilkes describes: “We cover the inside as none of it will be painted; every part of a Rolls-Royce interior is covered with trim of leather or wood. The plastic sheet keeps overspray off the inside and also becomes a large waste bin during the polishing operation. I used to supply the polishing teams with waste bins but of course they get full and have to be emptied all the time. This way, all the used sanding and polishing media just get thrown into the car and the whole lot can be scooped up at the end and disposed of.” The body is mounted on ‘traverse bars’ in Germany and these stay with the car until the end of the paintshop; they are sent back to Germany where they are cleaned by ultrasonic and pyrolitic methods. 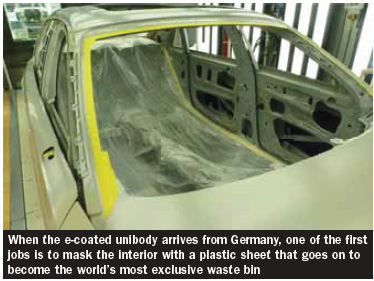 Robot and manual painting
A pre-primer tack rag room sees the whole body meticulously wiped over to remove any dust or grease, then it travels on a ‘T-line’ conveyor running on a track crossways between the row of three painting booths, and the ovens and one cooling booth. After the primer booth, the body reverses and travels backwards into one of two primer ovens, then back to a primer sanding booth and then forwards on to the ‘T-line’ and back to the same booth for the basecoat. Primer and basecoat are pneumatic and clearcoat is electrostatic, all applied by Dürr robots with BASF materials used throughout.

I asked Chris Wilkes about the original construction of the paintshop and the choice of equipment: “We work with a BMW best practice system of machinery purchasing but due to the specialised nature of Rolls-Royce and our lower volumes, we do make some special choices to suit our needs. For example, Dürr has been the preferred robot supplier (for BMW paintshop) but there has been some change to ABB so we would hope to be as flexible in our choices in the future as well.

“Burkamp built the structure originally, with Dürr subcontracting; this changed as Moll took over the Burkamp business and this is all now under the Sturm GRUPPE company, who will be the main contractor for the extension to the paintshop. 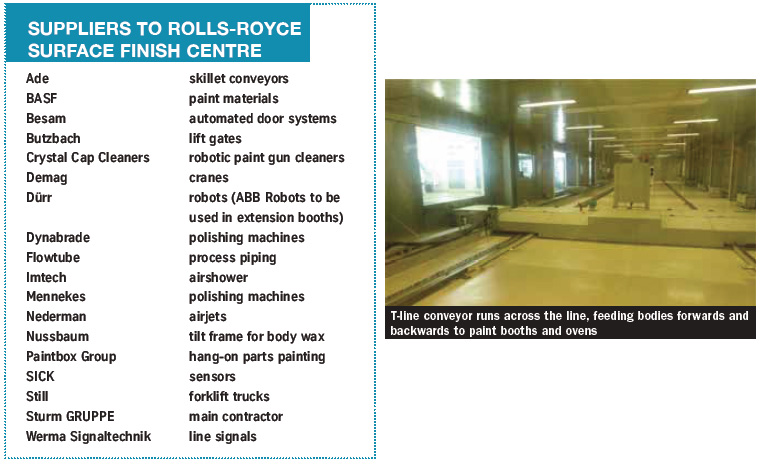 All paint layers are applied partially by robot (the only robots in the whole assembly plant) and partly by hand. Some impressive painting skills are displayed by the operators; the radiator/front end frame is painted a satin black by hand without any masking, such is the skill of the painter that no overspray is left on the body colour.

The reason for painting the frame a dull colour is that otherwise the customer could possibly see body colour by looking through the radiator grille at an angle, and this is not acceptable in Rolls-Royce quality.

Hang-on parts for special colours are painted with the car; standard colours are painted by supplier Paintbox Group, special colours onsite in a separate manual booth, using reference pieces run through the main paint line with the body. The mix of automated and manual paint operations is quite different to any high-volume paint line; for example, the main underside of the bonnet is painted by robot and then a 10-minute manual application sees an expert painter cover the hinges and hinge end of the bonnet, and the sides, to perfectly cover the areas that the robot cannot reach accurately. One very special feature of the cars means full automation is very unlikely, as Wilkes says: “The rear coach doors (opening at front, hinged at rear) mean that full robot painting is impossible; we cannot get a truly even layer of paint on to them with a robot and of course we need a fairly high build to allow for all the polishing later.” At present one booth is used for all primer and basecoat and one for all clearcoating.

Baked and polished to perfection – at a price
After the water-based primer coat, the body is baked for 10 minutes at 80°C, then 30 minutes at 140°C, followed by a 10 minutes cool-down stage. Basecoat is given a 10 minute 80°C flash off before the first clearcoat is applied electrostatically. This is then baked for 20 minutes at 145°C and the second clearcoat is given 40 minutes at 145°C. Both coats are ‘cut in’ by hand and then finished by robot. Paint engineer Warren Gilbert explained the reason for the primary clearcoat oven time: “We bake the first clearcoat for 20 minutes as this gives us better adhesion of the second coat, allowing us to get the high build we are looking for.”

Two-tone bodies and horizontal coach lines are offered as paint options. The coach lines, which take three hours to complete, are hand painted by highly skilled craftspeople. Customers can choose from a selection of 18 standard colours, although the full scale of the palette runs to 45,000.

Hand finishing is key to the Rolls-Royce ethos and quality standard; each car is sanded and polished for at least four hours by four ‘associates’, starting with 1500 and 3000 grit paper and moving on through various cutting and polishing compounds. This is facilitated by the high build, as Wilkes confirms: “With the two clearcoats, we are getting a build in the 120-150 micron range, with a typical basecoat of 30 microns.” The roof and bonnet are generally not sanded or polished as their horizontal surfaces get fully ‘wetted out’ by the paint application and do not suffer from any ‘orange peel’ or similar problems. The bodies are lifted on skillets for polishing, making for optimum ergonomics and the best sightlines for detecting any flaws and to achieve the glass-like finish that the Rolls-Royce customer expects.

All this fine handwork does cost, as Wilkes says: “With a minimum of 16 hours highly skilled labour and with the materials cost of around double that of the paint itself, polishing is the most expensive part of the whole process but, as Rolls-Royce's co-founder Sir Henry Royce said: ‘The quality remains long after the price is forgotten’. 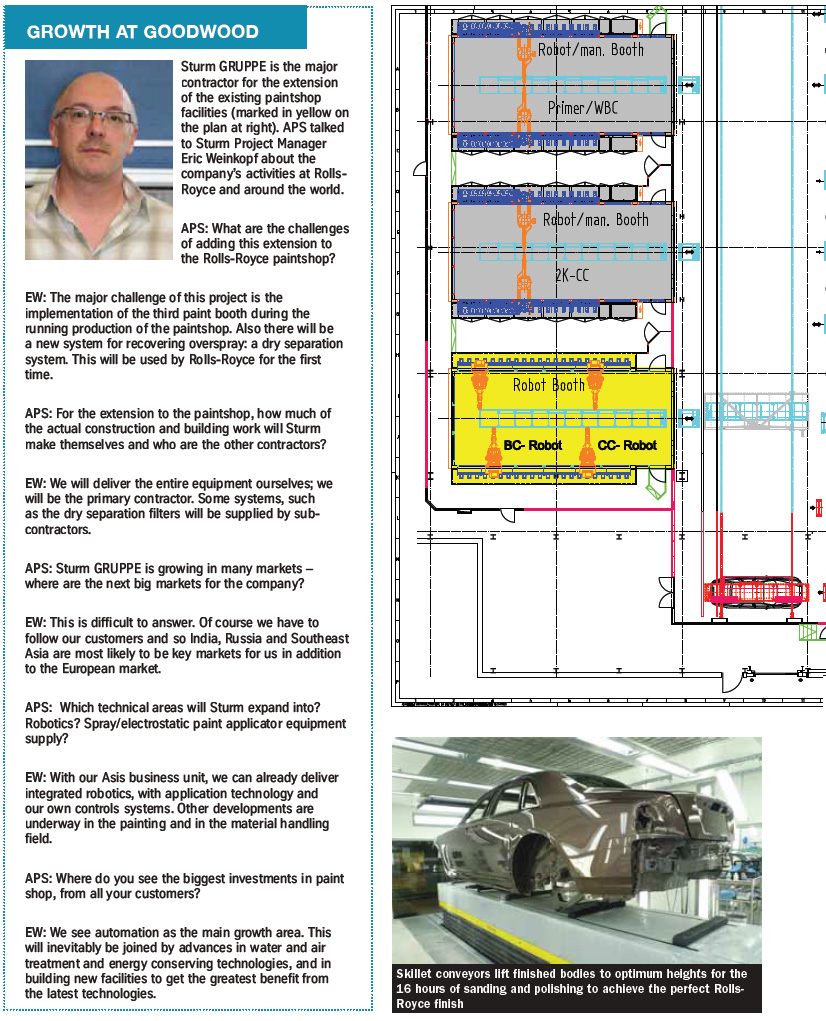 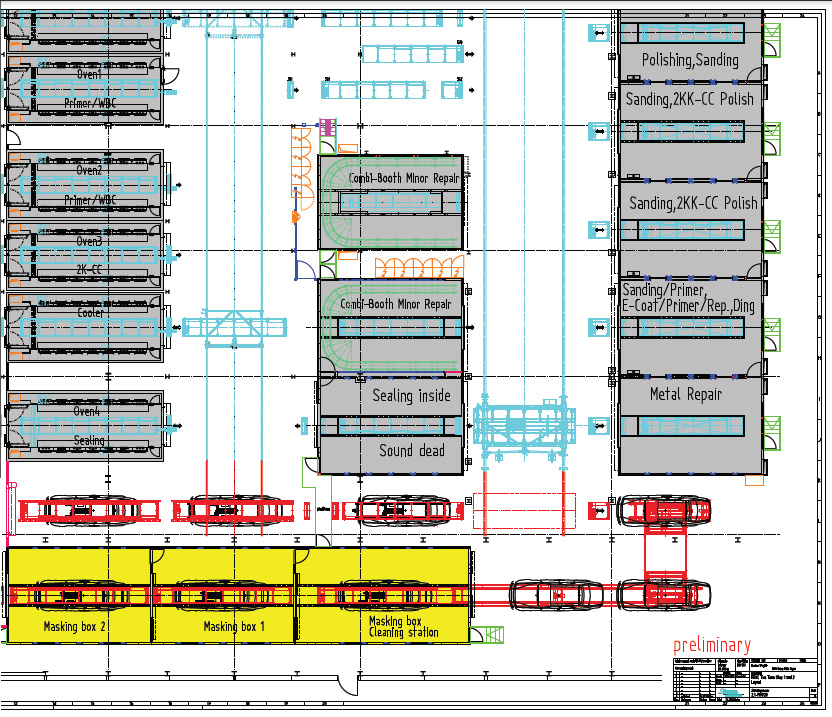 Waxing the body beautiful
All body cavity wax is applied by hand, with 59 different nozzles used on each side of a Ghost body and 65 different ones for an extended wheelbase Ghost, to inject 1.8 litres of a waterbased wax.

The Phantom is almost all aluminium; only the steel bootlid is injected, along with the bonnet hinges. No heat is used to distribute the wax but after treatment, the bodies are tilted on a Nussbaum tilting lifter, with a cycle of lifting the back and holding in that position for 12 minutes, horizontal for one minute and then front end lift and hold for 8 minutes. Both Phantom and Ghost travel through the tilt station, but only the Ghost is tilted.

Time for expansion
Wilkes explained the planned expansion of the Surface Finish Centre (as per the diagram above, an insight exclusive to APS): “The present masking booth will be removed and a new static (forward in, backward out) base- and clearcoat spray booth with a dry scrubber (a first for Rolls-Royce) will be installed; this will use four ABB robots. Three new masking boxes will extend nine metres out of the building; these will be served by an extension to the present ‘T-line’ conveyor.”