When it comes to coating automotive plastic parts, pre-treatment has a decisive influence on the paint quality, and the previously popular power wash systems are being replaced by cleaning techniques which enable a more economical and eco-friendly pre-treatment. On the one hand, plastics and fiber-reinforced plastics often make it possible to manufacture lighter automotive components and/or to produce parts less expensively, or integrate the functions of several workpieces into a single part.

On the other hand, the nature of plastic surfaces is a significant challenge for painting. Residues from the manufacturing process can be a considerable challenge. For example release agents, wax, additives and dust and dirt contamination from transport and storage can combine with plastic flash pieces to impair coating quality.

Furthermore, the trend towards water-based paints and process-reduced coatings is placing greater demands on substrate surfaces. This makes reliable cleaning or pretreatment absolutely imperative. Traditionally, a power washing system with an aqueous cleaning agent and a downstream water dryer is used. This is a reliable but unfortunately cost, space and energy intensive process.

Additionally, due to very complex geometries it sometimes can’t be used. Due to these characteristics the conventional cleaning system is being replaced more and more frequently with alternative innovative cleaning processes such as CO2 snow-jet cleaning.

Snow at supersonic speeds
CO2 snow-jet cleaning is a dry and residue-free technique. It uses liquid carbon dioxide as cleaning medium, which is fed 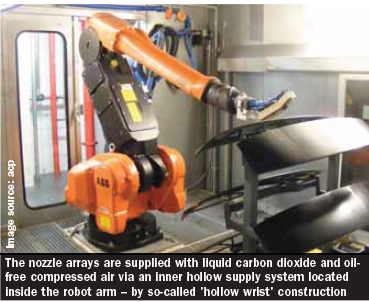 from bottles or tanks. One of the systems most popular in the automotive industry has been developed by acp – advanced clean production. Compared to conventional wet cleaning systems the technique enables savings up to 50% for investment costs, 20% for operating costs and up to 80% for floor space requirements. Additionally, the compact systems are easy to integrate into the painting line.

The ‘heart’ of the acp system is a patented cleaning head designed as a supersonic two-component ring nozzle. As the fluid carbon dioxide exits the nozzle, it expands to form a snow/gas mixture, which forms the core jet. In addition, compressed air is forced in as an air-jacket jet that accelerates the CO2 snow to supersonic speeds. The fine snow crystals remove both particulate contaminations such as particles, swarf, dust, and filmy residues, such as processing media. The cleaning capability depends on three effects:

Sublimation effect
The transition of the CO2 from solid to gas produces a pressure wave. This results in a volume increase, which supports the two previous functions.

As the carbon dioxide transitions to the gaseous phase the material to be cleaned is immediately dry. This negates the energy-intensive drying processes needed by conventional wet-chemical methods. No cleaning or rinsing residues remain. The carbon dioxide used for the CO2 snow-jet cleaning process is usually created as a by-product during manufacturing processes in the chemical industry and is therefore environmentally neutral.

Reducing reject rates at Volkswagen
The CO2 snow-jet cleaning technique from acp has proven its efficiency in various applications in the automotive industry worldwide, for example at Volkswagen Plastics Technology in Brunswick (Germany). One of the components produced is a decorative panel made of ABS-PC blend (ABS – Acrylonitrile- Butadiene-Styrene, PC – Polycarbonate). Although the part already has a high-gloss surface on leaving the injectionmolding machine, it is subsequently coated with a layer of high-gloss metallic paint to give it a sophisticated finish. This paint is applied to the component as a single layer without an undercoat, so the surface has to be flawless. The tiniest dust particle or water mark would cause rejects. Therefore, the OEM needed a cleaning solution that is efficient, gentle on materials and guarantees consistent results.

The project managers at Volkswagen and acp developed a customized system configuration in line with the range of components produced at VW Plastics Technology. It is made up of a nozzle array containing seven cleaning nozzles and is controlled by a robot. Workpiece-specific cleaning programs are filed for each of the approximately 20 different interior components that need to be cleaned. The parts get cleaned in a continuous process. The components are placed on an upright workpiece holder and the robot arm moves along them in vertical and horizontal directions. This procedure can also be accomplished when the workpiece holder is in a horizontal position.

The cleaning system has been integrated into a booth fitted with a continuous extraction unit. This prevents cleaned parts from becoming recontaminated by dirt that has been removed. The CO2 snow-jet system has been running in three-shift serial operation at the Volkswagen works in Brunswick since August 2010. It is used to clean several thousand plastic parts every day. Apart from the advantages shown in the cost-benefit comparison and a higher, reproducible cleaning quality, the CO2 snow-jet cleaning has also enabled reject rates to be lowered by around 3%.

Efficient cleaning at BMW – even in delicate cavities
The BMW works in Landshut (Germany) first replaced its power wash system prior to primer application with the CO2 snow-jet technique made by acp. And in a second application the OEM has implemented a system into the topcoat line. The reasons that wet-chemical processes were rejected were firstly the need to reduce energy and water consumption and waste water production and secondly, to increase costeffectiveness and component quality.

For serial operation, the CO2 cleaning system has been designed to clean components of all shapes and sizes made of a range of different plastics. Carrying out particle measurements and making optical comparisons and analyses to detect residues on the surfaces as well as by performing technological tests to assess paint adhesion and optical appearance proved this.

Based on the results of the cleaning tests, a customized system configuration in line with the spectrum of parts to be cleaned has been developed. The result is a robot system fitted with three snow-jet nozzle arrays. Depending on the part to be cleaned, the arrays are automatically turned on and off individually, via the robot controls, according to a componentspecific cleaning program stored in the control system. The arrays are supplied with liquid carbon dioxide and oilfree compressed air via an inner hollow supply system located inside the robot arm. The cleaning system has been integrated into a cabinet of a painting booth.

By replacing the power wash system with the snowjet process, cleaning has become more economical and sustainable. In addition valuable production space has been gained. A further benefit of dry cleaning has been an increase in design freedom because it no longer matters if parts made of plastic or fiber-reinforced plastics have water-drawing geometries.