BAIC, China’s largest electric vehicle manufacturer, is working together with Siemens to create a brand-new digital factory at its plant in Changzhou 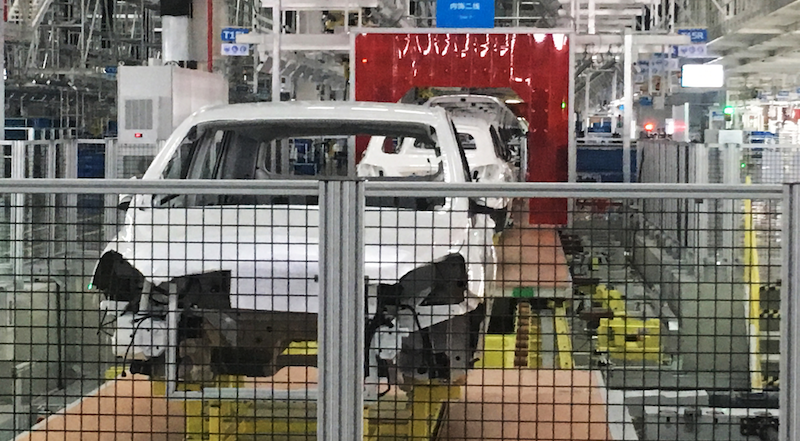 For over a year Wang Hongwei, the person-in-charge of production technologies at BAIC’s plant in Changzhou, has been putting all his energies into supervising the building of a new electric car plant. This CNY10 billion, alternative-energy facility project will see the construction of a new production plant for BAIC Group’s subsidiary Beijing Electric Vehicle Co. (BJEV). The project is part of BAIC’s strategy to establish a presence all over China and make forays into the area of new energy, and is seen as a milestone in realising the objective of China Manufacturing 2025. Growing awareness of the need for environmental protection, as well as strong support from the Chinese government, has seen the country’s electric vehicle industry achieve explosive growth in recent years. BJEV is the first company in China to obtain the qualification for the manufacturing of electric vehicles (EV) and since its founding in 2009, it has worked on the research, development and manufacturing of EVs and offers key technologies, such as vehicle system integration, control and electric drive systems.

The company is also one of the Chinese electric vehicle enterprises that owns the three core technologies of battery, electric motor and electronic control. In 2016, the company sold 51,000 vehicles, an impressive increase of 153.4% compared with the previous year’s sales. This investment in the new plant represents an important milestone for BJEV, helping the company to compete at a high level with international industry competitors. Given the project’s tight deadline (the first battery electric motor car was expected to roll off the production lines in less than six months) and the stringent delivery standards that were put in place, the company had no choice but to consider automation solutions and engineering service vendors that were of a similarly high level and quality.

Outline of the smart blueprint

The proposal of the Industry 4.0 concept and the China Manufacturing 2025 vision, has offered a grand blueprint for smart manufacturing and the digital factory is the basis for realising this blueprint. “Compared to other industries, the automotive industry has advanced the most in the area of digital transformation,” said Xia Wei, who is in charge of the auto business in Siemens China. “According to the results of a survey conducted by the Chinese Academy of Sciences, the highest-ranked and most respected academic institution in China, if Industry 3.0 and Industry 4.0 are to be rated at 3 and 4 points respectively, then the current average score for Chinese manufacturing is 2.75.

On the other hand, Siemens China has also conducted a market evaluation for the passenger-car market in China, which found that the average score here is 3.42. We expect that by the year 2025 a small number of automotive enterprises will have achieved digital transformation and advanced to the level of Industry 4.0 or beyond. However, there will also be a good number of enterprises stuck at the 3.X level and thus lose their original positions in the era of digitalisation.” The decision to choose Siemens as its partner for automation and digital manufacturing strategy was based on BJEV’s goal to realise smart manufacturing for EVs. “This was not only due to Siemens’s forward-looking technology architecture and product standards. The company’s outstanding engineering services can also help us improve engineering flexibility and productivity. ” Said Wang.

Three phase project There are three phases to Changzhou plant project. Phase I (valued at CNY1.5 billion) was completed in early 2016 and the newly built 10.2-ha, Yingtian Auto Plant production facility has an annual production capacity of 50,000 EVs. Phase II, with a planned investment value of CNY8.5 billion, is expected to increase the production capacity to 150,000 units when a new 133.3-ha facility is completed. Phase III will focus on partial reconstruction and upon the completion the production capacity is expected to increase to 300,000 units per year. Currently, in both Phase I and Phase II, Wang’s team has been able to meet engineering deadlines swiftly and smoothly utilising the Totally Integrated Automation (TIA) solution under a single TIA Portal engineering platform. Siemens’ TIA Portal, functioning as the data foundation of production engineering, plays a central role in the digitalisation of the shop-floor, by connecting virtual and real manufacturing, and realising collaborative, flexible smart manufacturing.

“We are seeing an increasing number of configurations and options with automobiles, making production increasingly complex. On the other hand, we, as the manufacturer, also hope to realise faster time to market to address market needs. This is without doubt a big challenge,” said Wang, “During the project implementation phase, the use of the TIA Portal allowed BJEV’s engineers to do virtual commissioning using virtual controllers that enabled early error detection and swift functionality validation, even during the configuration and engineering phases. This digital technology changes the way of engineering from series to parallel, thus significantly shortening the ramp-up time of a car plant.”

A new era for engineering technologies

For Wang’s Electric Automation team the smart manufacturing blueprint remains the vision. What the team needs to tackle now is how to accomplish all the automation engineering tasks in the welding, painting and assembly workshops in a short time period, and ensure that there is enough flexibility for future changes in production design. “Right now, it looks highly possible,” Wang remarked. The performance of Siemens’ TIA solution has been well tested at the Changzhou plant, meeting multiple challenges, such as improving production line efficiency, implementing mixed-line production and performing large-scale customised manufacturing. Products such as the Sinamics drives, the Simatic HMIs (Human Machine Interface), Simatic ET-series IO and the latest Simatic S7 1500-series PLC products have been integrated in the TIA Portal and play their respective roles. Siemens’s automation hardware has exceeded the expectations of the BJEV Changzhou plant. In Wang’s opinion, the TIA Portal can certainly be termed a product that heralds a new era in engineering technology. He said, “For instance, we have been able to deeply experience the design of ‘devices and networks’ and the management of ‘tag-table’. This is truly intuitive and convenient, and has helped us to shave a good amount of time off our work. Even if there are changes later on, these are very easy to implement. ”

For a newly built plant, training the personnel can also be a challenge. The TIA Portal, which uses a standard template for appearance and navigation design, has enabled Wang’s new Electric Automation team to get familiar with the engineering environment in a short period of time and focus their energies on process control of the production line. Siemens’ engineering framework speeds up the tag-database management process, so even with a complex array of target equipment, tags only have to be entered once before they can be used across all editors. “Even though there are frequent changes to new production lines, the updates can be realised in real-time across all connected equipment”. The improvement in data uniformity and transparency has dramatically reduced the number of errors made in the project and therefore significantly enhanced the quality of the automation project. The concept of Green Mobility, exemplified by the electric vehicle, is changing the way we live and think. Meanwhile, the path to digitalisation at shop-floor level with Siemens’ TIA Portal is set. This enables China’s automotive manufacturers to enter into an era of smart manufacturing and realise a green automotive future.