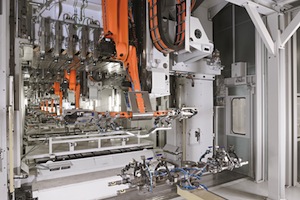 Germany – Servoline L, which is suitable for the production of both steel and aluminium parts, including high-strength steel (HSS), is now operational at a premium car manufacturer. Reaching speeds of up to 23 strokes per minute, its maker says it is the fastest press line in the world.

The compact line is equipped with a blankloader, a comprehensively redesigned Crossbar Feeder and an end-of-line system. Schuler says its ServoDirect Technology not only ensures a high output but also flexibility, energy efficiency and low part costs.

In the first stage, two Crossbar Robots supplied by Schuler alternately remove the tailored blanks and place them on a conveyor belt. If required, the blanks are washed, lubricated and fed into the optical centring station. Two robots programmed with data from a camera then position the blanks so that the Crossbar Feeder can deliver them with precision into the first press. The drawing press is equipped with a servo-hydraulic bed cushion to safeguard component quality.

The parts are transferred from press to press by the Crossbar Feeder, which features two additional servo axes to enable it to re-orientate two-out parts. The axes can be independently swivelled, turned or moved at right angles to the direction of transport – a flexibility which opens up new design possibilities for the dies.

After the last forming stage, the Crossbar Feeder hands over the parts to a shuttle and two robots lay the finished components on conveyor belts. The die and tooling change is fully automated and can be completed in three minutes, allowing short changeovers.