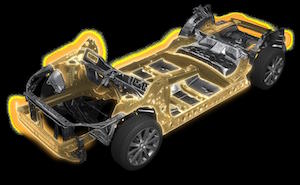 Japan – Currently under development, the architecture will be used for all of Subaru’s next-generation vehicles, together with horizontally opposed engines, symmetrical all-wheel drive and EyeSight driver-assist technology. It is part of the company’s mid-term plan, ‘Prominence 2020’, which was announced in 2014.

According to Subaru, the platform will improve performance, comfort and safety, as well as making its models adaptable to electrification. The manufacturer says it will:

– boost straight-line stability by increasing the rigidity of the body and chassis by 70-100% over current models, improving the suspension system and lowering the centre of gravity by 5mm

– suppress noise and vibrations by enhancing torsional rigidity by 70% over present models, with an optimised frame structure and stronger joints

– improve comfort by increasing the rigidity of the suspension mounting, and mounting the rear stabiliser directly on the body, reducing the body roll by 50% compared with current models.

Subaru says that active safety will be improved by the lower centre of gravity, greater rigidity and improved suspension system. Passive safety will be enhanced through 40% better energy absorption in the event of a collision, arising from the frame structure and the rigidity provided by the increased use of high-tensile steel plates, some formed by hot pressing.

The new platform will provide a unified design concept for all Subaru models, with the flexibility to modify the main specifications. This will extend to hybrid vehicles, plug-in hybrids, electric cars and “other types of alternative power units for which demand will increase further”, says the OEM.

As well as reducing development demands in terms of personnel and facilities, the unified design will enable Subaru to make parts for multiple models in the same facility. The vehicle-maker added: “The new, unified design concept will also make it easier for our two factories in Japan and the Subaru of Indiana Automotive plant in the United States to carry out bridge production of multiple different models on a single line, making our global production system more flexible.”

The Subaru Global Platform will debut on the next-generation Impreza, which will enter the market later this year.