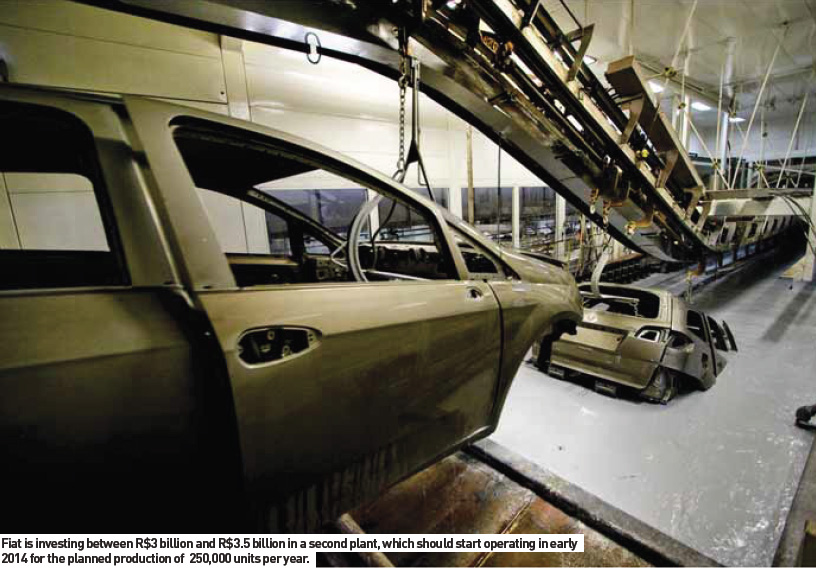 Brazil already has a large automotive manufacturing sector, which has grown strongly over the last 20 years. Today, there are 20 vehicle makers in 38 factories established in the country who employ 128,000 people. The current production capacity is around 4.3 million vehicles per year and there are several new projects (including Asian vehicle makers) in progress. But the government wants growth in this sector to continue.

Innovate Auto
A new automotive programme, called ‘Innovate-Auto’, will begin in 2013, with completion scheduled for 2017. This is programme aims not only to encourage new manufacturers to come to Brazil but also to induce OEMs already based in the country to invest in and expand the existing production lines. Minister Pimentel commented: “We are the fourth largest car market and the seventh largest producer. There is no reason for Brazil to not also be the fourth largest car manufacturer in the world.” He added that the goal of the programme is not only to increase the number of vehicles produced, but also improve the quality of them. Some stimulant measures of the Innovate-Auto programme contain a strong technical component, especially with regard to the development of more economical and less polluting engines.

The main driver of this programme will be tax benefits - hence the active participation of the Ministry of Finance. The programme text proposes to reduce the high taxation on industrialised products (IPI), by 30% for vehicle makers who are willing to make six manufacturing investments in the country by 2013. That number will rise to eight in 2016, involving at least 80% of cars and light commercial vehicles manufactured. The tax incentive (which will be at a minimum rate of 70%) will also be granted according to the level of investment in research and development, engineering and regional purchases of components and tools. In the case of foreign companies willing to invest in Brazil, the requirements will be staggered, with the indexes being higher than those for companies already in the country.

Fiscal stimulus
It’s expected that this government fiscal stimulus, which will also make the cost of producing vehicles cheaper in Brazil, will increase investments in the automotive industry beyond the $22 billion made between 2011 and 2015, and reduce car prices for consumers.

The push to improve the vehicle technology is also aimed at increasing the competitiveness of Brazilian built cars in the international market. Brazil exports only 15% of its vehicle production, with the majority of these going to Argentina and Mexico. Brazil has ‘automotive agreements’ with these countries allowing no surcharges on imports and exports. These agreements especially favour OEMs that are established in the participating countries, such as Volkswagen, General Motors, Ford, Fiat and Honda, which can produce parts for these models and markets, avoiding duplication of facilities and tooling. 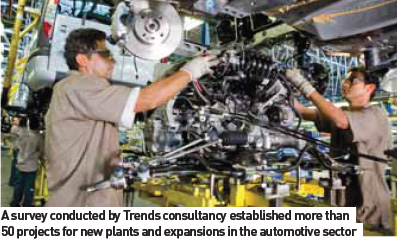 The package has been popular among those companies already established in the country and those with plans to build plants in Brazil. The National Association of Vehicle Manufacturers (Anfavea) revised their projections and estimated that investments in the Brazilian automotive sector should total between $25 billion and $30 billion by 2017, as a result of the incentives. “It is a transforming programme, which will have an impact on the structure of the Brazilian automotive industry,” said Luiz Moan, vice president of Anfavea. 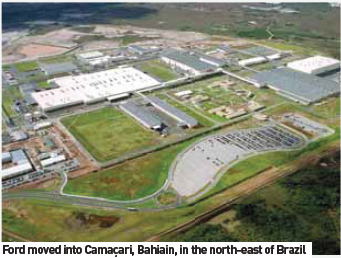 Following on from Mercedes, Volkswagen, General Motors and Ford truck plants were established in the region. The state of São Paulo (Brazil’s richest and holder of about 30% of national GDP) offered good infrastructure and the proximity to the largest consumer market in Brazil. This picture began to change in 1976 with the arrival of the fourth major vehicle maker, Fiat. The Italian company chose to settle in Betim, a city in the metropolitan region of Belo Horizonte, capital of Minas Gerais, a state in the southeast of the country. However, the decentralization process was slow because until 1990, 75% of the automotive industry was concentrated in São Paulo. Union pressures, lack of space to expand, high land prices and especially the tax incentives offered by other states and cities to automakers encouraged the auto industry to move out of ABC.

The great movement began between 1999 and 2001. Volkswagen opened facilities in Pinhais, in Paraná, south of Brazil. GM built one of its main plants in Gravataí, in the state of Rio Grande do Sul, and Ford was modernized with a plant in Camaçari, in Bahiain the northeast region, which includes some of the poorest states in Brazil. Automakers that arrived more recently to compete with the big four, included Honda, Toyota and Hyundai. While Renault-Nissan alliance chose Pinhais, Paraná, PSA Peugeot Citroën, chose Porto Real, in the south of the state of Rio de Janeiro.

By 2011, however, nearly half of the cars produced in the country (42.7%) still came from the state of São Paulo, of which, 60% left the ABC, according to Anfavea. But the new sector investments spread across the country. Starting with Fiat, which has invested around R$3.5 billion in an ultramodern factory in Goiana, Pernambuco, to be inaugurated in 2014. The president of Fiat Latin America, Cledorvino Belini justifi es the new location: “Pernambuco has consolidated itself as the state that has had the biggest development over the Northeast, the region with the greatest potential for consumption in the country”.

The issue of imports
This increase in scale was considered strategic by the industry, both as a way of blocking imports of vehicles - which last year already accounted for almost 5% of domestic sales, and to meet Brazil’s growing demand for new cars. The increased income of Brazilians in general, due to the strengthening of the economy, has made the new car sales soar, and there is still potential for further growth. Currently there exists a ratio of seven people per vehicle in Brazil. Even with the slight downturn in the economy last year, sales totalled 3.6 million vehicles, up from 3.1 million in 2010. And the forecast for 2012 is 3.8 million units sold. The ‘new consumers’, graduates of the C, D and E classes, already account for sales of approximately 20% of new cars produced in the country. In 2005, sales amounted to just 1.7 million units. For the government, boosting vehicle production is considered a strategic action due to the important role that the automotive industry (including manufacturers of auto parts there that were being decimated by imports) plays in Brazil.

The sector accounts for 22% of Gross Domestic Product (GDP) and the country’s industrial sector supports the well-developed capital goods industry in Brazil. So that when the automotive industry expands, the entire industrial economy expands also. “It will be necessary, however, to observe if this desire for large scale nationalisation of Brazilian automotive production is feasible in the short term,” warned Reinaldo Muratori, director of the Brazilian section of the Society Automotive Engineers (SAE). “The multiplication of automakers will greatly increase the demand for domestic auto parts. But today, even the automakers here now resort to imports, both for reasons of cost and, in some cases, the volume, “ he added. It’s expected that a wave of new automakers will enter Brazil, most of them from Asia, such as the Chinese Changan, Haima, Jimbei and Hafei and South Korean Ssangyong and Germany’s BMW and Land Rover Anglo- Indian, eager to establish themselves in this growing market. It remains to be seen if all these vehicle makers (as the government hopes) will actually make the anticipated investment in the country. A survey conducted by Trends consultancy established the existence of more than 50 projects for new plants and expansions in the automotive sector (including car and truck). The purpose of these investments will be to expand production capacity and develop new models. This includes projects from the ‘big four’ - Volkswagen, Fiat, General Motors and Ford - who together hold 75% market.

Investment in production
At GM, for example, the R$4.5 billion for its investment programme between 2008-2012 left only R$1 billion to be disbursed. The funds are being spent on the renovation of production lines and nine releases. “We are in very special year, in which we complete our planning, which started in 2008,” said Grace Lieblein, who been president of GM Brazil for a year and a half. “We are launching all new vehicles in the Brazilian market and this allows us an excellent opportunity for growth.” Fiat is, for its part, investing between R$3 billion and R$3.5 billion in a second plant, which should start operating in early 2014 for the planned production of 250,000 units per year. The Italian automaker’s plant is located in the city of Goiana, in the northeastern state of Pernambuco.

Newcomers are also investing. PSA Peugeot Citroën will invest R$3.7 billion in Porto Real in the state of Rio de Janeiro, to double its production capacity to 300,000 units. The new Asian automakers are also moving ahead.

In September Toyota started operating plants in Sorocaba (investment of $600 million and capacity 70,000 units per year) and Hyundai in Piracicaba (investment of $600 million, to produce150,000 units per year), both in industrialized cities located within the state of São Paulo. The Chery has already begun the work on a plant in Jacarei, also in São Paulo, and will soon be followed by JAC Motors, who will build a factory in Camaçari, in Bahia. Suzuki plans to invest in Itumbiara, the state of Goiás, in the Midwest, and Nissan, plans to spend R$2.6 billion building a plant in the city of Resende, in the state of Rio de Janeiro.

Excess capacity
According to a survey by the Roland Berger consultancy, investments by automakers in new factories and expansions to existing plants in Brazil will raise the production capacity of cars and light commercial vehicles by almost 60% in the country by 2017, adding 2.5 million units to the current installed capacity of 4.3 million. “The problem is that if all the planned investments materialised, we may have excess capacity in 2017,” said Stephan Keese, director of the consultancy that specialises in the automotive industry. “This scenario may lead to a price war and erode profitability.”

One of the less explicit goals of the Innovate-Auto is to shield the domestic market to competition from imported vehicles. Regulations that are in effect until 2017, limit the maximum number of cars that importers can bring from abroad without the rate of 30% tax on IPI being added to the 35% import tax. Without IPI, foreign vehicles compete on price by offering more standard and modern equipment when compared to cars manufactured in Brazil.

The new rules allow companies that do not have factory in Brazil to import without paying IPI on a volume that represents the average imports of the last two years, to the maximum of 4,800 units. There is an exception for vehicles imported from Mexico and Mercosul countries, which Brazil has trade agreements with. The announcement of Innovate-Auto was not received with great enthusiasm by the Brazilian Association of Importers of Motor Vehicles (Abeiva), representing 29 brands, such as Chery, JAC, Kia, BMW and Audi. “Brands with the highest volume of sales will suffer because, for names like Kia, 4,800 a year is a low number,” says Ricardo Strunz, director of Abeiva. “It was below expectations.”

The concerns of the executive of Abeiva are real. Since the IPI of 30% was established by the government in December 2011, sales of imported cars have fallen dramatically. At its height the imported car market had sales of 24,000 units. In September this year only 9,000 vehicles were sold, a decline of approximately 60% over the same month in 2011. For Abeiva, government restrictions are exaggerated, since the vehicles imported by its members never exceeded 5% of the market. Another effect of this policy is unemployment. The sector, which employed 35,000 people in January this year, is expected to start 2013 with 15,000 fewer jobs.