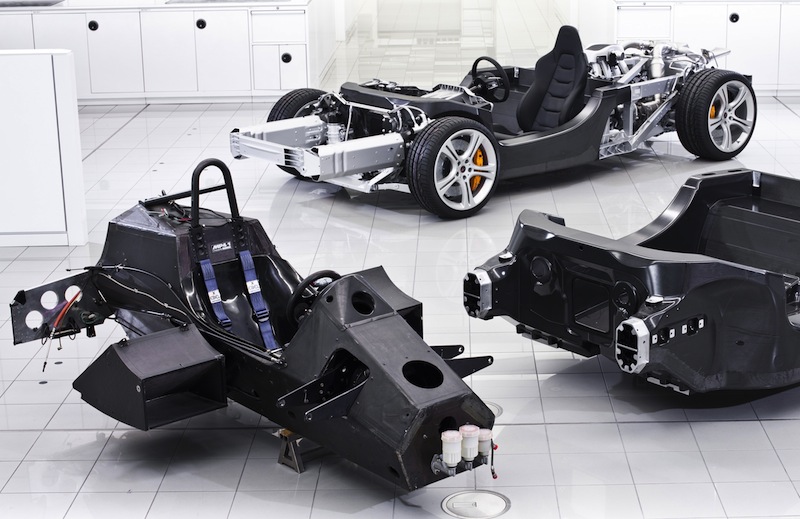 The phrase ‘the right material in the right place’ has become something of a mantra for vehicle-makers in recent years in their efforts to reduce the weight of their cars. While the use of aluminium is increasing, many OEMs are turning to composites, and developing technologies that enable their incorporation into vehicles at a rapid pace.

The use of discontinuous glass and mineral fibre-reinforced plastics for the production of non- and semi-structural parts is well established in the automotive industry – both the Ford Thunderbird and the Chevrolet Corvette featured glass fibre-reinforced plastic (GFRP) bodywork. These materials are relatively inexpensive and the methods used to form them into components, such as compression and injection moulding, are quick and efficient.

GFRPs have been used to produce manifolds for the high-volume automotive sector for approximately two decades. By using GFRPs, designers have found that not only can they reduce the weight of these components, they can also integrate a variety of features that would require the production of further parts – and further assembly steps – using metals. Take the GFRP air-intake manifold (AIM) featuring an integrated charge air cooler (CAC) designed – almost certainly – for BMW’s i8 hybrid sportscar; integrating the CAC into the AIM reduces the length of the air duct and improves the responsiveness of the engine. This enables the engine to deliver high-level performance while still meeting emissions regulations.

According to DSM, the 40%-by-weight glass fibre-reinforced polyamide (PA) 46 (Stanyl Diablo) it provided for the production of the AIM is 40% lighter than aluminium. The GFRP combines good mechanical performance with high resistance to heat. The component is assembled from several mouldings using hot gas welding and is resistant to pressure pulsation loads. Moreover, the parts show good dimensional stability.

The thermoplastic liftgate of the 2014 Nissan Rogue further typifies the opportunity that GFRPs present to reduce the number of components needed when producing a part, while reducing its mass. The liftgate is 30% lighter than comparable stamped steel systems, which helps to reduce the fuel consumption of the Rogue by 10%.

Vice-president of Product and Process Development at Magna, Tom Pilette, says: “The running lights, all of the trim, all of the electronic functions including the wiper motor are all integrated and assembled in a single process.”

Magna Interiors injection-moulds the liftgate at its Decostar division. The outer panel of the liftgate is made from a stiff, impact-resistant polypropylene (PP) resin ­– mineral-filled Hifax 1175P TYC – from LyondellBasell. The inner panel is fabricated using MIC colour long glass fibre (LGF)-reinforced PP from Advanced Composites, the high surface quality of which eliminates any need for painting – thus saving money and reducing emissions of volatile organic compounds (VOCs). Nissan anticipates that the liftgate will feature on more than 130,000 vehicles.

LGF-PP is used widely in automotive front-end carriers, instrument panel carriers, door panel supports, consoles, pedals, under-body shields and a number of other applications. According to a recent report by AMI Consulting, the use of the material will increase by 8% a year.

Carbon fibre-reinforced plastics (CFRPs) are significantly stiffer and lighter than GFRPs and metals, and they are strong enough to be used in structural applications. However, CFRPs are expensive and the methods used to form components from them are relatively slow. As such, their use has mostly been limited to the production of low-volume, high-value sportscars.

High-tech & handmade
For example, the methods used by Ferrari to produce the CFRP chassis of its flagship LaFerrari hybrid supercar bear more resemblance to an artisan craft than an industrial process. The prepreg (pre-impregnated) fabrics and tapes used to produce the chassis of the LaFerrari are manually laid up on a mould at the Italian manufacturer’s facility in Maranello, where Scuderia Ferrari’s single-seat Formula One cars are also made.

In comparison with the CFRP chassis of the Enzo Ferrari, this latest design is 20% lighter and demonstrates increases in torsional rigidity and beam stiffness of 27% and 22% respectively. Fabrics and unidirectional tapes made of intermediate-modulus T800 carbon fibre are used to produce the supercar’s tub. High-strength T1000 carbon fibre unidirectional tapes and fabrics are used in the areas of the chassis that are important for passenger protection, such as the sills. The high energy-absorption characteristics of T1000 enable these structures to pass strict side-impact legislation tests. Structural elements of the body are made using unidirectional tapes and fabrics of M46j, which is rigid and light.

For the production of the LaFerrari’s underbody, carbon fibre is combined with aramid fibres (Kevlar from DuPont), which increase the structure’s resistance to impacts from road debris. After it has been laid up, the chassis is baked in an autoclave in two phases between 130°C and 150°C, using vacuum bags to remove any voids in the laminates.

Only 499 LaFerraris will be produced using this slow, expensive and labour-intensive process, but each will retail at more than £1m ($1.6m).

Resin-transfer moulding
For the production of CFRP components in higher volumes, carmakers – including Ferrari competitor McLaren Automotive – and their suppliers are turning to resin-transfer moulding (RTM) processes. Using RTM, a preform or dry fibre reinforcement is packed into a mould cavity, which is then closed and clamped. A catalysed, low-viscosity resin is then pumped into the mould under pressure, displacing the air at the edges, until the mould is filled. After the fill cycle, the cure cycle starts; the mould is heated and the resin polymerises to become a rigid plastic.

In 2010, McLaren awarded a €150m ($188m) contract to Mubea Carbo Tech for the production of 25,000 CFRP monocoques over eight years using an RTM process. Carbo Tech, which also supplies CFRP monocoques for Porsche’s 918 Spyder and Volkswagen’s XL1, claims to be able to manufacture ten of these structures per day.

BMW is unique in being the only carmaker that can produce CFRP structural parts in anything approaching high volumes. The German OEM has developed an RTM process for the production of CFRP components which it has steadily refined and automated over the last decade. It claims that it has cut the cost of producing CFRP body components by around 50% over this period. By using CFRP to produce the monocoque of its hybrid citycar, the i3, BMW has reduced the weight by 50% and 30% compared with steel and aluminium respectively. 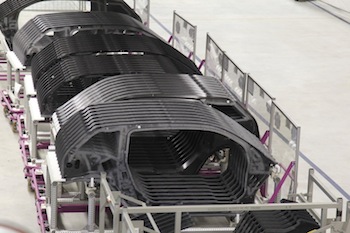 The production of the monocoque at BMW Leipzig is highly automated and begins with the preforming of stacks of carbon fibre received from the company's plant in Wackersdorf. The preforming of these stacks gives them a stable structure and enables them to be joined into larger components – a difficult and expensive process with steel or aluminium. For example, nine preforms are used to make a sideframe for the i3.

These preforms are then joined and subjected to a high-pressure resin-transfer moulding (HPRTM) process, which enables the use of fast-reacting resin systems that wet the preforms quickly and efficiently – prerequisites for short cycle times.

Using HPRTM, a self-cleaning, high-pressure mixing head injects an epoxy system (Araldite LY 3585/Hardener XB 3458) from Huntsman Advanced Materials into the closed cavity of the mould and saturates the dry fibre preform inside, under high pressure. The duration of the process and the temperatures used are controlled precisely so that the resin and hardener are fully networked.

Compared with vacuum infusion and autoclave processes, cycle times are reduced from up to 24 hours to a matter of minutes, depending on the complexity and size of the component. Huntsman's system can cure in just five minutes at 100°C, meaning that an autoclave is not required. The part can be demoulded after just ten minutes.

The monocoque consists of significantly fewer components than comparable metal structures and these are joined together by robots using a polyurethane (PU) adhesive. The PU adhesive is only workable for 90 seconds after application and achieves full strength 90 minutes later – a tenfold acceleration over conventional times. The total bonding length per i3 monocoque is 173 metres.

BMW claims that it is able to output 70 vehicles a day using this process­ – still a relatively small number in comparison with cars produced using more conventional materials.

Class-A CFRP body panels
While processes for the high-volume production of CFRP structural components are in their infancy, methods for the incorporation of the material into other components are more advanced. For example, Gurit supplies CFRP components to Aston Martin and Ferrari, and claims that its Sprint Car Body Sheet (CBS) makes the production of class-A CFRP body panels economically viable in volumes of up to 40,000 per year from a single tool set.

Manufacturers are also starting to employ CFRPs in more unusual applications. For example, Carbo Tech has started to produce wheels from a combination of CFRP (for the outer rim) and aluminium (for the centre star). The company is able to manufacture up to 20,000 of these wheels a year using a fully automated RTM process, and they will debut on a number of 2016 models from German carmakers.