Given the continued increase in global production, vehicle-makers have had to take action on waste management 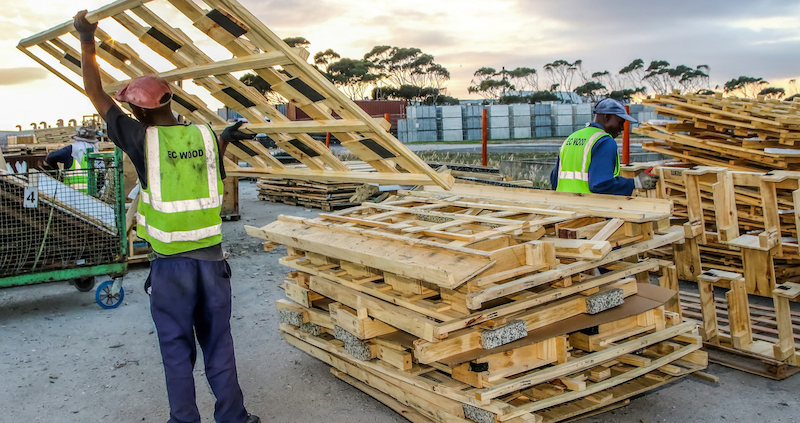 Waste management in automotive manufacturing has moved beyond the simple recycling of materials toward a concept known as ‘the circular economy’. This is where materials that may previously have either been scrapped or recycled are given a second life, and another use is found for them.

General Motors is one champion of this approach to waste. “We now have more than 150 landfill-free facilities around the world and we recycle almost 40m garbage bags of products each year,” says John Bradburn, GM’s global manager of waste reduction. “We even met our 2020 goal in terms of zero landfill at the end of 2016. However, we are now really focused on the circular economy – how we take our materials and put them back into our own products through reuse, as well as how we can impact other sustainability factors such as people in need, our habitat, wildlife, the coast and the communities we live in.”

GM has taken the cardboard used in its plants and put it back into sound-dampening material in its Buick Verano vehicles through a process known as upcycling. In other ‘circular economy’ initiatives, the plastic caps and shipping aids from the company’s site in Fort Wayne, Indiana, are mixed with other materials to make radiator shrouds for the Chevrolet Silverado and GMC Sierra. In addition, GM shreds test tires from its Milford Proving Ground, Michigan, and incorporates them into the manufacturing process for air and water baffles in its cars.

The company also uses water bottles in interesting ways as part of a project called ‘Do Your Part’. “As there is a problem with the water quality in Flint, Michigan, the community uses a lot of bottled water,” explains Bradburn. “The problem is, what do we do with those water bottles when they have been used?” He says the company set up a circular project to reuse the water bottles from its plants and Flint itself to reduce waste and to help the community.

“We turn these bottles into air filters, which we use in our plants, and also use them as the lining for coats for the homeless people in Michigan. These coats also turn into sleeping bags. We also use them to reduce the fabric insulation that covers the engine of our Chevrolet Equinox vehicle.”

Spanish carmaker Seat also plays an active role in the circular economy, by trying to reduce the amount of materials that are considered as waste. “Seat’s main challenge is to achieve a clean production, with minimised residue generation and recovering or recycling any waste generated, meaning it is not considered waste as such,” says Gregorio Escalante, plant engineering manager at Seat.

Meanwhile, Toyota North America – like GM – aims to eliminate waste and one day reuse and recycle all materials. The company has already made some progresss, in 2015 reducing, reusing or recycling 96% of non-regulated waste.

Contributing to the communityWaste management by manufacturing operations can make a big contribution to local communities by reusing or recycling their waste too. In addition to its Flint water bottle initiative, GM runs a programme that is designed to help cleanse the Mississippi river, which has a problem with plastics pollution.

John Bradburn with a Chevrolet Equinox engine cover made from plastic bottles
“With our waste management programme, we work with both companies and non-profits,” says Bradburn. “For example, we collaborated with Living Lands and Waters environmental conversation organisation, whose mission is to clean, preserve and restore the Mississippi. We processed two trucks of tyres, which had been washed ashore or were at the bottom of the river, by power washing and grinding them. We then sent these to one of our suppliers in Indiana who will use them in the manufacturing of vehicle parts.”

Subaru of America is also lending its expertise to help the natural habitat in the US by piloting zero-landfill initiatives at three national parks in the country: Yosemite, Grand Teton and Denali. The company, which claims the honour of establishing the first zero-landfill site in America, sent its sustainability experts to each of the pilot parks to do an assessment of their current practices and discuss initiatives that could help them to reach the ultimate aim of becoming zero-landfill. In partnership with the National Parks Conservation Association, Subaru wants to create a series of best practices which can then be scaled to other national parks in the US.

Creating homes for animalsToyota, meanwhile, is working to increase collaboration in waste management between key organisations, both public and private. The carmaker has partnered with the Wildlife Habitat Council to help with the preservation of animals’ natural habitats. For example, Toyota Motor Manufacturing in West Virginia started the construction of bat houses so that it could install them around its powertrain facility there.

Chevrolet also makes shelters for bats, ducks and owls from discarded cases of its Chevy Volt vehicles, which it has installed around its facilities globally. The aim is to maintain appropriate levels of the species, which provide ecological balance in the environment. “We have around 900 of these around the world,” says Bradburn. “We’re very proud of this achievement, as it’s the first time in China’s history that an artificial nest has been used to house wildlife.”

Waste management in product designIf the circular economy is truly to work in automotive waste management, then designers need to keep in mind how a product can be reused in a different way at the end of its normal lifespan, and choose materials according to the principle of creating less waste.

“We need to look at materials today not as just what they are initially being used for, but also what they can become – and that needs to start in the product design phase,” Bradburn states. “At the end of the life of a part or product, does it need to be recycled, shredded or melted, or can it be repurposed and made into something else, much like what we did with the water bottles in Flint, Michigan?” He says this way of thinking “needs to be embedded into every part of automotive manufacturing, from beginning to end”.

"We need to look at materials today not as just what they are initially being used for, but also what they can become..." - John Bradburn, General Motors

One interesting possibility, Bradburn believes, would be for US manufacturers to combine the high level of knowledge and technology found in developed countries with the ingenuity shown by developing countries.

“In developed areas, such as the US and Europe, there are significant amounts of technology and infrastructure that we can leverage for waste management, but there is also a reluctance to think beyond that which exists today,” he continues. “Great innovations have generally come about due to needs or challenges in societies, and in developing countries I’ve seen amazing work due to the need to expand horizons because the means to reuse or recycle haven’t been created yet. For example, when commodities in some such countries aren’t seen to be recyclable, then these automakers are finding ways around that by using them in other ways.” 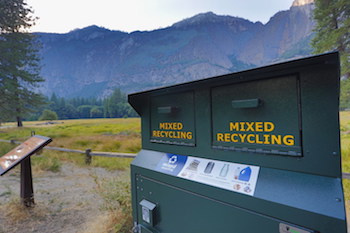 From supply chain to supply webIn the same way that it is important to implement sustainability along the whole supply chain, it is also important for waste management to be part of suppliers’ philosophies and practices.

“We have developed a supply web – not a supply chain – where we share waste management best practices and give advice,” says Bradburn. “This is especially key in developing countries where they don’t necessarily have the facilities to recycle all materials. We call it a web because it has many more connections and is very strong, so if one of those pieces breaks then the others continue. This also extends out to the community. What we think about is how a company like General Motors can show others how to embrace the circular economy and integrate it in their community.”

It is also important for the employees of automotive manufacturers to fully engage with the circular economy concept and follow appropriate practices in their daily work.

“To achieve this, a leading role is played by applying cutting-edge techniques in the processes to avoid waste generation, but it is as important to raise our workforce’s awareness and participation to achieve this goal,” adds Seat’s Gregorio Escalante.

At Toyota, team members are taking the initiative when it comes to waste management. In Indiana, its plant reduced waste by more than 22,000lbs (10,000kg) after workers spotted that a lot of raw material remained in a drum that was said to be empty. To prevent this from happening again and ensure that the material did not end up as waste, employees set a standard point for when the drum was “empty” and then managed to lower this point while maintaining quality.

“For example, if we recycle materials used in manufacturing, then that would be enough to achieve our landfill-free goal, but SMM would say that we can do better than zero landfill. It would say, ‘let’s take that material and make something like a wildlife habitat nest structure for endangered species’.

“This is how the circular economy works. Sustainability materials management looks at the community’s needs as a whole – not just individuals, but all living species. What is significant about this work is that we include young engineers, school children, and anybody who has an interest, as waste management is all about working together and working outside our business to help others.” 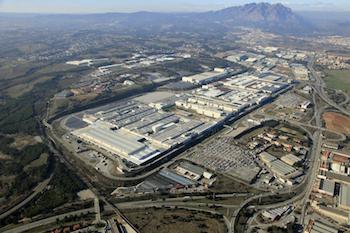 Seat Martorell has contributed to an impressive reduction in waste across the company’s operations. Waste was cut by 41.6% last year

In 2016, Seat reduced waste at its Martorell, Barcelona and Seat Componentes factories in Spain by 41.6%. One of the key measures carried out for the reduction at source of the disposed waste was to replace the spray guns on the paintshop robots.“The new equipment is highly efficient and achieves an optimum transfer of paint to the car bodies, and as a result, significantly reduces paint residues,” explains Gregorio Escalante, plant engineering manager at Seat.

Other measures implemented across the plants included increasing the number of containers and waste stations on the production line.“These enable a thorough classification of waste, and therefore allow for more detailed assessment, either as recyclable, or in the case of residues that are difficult to recycle, as usable for fuel in other industries,” says Escalante. “We have also carried out an environmental awareness plan aimed at our workforce, which has led us to provide information stands in the production shops to promote good environmental practices.”

This year, the waste management strategies being implemented include the reduction at source of production-related logistics packaging to minimise its generation. Escalante explains: “We are also planning to replace the Ecogun spray guns with Ecobell 2 guns in the paint booths in the paintshop in order to continue improving the transfer of paint to the car bodies to further reduce waste. At the same time, we are working to optimise the separation of general waste to encourage its reuse.”