Fresnel-Collectors in particular are especially appropriate for the generation of process heat due to their high surface efficiency, suitability of installation on flat roofs and low running costs. 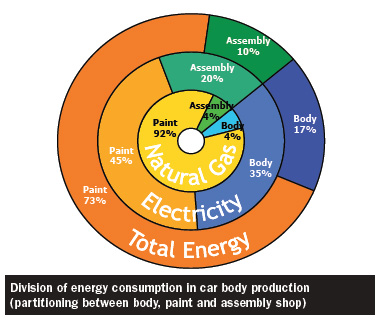 Ovens the key to major energy savings
The automotive industry is under considerable strain to make their products more environmentally sound. Not only the cars themselves, but the whole value chain has to become more sustainable. One production process, which contributes a significant share to the carbon footprint of a car, is the curing of a car’s paint. The convection ovens for the curing of the paint on the car’s body are operated at temperatures up to 200°C, typically generated by gas burners.

Dürr, as a leading supplier of production technology for automotive industry. is addressing the need for more sustainable automobile production with its Eco+Paintshop, which reduces the demand for energy and materials as well as emissions.

To try to cover the remaining process heat demand of the paintshop with renewable energies, Dürr has teamed up with Industrial Solar, a leading manufacturer of a linear concentrating Fresnel process heat collector, which is capable of generating temperatures up to 400°C in the industrial power range.

Analysing paintshop energy consumption
In automotive car body production, painting is at the top of the list of energy consumers with an average energy 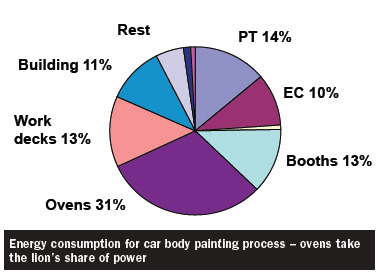 consumption of 700–900kWh per car body, and thus has a significant impact on the balance sheet value. The emissions created during the entire manufacturing process of an automobile correspond to a distance driven of 40,000 km. At the same time, due to its great complexity the painting process offers many approaches to improve the use of energy, materials and space, as well as to reduce emissions. Dürr has analyzed and optimized these potentials and to this point has reduced its use of energy in the paint booth by over 60 % with the EcoDryScrubber, one of the major installations in the Eco+Paintshop. To further reduce primary energy consumption Dürr was seeking to minimize the second largest energy consumers, the ovens. To integrate renewable heat sources like solar energy was chosen to be the next step towards more sustainability. 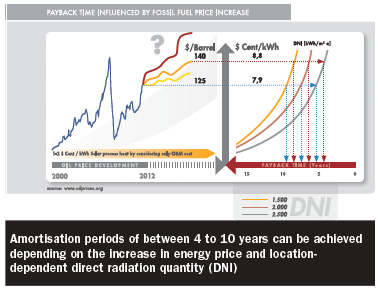 Pilot installation at Dürr
In February 2012 a pilot system of a solar driven convection oven was installed on the Dürr company site in Bietigheim- Bissingen near Stuttgart, Germany. The commissioning took place in April 2012. An Industrial Solar Fresnel collector consisting of six modules with a total aperture area of 132m² is used to heat pressurized water to an outlet temperature of 180°C. A fossil fired backup boiler complements the solar thermal system to meet the thermal power demand of the convection oven. Finally the heat is dissipated in the convection oven via a secondary pressurized water – air heat exchanger.

By the use of mirrors, Fresnel collectors concentrate sunlight on to an absorbing tube and generate thermal energy within the range of 100 °C to 400 °C. The collector system can be used over a wide power range using modular techniques. It can be flexibly integrated into existing steam networks.

In order to use thermal solar energy, sufficient surface area is necessary to expose the collector to the sun. For industrial 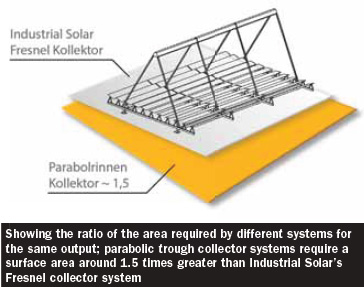 plants, it is often the case that more energy is required than the amount of solar radiation energy that can be obtained from the available roof area. Solar thermal energy and especially Fresnel collector installations are favored because, by comparison, a higher level of usable surface area is obtained.

As an example, for a maximum output of about 10MW, an area of approximately 20,000m² is required, whereas a parabolic trough collector requires approximately 1.5 times more area.

Efficiency and amortisation
Long-term investments, such as those for buildings or energy systems, have a very low risk profile. Simultaneously, and over a long period of time, they can save money or rather generate it.

In order to obtain a meaningful evaluation of such an investment it is also necessary to consider them over a long time period. Usually, the internal rate of return (IRR) is used as a criterion for assessing the economic viability of an investment. For a typical process heat system with Fresnel collectors from Industrial Solar, an IRR of between 5% and 30% can be achieved according to the current energy price, the predicted rate of inflation for energy and the lifespan of the system.

The amortisation period lies between 4 and 10 years. After that, the plant has very low operating costs and, depending on the size of the plant, the price for solar heat is below US$0.008/kWh. The deciding factor for investing in an energy saving system is frequently the amortisation period. In industry, amortisation periods of between 3-5 years are expected. If the rate of return instead of the amortisation period is taken as the basis for a decision to make an investment, a solar thermal system generally performs better, due to its long lifespan of 20+ years as opposed to the results seen from a quick glance at the amortisation period. Industrial companies usually opt for investments that relate to their core business and they are often wary of tying up capital over several years in peripheral investments. “Contracting” is an obvious solution in this case. This provides investors with safe and profitable investment opportunities and enables the company to obtain process heat for a low price from the beginning when the solar plant is operational.

The prices for conventional energy sources that are replaced by solar energy are important for economic efficiency. Depending on the location, fossil fuels may be heavily subsidized by government and retail prices sometimes are even below their extraction and processing costs. In areas where fossil fuels are less subsidized, solar energy can be utilized to provide an even higher financial benefit. 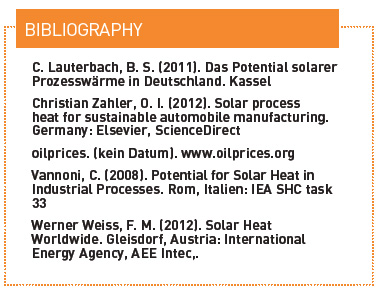 technology from Industrial Solar due to the temperature levels involved and the possibility of generating steam directly.

Even when there is limited space available, these collectors can still be used because of their high surface area efficiency. Through their low wind resistance and light weight, they can be installed on both the ground and also on roofs without any special considerations. The long lifespan of the individual components and simple integration into existing systems enable low operating costs to be achieved and make these solar process heat systems economically feasible.