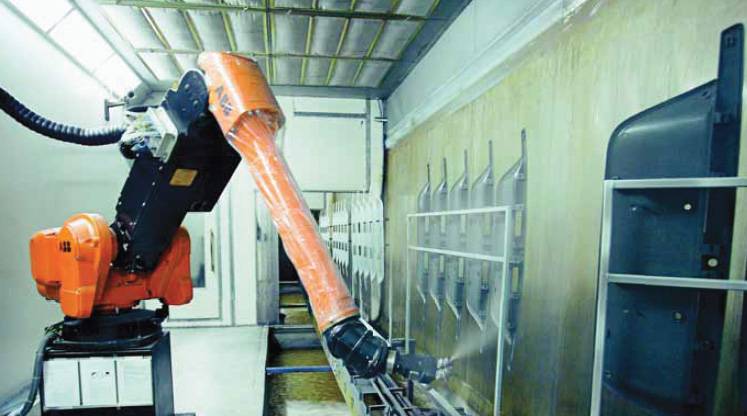 When GM Holden called for a coating suitable for application over interior components without the need to prime or flame treat the surface, an Australian supplier responded.

The Australian OEM market is home to manufacturing facilities owned by Toyota, GM Holden and Ford, supported by vibrant Tier 1 and 2 local suppliers who manufacture a combined annual volume of about 220,000 vehicles. The vehicles are designed from ‘ground-up’, catering to the Australian consumer with distinct brand loyalties divided into groups of: Ford, Holden and Toyota supporters. When the small size of the market place, distance, demand for better technologies and stricter guidelines combine with the implementation of tough new specifications, the resulting adversity creates new opportunities for aggressive and inventive developers of new technologies. 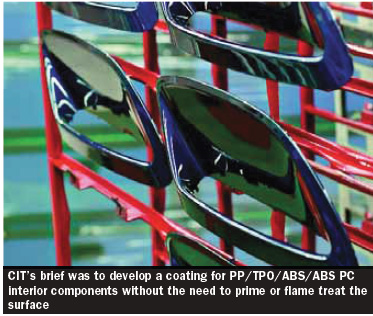 With the release in 2008 of GMW14867, the latest global engineering standard by General Motors, we recognized our opportunity to design new coatings that meet the requirements of GMW14867, specifically the resistance to chemical attack such as sun tan lotion and insect repellents. Having worked very closely with GM Holden in Australia, we were able to take a leading role in supplying GM Holden with the new generation of interior coatings tested and approved to GMW14867. CIT is listed on MATSPC as an approved global supplier since 2011.

We have a proven track-record in supplying a variety of different 1K and 2K OEM systems, with our 061 Sigma Color System meeting both the latest GMW14867 specifications and world leading technology as a 2K primerless coating system over PP/TPO interior components. The 061 Sigma system was used in both local and export production of the Toyota Australia ‘Aurion’ series launched in 2008. The development of the 061 Sigma Series was ‘fast-tracked’, when one of our customers was facing the loss of a major paint contract due to production facility restrictions. The restrictions were in lack of operating space and restraint on capital expenditures.

Our customers brief was: “Can you develop a coating suitable for application over PP/TPO/ABS/ABS PC interior components without the need to prime or flame treat the surface, without jeopardizing adhesion and all other performance requirements?”

Our industrial chemist, Jim Mitchell (Director of R&D), worked tirelessly over several months and managed to complete the Sigma System he designed and developed, meeting all the specifications as stipulated by Toyota Australia in time for the launch of the new vehicle build project in 2008. General Motors US became aware of our Sigma System and subsequently encouraged us to proceed with the tough process of performance testing to meet all the requirements for the new global standards. Global GM approval was granted to CIT on March 1, 2011 for our Gamma Base and Sigma Colour systems. The availability of a coating system suitable for primer-less application over PP/TPO would provide major cost savings in both material as well as process costs for OEM components, while at the same time reducing the environmental impact (with improved recycling possibilities). 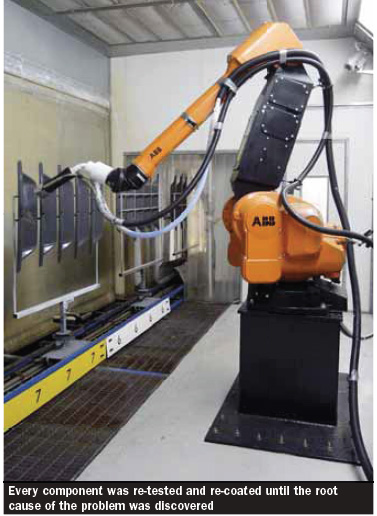 Participating in the latest major GM Holden program launch MY14 Commodore and Cruze, the dashboard and other interior components called for a soft feel coating system, meeting the requirements of GMW14867.

CIT was invited very late into the program, as preference was given to the original soft feel paint suppliers. Failing to meet the new standards on time with their old system, we were able to demonstrate our 950 New Soft Feel coating system. All the trials and testing for our 950 New Soft Feel system was successfully completed on the provided substrate plaques and pre-production moulded components early September 2012 both for 600R Jet Black and 311N Light Titanium and officially certified on GM MATSPC September 18, 2012.

Unexpected test results with failures on scratch and mar resistance on the first production components being tested in our lab for PPAP submission caused a major panic in our company. Every component re-tested and re-coated in our laboratory failed tests, previously successfully conducted. We soon discovered that the root cause of the problem was the late introduction of a new plastic material, with a ‘very soft’ surface tension, made worse by a new etched grain effect. At a time when our focus should have been on final production colour submissions, PPAP approvals and global raw material procurement, we were ‘forced back to the drawing board’ to ‘fix the impossible’.

The CIT 985 Scratch and Mar Resist Soft Feel was officially listed and certified on MATSPC on January 21, 2013.