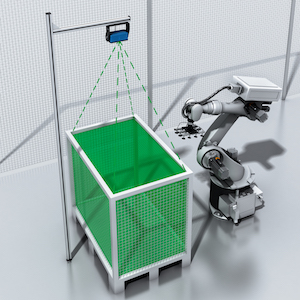 Sick says it has launched a configurable, plug-and-play 3D detection sensor based on its Visionary-T range of industrial 3D imaging cameras. The company says this uses its single-snapshot Time-of–Flight (TOF) technology for a range of detection and collision warning duties.

Featuring on-board processing, the company says this system can be configured for a variety of applications to detect the presence or absence of 3D objects, such as for collision warning on forklifts, Automated Guided Vehicles (AGVs) and Carts (AGCs). It’s claimed sensor will provide 3D image analysis with a simple yes/no, occupied or unoccupied, signal depending on the configuration and can assess the availability of a workstation or cell on a production line where a large object, such as a vehicle or other machinery assembly, is to be moved for the next phase and warn of any intrusions.