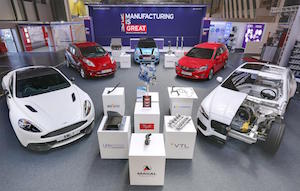 UK – The figure, equivalent to $325.3m, was revealed after research by ComRes, which surveyed 112 supply chain companies within the Society of Motor Manufacturers and Traders (SMMT). The proportion planning to invest in their businesses over the next three years stood at 94%.

Of the companies planning to invest, 79% intend to invest in plant, machinery or tooling; 73% in skills and apprentices; and 66% in new product development. The proportion expecting to expand their workforce was 68%. The SMMT noted that 78,000 people are currently employed in the UK automotive industry and that potential investment “does depend, however, on continued political and economical stability”. The UK is holding a referendum on June 23 to decide whether to continue its membership of the EU.

Describing the national supply chain as “a critical element of the wider UK automotive industry”, consisting of 2,000 companies, the SMMT pointed out that the sector has “suffered significant setbacks in past decades but is now undergoing a renaissance”. Citing a report by the Automotive Council in 2015, the SMMT noted that 41% of the components in an average British-built car are now sourced locally, up from 36% in 2011. The Automotive Council also placed a value of £6 billion on new business opportunities in the UK automotive supply chain. Of the suppliers in the ComRes survey which are planning to invest, 77% said they will pursue new contracts with British clients. Increasing the volume of business with UK-based OEMs and major suppliers was considered important by 93%.

Concerns expressed by those surveyed included: a shortage of skilled workers (41%); exchange rate inconsistencies (62%); overseas competition (58%); a lack of visibility among purchasers (31%); fluctuations in the price of materials (33%); energy costs (25%); and difficulty securing funding or finance (21%).

“Britain’s car industry is booming, exporting more than ever, and it’s encouraging to see this opening up huge opportunities for the UK supply sector,” said Mike Hawes, CEO of the SMMT. “Many of the UK’s competitors have far larger and stronger supply sectors, however, so continued government collaboration through organisations such as the Automotive Council will be critical as we strive to re-shore more supply chain work.”