The application of smartphones and tablets as tools now offers great opportunities for the automotive industry.

Since the 1970s, industrial robots have come with a hand-held operating device called a teach-pendant. These units are now obsolete in the eyes of the new generation of robot users that are increasingly making up a large percentage of the industrial work-force.

This webinar provided an insight into the next-generation devices that will be used to programme, commission, operate and supervise industrial robots in the near future

To view this webinar on an iPhone, iPad or iPod please download the free GoToMeeting.

This webinar was presented by: 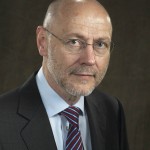 Bertil Thorvaldsson is the Global Product Manager for Software Products in the Robotics Business Unit of ABB. He first joined ABB in 1976 as a software developer working on the world’s first microprocessor -controlled robot, and has since held several managerial positions in R&D, Marketing, and Service in Sweden, Germany and the US. He holds a Masters degrees in Electrical Engineering and in Business Administration.