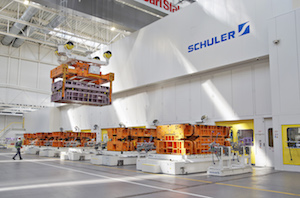 Czech Republic – The servo-mechanical line, installed in a new, 11,600 sq.m hall at a total cost of 86.4m ($94.8m), began full production in March after successfully completing a trial period in February. PXL II can make up to 23,000 parts per day for multiple models, and Skoda says this is the first time it has had the capability to make large aluminium components, though the press is currently handling steel.

According to Michael Oeljeklaus, Skoda’s board member for Production and Logistics, the new press “enables a particularly flexible production process and significantly shorter changeover times”. The changeover is fully automated and takes only four minutes, in comparison with previous generations of presses which required 20 minutes or more.

Oeljeklaus described the press as being “one of the most modern of its kind in Central Europe” and “another important part of our ‘GreenFuture’ environmental strategy, which focuses on resource-saving and production as well as energy-efficient vehicles”. The press is claimed to be about 15% more energy efficient than a conventional mechanical press due to its servo technology.

The energy needed to produce parts is generated in 14 decentralised servomotors rather than a flywheel and can be easily regulated as required. Furthermore, the energy released during pressing can be partially recovered and the line is protected from temporary power outages due to its recuperation system, ensuring that production is continuous.

Skoda has recruited an extra 140 personnel to bring the press shop workforce up to around 1,000 and operate 12-hour shifts seven days a week.