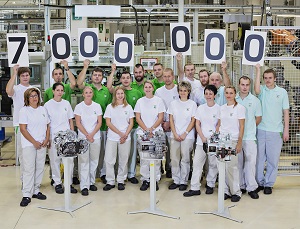 Czech Republic – The total produced so far includes 6m MQ 200 units and 1m of the MQ 100 variety. The two transmissions are used in Skoda and other Volkswagen Group vehicles.

“Producing 7m manual transmissions proves the competitiveness of our component manufacturing in Mladá Boleslav,” commented Michael Oeljeklaus, Skoda’s board member for Production. Referring to the gearboxes made at Mladá Boleslav and the DSG transmissions at Vrchlabí, he added: “Over the coming years, we are going to further strengthen Skoda’s powertrain production.”

The MQ 200 gearbox has been coming off the production lines at Mladá Boleslav since 2000 and the current rate is around 1,200 units per day. The gearbox is installed in 1.0-litre to 1.6-litre petrol vehicles made by Skoda, VW, Audi and Seat. The MQ 100 was introduced in 2011 for the VW Group’s new small-family series, including the Skoda Citigo, VW up! And Seat Mii. It has since been used for the Skoda Fabia and other VW Group cars with 1.0-litre petrol engines. The daily MQ 100 production capacity is around 1,400 units.

At Vrchlabí, Skoda assembles the modern direct gearbox DQ 200, with the cumulative total having reached 960,000 units. The VW Group has invested €210m ($228.2m) at the site since the start of production in 2012 and there are plans for further expansion; the daily output will increase to 2,000 units per day by March 2016.