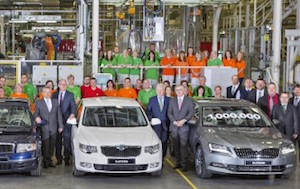 Czech Republic – The milestone vehicle, made at Kvasiny, was a top-of-the-range saloon with a Laurent and Klement badge. It was also the 250,000 third-generation Superb produced since the market launch in March 2015.

Michael Oeljeklaus, the OEM’s board member for Production and Logistics, described the milestone as “an impressive demonstration of Skoda’s high production competence”.

In addition to Kvasiny, Skoda operates the Mladá Boleslav factory which has been producing large cars since the early 20th century; in 1907 the Laurin and Klement FF became the first eight-cylinder model in Central Europe.