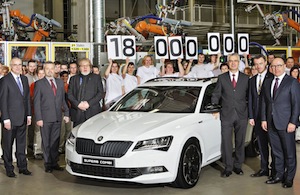 Czech Republic – The milestone vehicle, a Superb Estate, rolled off the line at the Kvasiny plant – just over 100 years since the OEM began production. Skoda’s output has been on the increase, and in 2014 it produced 1m units in a single year for the first time.

“Over the last five years, we have significantly increased the number of high-quality vehicles produced worldwide,” commented Michael Oeljeklaus, board member for Production. “The Skoda plants in the Czech Republic have made a significant contribution to this. This is the heart of our international production network.”

Since 1991, Skoda has spent 300 billion crowns ($12 billion) on modernising and expanding its facilities in the Czech Republic. Kvasiny is currently undergoing an extensive update which will see its capacity increase to 280,000 units per year, requiring an additional 1,300 personnel; last year, the plant and its 4,500-strong workforce produced 150,000 cars. Kvasiny currently makes the Skoda Yeti, the Superb and Superb Estate, but SUVs will be added in future.