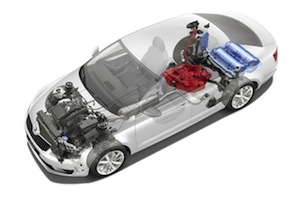 Czech Republic – The company’s main facility has been extensively modernised and expanded over the past three years, with the addition of a new bodyshop, a fully automated paintshop and a press line. The capacity of production Line 1 has increased from 800 to 1,200 vehicles per day; the 11millionth unit was produced on March 19.

Mladá Boleslav currently makes six models: the Octavia, Octavia Combi, Fabia, Fabia Combi, Rapid and Rapid Spaceback. Michael Oeljeklaus, Skoda board member for Production, described the plant as “the heart of the global Skoda production network”. He added that more than half of all Skoda cars built to date have come from the production lines at Mladá Boleslav, 1m in the past two years.

The carmaker regards Mladá Boleslav as the mainstay of production in the model campaign it launched three years ago, with almost 10,000 personnel working on manufacturing the current Fabia, the new Octavia, the new Rapid and the new Rapid Spaceback.

In the Czech Republic, Skoda also has plants in Kvasiny and Vrchlabí, but the carmaker is aiming to increase its local capacity in key global markets. It has established a partnership with Shanghai Volkswagen (SVW) in Anting, Yizheng and Ningbo in China.