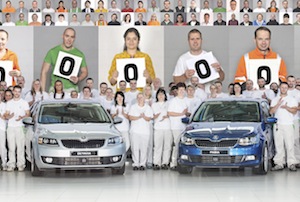 Czech Republic – The milestone car, a Skoda Rapid Spaceback, came off the production line at the company’s headquarters in Mladá Boleslav. Production of the 17 millionth vehicle highlights the success of the carmaker’s growth strategy; in 2014, Skoda manufactured and sold more than 1m cars for the first time in a single year during its 120-year history. The OEM plans to increase sales to 1.5m per annum.

"Since 1991, when Skoda joined forces with Volkswagen, we have manufactured more than 12m cars," commented Winfried Vahland, the vehicle-maker's CEO. "Now, we can definitely say we are established in the 'Champions League’ of international volume manufacturers."

Skoda’s global production network has expanded significantly over recent years and its vehicles are now made at 13 locations across the Czech Republic, China, Russia, India, Slovakia, Kazakhstan and Ukraine. Over the coming years, the Czech carmaker plans to increase its production capacity still further.

“We are not going to become complacent; we are picking up the pace," added Vahland.