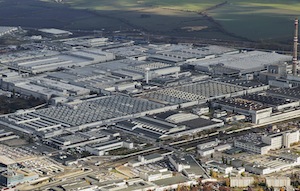 Czech Republic – The cumulative production total at the OEM’s main plant, which has been operating since 1905, was reached this month. Mladá Boleslav is currently undergoing a modernisation and expansion programme which will see its capacity increase still further.

The factory currently makes six Skoda models: the Octavia, the Octavia Combi (estate), the Fabia, the Fabia Combi (estate), the Rapid and the Rapid Spaceback. It was significantly modernised for the 2012 production launch of the Octavia/Octavia Combi, Rapid/Rapid Spaceback and Fabia/Fabia Combi models, when the capacity of Production Line I increased from 800 to 1,200 vehicles per day; a new bodyshop and fully automated paintshop were also added. A new press line commenced operations in 2013, and another will be installed by 2017 at a cost of €86m ($91.2m).

An earlier redevelopment occurred when Skoda became part of the Volkswagen Group in 1991. Since then, the plant has produced 7.8m vehicles: almost 3.3m Fabias, around 2.8m Octavias and over 309,000 Rapids.

Michael Oeljeklaus, production director at Skoda, said that the 12m milestone is “evidence of the strength and significance of the site”. Worldwide, over half the Skoda vehicles on the roads today were made at Mladá Boleslav.