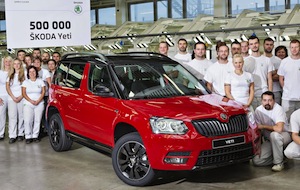 Czech Republic – The milestone vehicle, a Yeti Monte Carlo, rolled off the line six years after the model was launched as Skoda’s first SUV. The Yeti was redesigned in 2013 to create versions for urban and country driving, both available in front- and all-wheel drive. The sporty Monte Carlo version was introduced in 2014.

The Yeti is manufactured at Kvasiny but also in China and Russia, at Shanghai Volkswagen and GAZ Nizny Novgorod respectively. In China, it is produced as an extended version for the local market.

Skoda’s Kvasiny plant is currently undergoing an extensive modernisation programme costing 7 billion crowns ($285.1m) which will see its capacity rise by up to 280,000 vehicles per year, and its workforce by 1,300 – in comparison with 166,200 Skoda vehicles produced in 2014 by 4,500 employees.

Michael Oeljeklaus, Skoda board member for Production and Logistics, commented: “Over the next few years, Kvasiny’s production volume will increase significantly. SUV production is going to play an important role in this.”