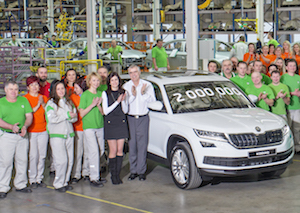 Czech Republic – The milestone car was a Kodiaq, the brand’s first large SUV. For the launch of this model, the factory recruited an extra 2,600 personnel by the end of 2016 and is still progressing with a modernisation and expansion programme.

Skoda has invested 7 billion crowns ($269.4m) at Kvasiny as part of its SUV campaign. The plant will increase its capacity to 280,000 vehicles per year and take on yet more workers.

According to Michael Oeljeklaus, Skoda’s board member for Production and Logistics, Kvasiny will become a competence centre for SUVs as well as “making a key contribution” to Skoda’s plan of action, Strategy 2025.

The Kvasiny plant has been producing vehicles for more than 80 years, beginning with the Jawa and introducing its first Skoda model, the Superb, in 1947. The factory made its 500,000th Yeti in October 2015.