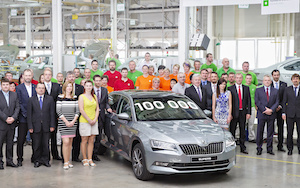 Czech Republic – The milestone, third-generation vehicle rolled off the assembly line slightly over one year after production began. Since 2001, more than 850,000 Superb models have been manufactured in total.

The first generation Superb, based on a classic notchback saloon, was made from 2001 to 2008. The second generation was launched in 2008 and an estate version became available in 2009. The third generation has been made since June 2015.

Skoda Kvasiny, one of the company’s three manufacturing sites in the Czech Republic, received substantial investment in production technology, assembly and logistics areas for the introduction of the latest Superb. A total of 1.7 billion crowns ($71.5m) were spent on the bodyshop alone.

The Kvasiny plant is currently being prepared for an SUV programme and will receive 7.2 billion crowns of investment by 2018. Production capacity will rise to 280,000 vehicles per year and the workforce will increase by 2,000 from the current 5,000.