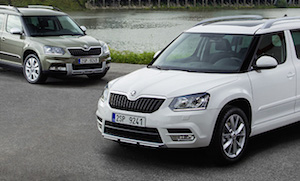 Russia – The OEM said it will use additional production capacities at the Nizhny Novgorod site that it shares with Volkswagen Group Russia and the Gaz Group. Since the 2009 launch, Skoda has already delivered more than 580,000 Yetis worldwide, including 99,500 last year, and demand is currently high in Europe.

The vehicle-maker has offered two versions of the compact SUV since 2013: the Skoda Yeti for urban driving and the Skoda Yeti Outdoor for rough terrain. Five more powerful engines types were added in 2015, compliant with EU-6 and reducing fuel consumption and CO2 by up to 20%. The Yeti is currently made at five plants: Kvasiny, Czech Republic; Solomonovo, Ukraine; Nizhny Novgorod, Russia; Öskemen / Ust Kamenogorsk, Kazakhstan; and Anting, China. It has been produced at Nizhny Novgorod since 2012, alongside the Octavia.

Skoda reports Yeti sales of 61,700 to August this year. The OEM has recently launched an SUV campaign, introducing the new Kodiaq, but the Yeti was its first vehicle of this type.