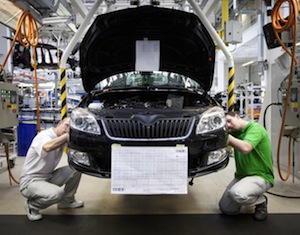 Czech Republic – The plant opened in 1934 and has been part of Skoda since 1947, when the Superb started rolling off the line; it now produces three models with a workforce of 4,200. The factory has turned out more than 1.5m units to date.

Skoda Kvasiny currently makes the Superb, Yeti and Roomster, and will soon add another model. The OEM says it will be “extensively modernising and expanding” the site over the next few years in partnership with the Volkswagen Group.

Paying tribute to the “East-Bohemian industrial tradition” which he said underlies the success of the plant, Skoda’s head of Production, Michael Oeljeklaus, said Kvasiny was “a cornerstone” of the OEM’s international production network and would play a key part in its growth strategy.

“Over the coming years, the site’s annual production volume will continue to increase,” Oeljeklaus stated. “In order to achieve this growth, we will be investing heavily in the Kvasiny site, making Kvasiny a centre of excellence in the production of SUV vehicles, among other things.”

A planned upgrade will include a new bodyshop, the expansion of the assembly and logistics areas and the renovation of the plant’s infrastructure.