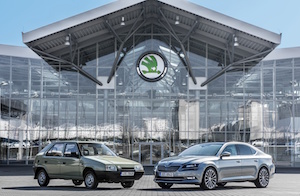 Czech Republic – The start of the partnership in April 1991 set Skoda on course for its transformation from a regional maker to an internationally recognised brand. Currently, the OEM is expanding its manufacturing operations in the Republic.

“What began as a one-series producer with annual sales of 170,000 in the early ‘90s has since evolved into an internationally competitive car company with six model lines and over 40 versions,” commented Bernhard Maier, Skoda’s CEO. “Nowadays, Skoda produces over 1m cars per year at 14 production sites on two continents, selling products in over 100 markets.”

Skoda was established in 1985 with headquarters at Mladá Boleslav, still its main location. After the initial agreement in 1991, the VW Group gradually increased its share of the brand and became the sole owner in May 2000. Between 1991 and 2016, over 300 billion crowns ($12.7 billion) were invested in new models, R&D and production capacity.

Today, Skoda’s production network includes its Czech plants at Mladá Boleslav, Kvsiny and Vrchlabí plus locations in Ukraine and Kazakhstan. Through the VW Group, it also has affiliations in Russia, Slovakia, China and India. The company now employs around 28,500 individuals.