Every major OEM has laid out bold sustainability targets, but how much concrete progress has been made? 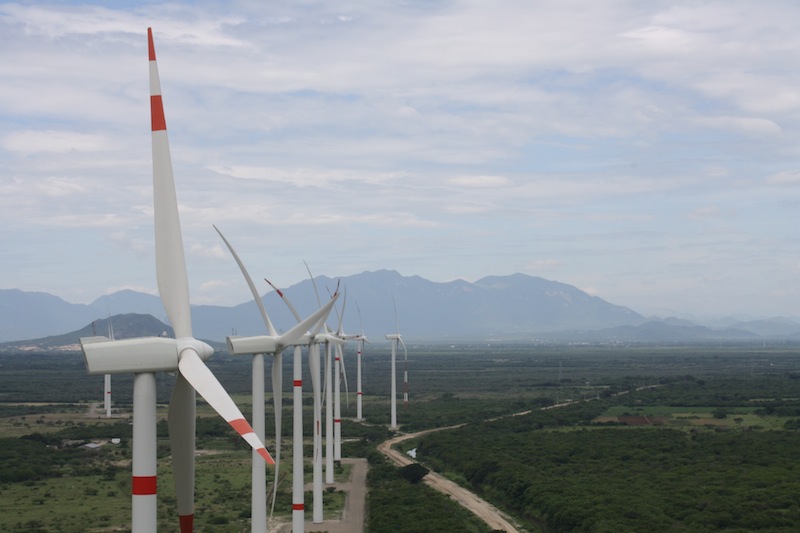 Automotive manufacturers have set themselves some ambitious targets regarding their use of renewable energy and how it will affect their emissions output. Honda is aiming to reduce CO2 emissions by 30% globally between 2000 and 2020. By the same date, Jaguar Land Rover intends to reduce CO2 and water use by 30%, as well as decreasing its dependency on fossil fuels. The British carmaker is already on track to achieving this, having reduced the CO2 emissions of its fleet by 23% and cut its operational emissions by 21%. Meanwhile, Daimler is targeting a 20% reduction in CO2 from production by 2015, compared with 2007 figures.

It will be some time before these targets are achieved, but automakers have been implementing a variety of renewable energy technologies worldwide, with considerable success.

Ford
The American OEM has carried out a number of highly successful renewable energy implementations at its plants, including wind, solar and hydropower. The company’s Dagenham Diesel Engine Assembly line in the UK was the first automotive plant in the world to obtain all of its electrical energy needs from two on-site wind turbines, which have been in operation since 2004 and generate 1.8MW each. A third turbine, offering 2MW, was installed in 2011.

Elsewhere in the UK, Ford’s Dunton Technical Centre is also powered by renewable sources. Electricity for the 270-acre site, which is home to a team of around 3,000 engineers, has been purchased from 100% renewable sources since March 2009. The majority of the electricity, supplied by GDF, is sourced from a combination of hydro, wind and waste-to-energy generation, and replaces energy from traditional sources that would have produced an estimated 35,000 metric tons of CO2 per year.

Meanwhile, in the US, Ford announced last November that it had contracted Wind Energy Corporation, a manufacturer of renewable energy systems, to install four wind sails and PV solar arrays at its dealerships. Each system will generate up to 20,000kWh of electricity per annum, which is enough to charge a Ford Fusion Energi car 2,600 times.

“In partnership with DTE Energy, we’re building the state’s largest solar array at our world headquarters in Dearborn, Michigan,” adds John Cangany, manager, sustainability communications at Ford Motor Company. “It is expected to generate 1.13m kWh annually, which is enough to power about 160 homes. Employees will also be able to use 30 charging stations to charge their electric vehicles at work.” He says the cold weather in Michigan has been “the most challenging aspect” but that Ford expects to complete the installation in April.

It is the OEM’s second solar collaboration with DTE. In 2010, Ford installed a 500KW solar photovoltaic panel system at its Michigan Assembly Plant. Energy generated by the system helps to power vehicle production, which includes the Ford Focus, Focus Electric, C-MAX Hybrid and C-MAX Energi vehicles.

“Since 2008, we have been sourcing renewable electricity to cover the full electric-power demand of our manufacturing and engineering facilities at our Cologne Plant in Germany,” adds Cangany. “This includes the electricity needed for the assembly of the Ford Fiesta models at the plant. Through this initiative, we have reduced our carbon dioxide emissions by 190,000 metric tonnes per year.

“In 2012 a one megawatt photovoltaic installation on the roof of the Ford Customer Service Division warehouse in Merkenich was commissioned, contributing further to our renewable energy efforts.”

General Motors
The American vehicle-maker has taken a major step forward in its use of wind energy, with its first such project at its Toluca complex in Mexico. General Motors (GM) signed an agreement with Italian renewable energy company Enel Green Power, which is developing and constructing a vast wind farm in Palo Alto that will also supply the OEM’s other plants in the country, at Silao, San Luis Potosí and Ramos Arizpe. Toluca will receive 34MW, equating to the power from 17 turbines.

Not only is this GM’s first foray into the wind-energy field, Toluca will also become its largest user of renewable energy when the turbines are up and running. Due to come online in 2016, 75% of its energy will power the majority of the plant, which sits on 104 acres. This renewable energy will help GM’s Mexican plants to avoid 40,000 tonnes of CO2 emissions per annum.

The OEM is also stepping up its use of solar energy, having added three acres of new solar arrays at two of its Michigan facilities in mid-2014. GM’s processing centre and engine plant in the state now sport 150kW ground-mounted solar arrays, which generate 400,000kWh of renewable energy per year. GM installed its first solar array in 2006.

Honda
The Japanese OEM has made progress with its use of wind energy in South America. While hydropower is traditionally the renewable energy of choice in Brazil, Honda decided to build wind turbines because constructing dams for hydropower can cause significant environmental damage. The company is the first automotive manufacturer to use wind power in Brazil.

Honda installed nine wind turbines at Xangri-lá, Rio Grande do Sul, in the space of ten months. The turbines, which became operational in November 2014, have a capacity of 27MW and will be able to generate 95,000MWh of energy per year, cutting CO2 emissions by around 2,200 tons per annum. All being well, the company’s Sumaré plant in São Paolo will be entirely powered by wind energy.

In the US, Honda already has a successful track record of using wind power. Wind turbines generate more than 10% of the electricity required by Honda Transmission of America at Russells Point, Ohio – exceeding the initial electricity generation target of 6.3%. They were initially projected to produce upwards of 10,000MWh of electricity per year. The peak monthly generation so far was in April 2014, when the turbines provided 16.26% of the plant’s power requirements. Their installation makes the Russells Point plant the first major automotive facility in the US to receive a substantial amount of its power from on-site wind turbines.

Jaguar Land Rover
Aside from wind power, solar remains the other main source of renewable energy that automotive manufacturers are using to supply their plants. An important example of this is Jaguar Land Rover’s (JLR) solar panel array at its new Engine Manufacturing Centre at Wolverhampton, UK. Operational since 2014, the facility has more than 21,000 photovoltaic panels and a capacity of 5.8MW; it is the UK's largest rooftop solar array. The company forecasts that the solar panels will reduce the plant's CO2 emissions by 2,400 tonnes per annum. 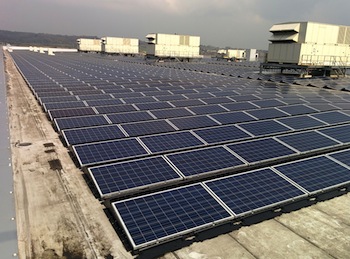 BMW
While most automotive OEMs are focusing on the use of wind, solar and hydropower, BMW is harnessing biogas electricity at its Rosslyn production facility, South Africa. This renewable energy source, involving the combustion of a variety of gases including methane and CO2, was implemented in the first quarter of 2015 in partnership with energy company Bio2Watt. In what is the first commercially viable biogas electricity project in South Africa, BMW estimates that 25-30% of the plant’s energy requirements will be met by renewable sources.

While BMW is exploring innovative renewable energy sources at its plants, solar still plays a major part in its sustainability strategy. In 2014, the company installed one of the UK’s largest roof-mounted solar farms at its Mini plant, Oxford. The 11,500-panel, 260kW solar array covers 20,000 sq. m and was installed by EvoEnergy. The solar farm powers a bodyshop in which more than 1,000 robots are used to build Mini hatchbacks.

Nissan
Like BMW, Nissan is also using biogas to generate electricity, at its automotive plant in Aguascalientes, Mexico. The Japanese OEM claimed to have set a new industry standard when, in 2012, Aguascalientes became the first automotive plant in the world to use electricity from biogas. Renewable energy provider ENER-G supplies the 1,550MW of clean energy from its landfill gas generation project at a nearby site. The results are already striking: a CO2 reduction of 90,000 tonnes per year, equivalent to 17,409 acres of pine forest.

In addition, Aguascalientes receives power from a wind farm in Oaxaca, operated by ENEL. By 2013, nearly half the factory’s energy requirements – 192GWh per annum – were being met by this source of clean power.