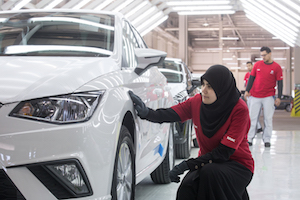 Spain - The Spanish OEM will reportedly start coordinating the strategy of VW Group in the region as it hopes to decentralise its territorial structure and improve efficiency. The news comes soon after SEAT started making the Ibizia in Algeria.

"The VW Group has trusted SEAT with being the lead brand to steer responsibility for North Africa following the successful project initiated last year in Algeria with the assembly plant in Relizane, which is currently operating at full capacity," observed SEAT president Luca de Meo. "Leading the Group strategy in an emerging market such as North Africa is a great responsibility, and we are fully committed to making it happen."

Algeria represents SEAT's fastest growing market in terms of sales. Between January and May this year, the company delivered 10,700 to customers, up from 1,000 in the same period during 2017. The OEM hopes this upwards trajectory will continue with the introduction of the new Leon and Arona to the Algerian market, which is set to take place soon.

The two models are made alongside the Ibizia at SEAT's plant in Martorell, Spain, with final assembly taking place at Relizane for units sold in North Africa. The same procedure is carried out with other models under the VW, Skoda and VW Commercial Vehicle brands. However, SEAT has stated that it wishes to establish a supplier network in Algeria with the hope of carrying out more production processes in the country.