Of the several contenders for world’s toughest car market in 2016, Russia surely takes the prize 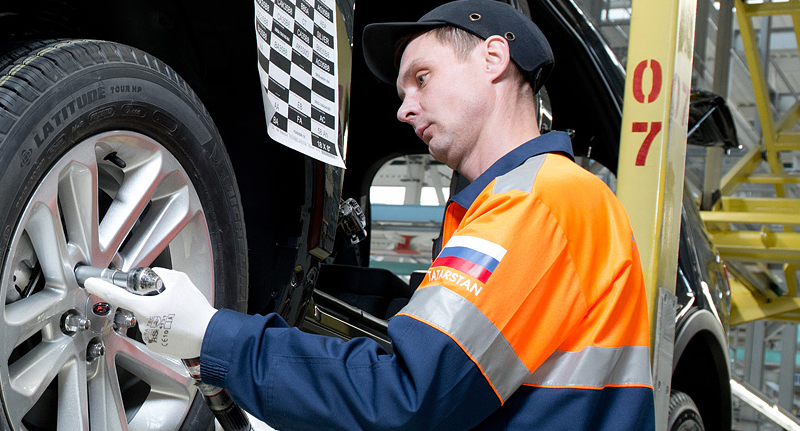 The sinking rouble, western sanctions and collapsing oil prices conspired to pummel consumer purchasing power and confidence in Russia over the last year. Sales have declined by a massive 36%. Back in 2012, when sales hit 2.9m, makers were seduced into expanding investment in the country with the tantalising promise that the market would grow further to eventually overtake Germany and become Europe’s largest. As late as 2014, analysts at the Boston Consulting Group predicted that it could hit 3m in 2016 and 4.4m by 2020.

Instead, demand collapsed. Last year, just 1.6m cars were sold and Nissan’s European chairman, Paul Willcox, believes the market will fall to 1.4m in 2016, taking it below the last disastrous slump in 2009, when sales dropped to 1.5m. At the Geneva Motor Show in March, Renault-Nissan Alliance CEO Carlos Ghosn said: “There is no profitable automaker in Russia”. Willcox expanded on that, saying, “Consumer confidence has completely collapsed and car prices increased 22% in the last 14 months. It’s a downward spiral.”

Most vehicle-makers are grimly holding on, but the collapse was too much for General Motors, which pulled out Opel and most Chevrolet models in March 2015. The company was building the Opel Astra and Chevrolet Cruze models at its St Petersburg factory, as well as farming out production of the smaller Chevrolet Aveo to the Russian CV contract manufacturing GAZ. But media reports suggested that European boss Karl-Thomas Neumann was unwilling to keep pumping in money to fulfil the demands of Decree 166, which gives crucial tax breaks to those companies localising production and supply within Russia. Opel’s St Petersburg plant now stands idle.

The devastation caused by the market collapse has changed the strategies of other makers as well. In March, the German press reported that Mercedes was reconsidering a plan to build a plant in Russia and was looking at Poland instead. Mercedes is comfortably the largest of the German premium makers in Russia and the least affected of the three in last year’s sales bloodbath. However, the report suggest that parent Daimler could not see a clear path to economic recovery in Russia.

A Renault car on the B0 line at Togliatti

Outside suppliers are also wary of upping investment. Localisation is the key to surviving the currency fluctuations, manufacturers say, but it is tough if the suppliers themselves will not commit. One example is British driveline specialist GKN, which delayed a plan to build its first plant in Russia to supply AvtoVAZ’s vast Togliatti factory in the Samara region, 500 miles south-east of Moscow. The plant would have supplied driveshafts and was due to be completed by 2015.

A titanic battle at TogliattiRussia’s automotive woes claimed another victim in March when AvtoVAZ’s majority owners, Renault-Nissan, fired the Russian brand’s first-ever foreign head, Swedish-born Bo Andersson. He had been hired at the end of 2013 to turn around the maker of Ladas on the back of his work with another former Soviet vehicle-maker, GAZ. The two companies had the same problems: overstaffing, a poor reputation among consumers, corruption and underutilisation of outdated facilities.

Andersson arrived at GAZ in 2009 and turned a loss-making operation with debts of $125 billion into a profitable one. Renault-Nissan Alliance chief Carlos Ghosn took notice. “I said to Mr Ghosn that I will do at AvtoVAZ what I did at GAZ,” Andersson said in an interview with AMS last year.

However, Andersson found Togliatti a very different proposition. “It’s ten times more difficult,” he said in the interview. He laid off 20,000 people, which was always going to go down badly in a one-factory town like Togliatti. In addition, the battle he won with the supply base at GAZ proved much tougher at Togliatti. “The supply base is the biggest difference, these are government-owned suppliers and they have been used to having special benefits,” he said.

"There is no profitable automaker in Russia" – Carlos Ghosn,Renault-Nissan Alliance

The suppliers fought back, shutting down production of Togliatti twice as they baulked at Andersson’s demands. “I asked for five things: I wanted quality parts, I wanted delivery, I wanted service, I wanted competitive pricing and I wanted terms of payments,” he said. In response, he said, 15 of them went to President Putin to complain. Andersson won that fight, but the war wasn’t over. He complained that suppliers were selling parts directly to dealers, by-passing AvtoVAZ and Lada, and pocketing the profits. “Normally a company has 10% of revenue in its spare-part business. So If our revenue is €5 billion ($5.7 billion), our spare-part business should be €500m. Today it's €150m,” he said.

Andersson definitely improved productivity at Russia’s largest car plant. He started building cars for Nissan and Renault using the same Renault-Nissan B0 platform and in June last year claimed he had achieved a 70% capacity utilisation for the whole plant, up from 50% when he first started. “The important thing for the Alliance is to benefit from the capacity installed,” he said. The factory produces eight cars for the Alliance on top of the Lada models, including the Renault Sandero, Nissan Sentra, Nissan Tiida, Nissan Almera, Datsun On-do and Datsun Mi-do. In 2013, it was just one. He called AvtoVAZ a contract manufacturing company “and I like that way”.

But despite Andersson’s cost savings, AvtoVAZ was losing money faster than ever. In 2015, losses nearly tripled compared with the previous year to 73.9 billion roubles, ($1 billion). Lada sales last year fell 31% to 269,096 according to figures from the Association of European Businesses (AEB). In the first two months of this year, a Lada model has failed to top the sales leaderboard, with the Granta beaten by the Hyundai Solaris. In February, it was also beaten by the Kia Rio as the Koreans further strengthened their position as the top foreign brands in the market.

Andersson's tough approach turned out to be perhaps too tough for local sensitivities and he has now been replaced by the head of Renault’s Dacia business in Romania, Nicolas Maure. The Frenchman will have to pick his own battles to get AvtoVAZ back into profit.

Investing to localiseAs every remaining vehicle-maker will say, the key to survival in Russia is localisation of parts supply. “If you have your cost structure selling in Russian roubles, you have a huge advantage. If you have just 15% of your cost in roubles versus the euro or dollar, you're dead,” Andersson said last year. He reckoned the amount of parts made locally in Russia for Lada models was running at 81%, with Nissan and Renault cars at around 50%. As of June last year, AvtoVAZ was planning to localise engine supply for the Alliance cars by building a 1.6-litre petrol unit on site.

Alliance partner Nissan believes it has a definite advantage because of its localisation and is working to improve this further. “Because we’ve made the big commitment, we want to maintain the investment,” Nissan’s Paul Willcox told AMS. As well as its low-cost models built at Togliatti, Nissan makes higher-priced cars at its St Petersburg factory, and last year added the Nissan Qashqai SUV. The OEM pulled its last imported model, the Nissan Juke small SUV, from the market last year.

Overall, Nissan’s parts localisation is running at 70%, according to Jerome Olive, the Renault-Nissan Alliance’s head of Manufacturing Engineering and Supply Chain Management. “It’s difficult, but it’s much more difficult for our competitors,” he said. Olive wants to localise tier-two and tier-three suppliers in the country to increase that figure, as well as pushing the connection with AvtoVAZ. “It’s a time to invest for the future. Before the crisis, Russia was the second- or third-biggest market for Renault and the business was very good in terms of profit. It was a huge business. The crisis will finish and I’m sure we will be on the podium again for market share,” he said. 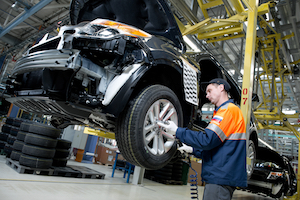 The Explorer is made at Ford Sollers Elabuga

Other makers are also entrenching their position. Ford had a terrible 2015, losing 41% of its sales in 2015 to end up with just 38,607 cars sold. But it has been busy launching new models – five in 2015 – and localising parts production. In September last year, the company opened a new $275m engine plant at its Elabuga, Tatarstan, production facility to make 1.6-litre petrol engines with a “significant level” of localisation.

The facility has a capacity of 105,000 engines, ramping up to 200,000 if necessary, although the market would have to expand dramatically for it to reach that figure. At least Ford sales are looking brighter; the maker bucked a continuing downward trend to post an impressive 77% rise in demand in the first two months of this year.

Hyundai is another OEM which is boosting investment in the country, and in October last year celebrated its one-millionth vehicle built at the St Petersburg plant it shares with Korean sister company Kia. The combined companies in Russia reckon they are at a localisation rate of 46%. Last year, Automotive Logistics reported that Hyundai would invest $100m in the factory to prepare for production of the Creta small SUV, a car that has been very well received in India, and for a new version of the Solaris small saloon, currently Russia’s bestselling car. Capacity will rise by 5% from its current limit of 200,000. However, the company says it has no plans to localise the engines.

Is the market turning?Right now, the market is being propped up by further commitment from the Russian government, which has continued its financial support for consumers into 2016 to the tune of 20 billion roubles through the first half of the year. Is this approach working? February sales were down, but less than previously. “The pace of year-on-year decline is slowing down visibly, with minus 13% to the smallest value in 14 months,” said Joerg Schreiber, chairman of the AEB’s automotive committee. “This is an expected and welcome development.” 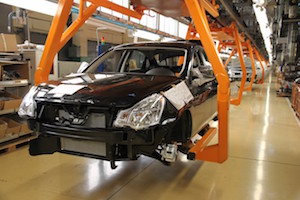 Renault-Nissan’s Ghosn commented at Geneva that Russia will be back – but without giving a timeframe. “Yes, now we are losing money but we have made a lot of profit in the past and in the future we’ll make a profit,” he said. Even GM’s Karl-Thomas Neumann is open to a possible restart. "We still have a dealer network for Cadillac and premium Chevrolet models, so never say never," he told Automotive News Europe. He also said he would keep the St Petersburg factory. “It doesn’t cost us much.”

Russia’s “endemic volatility” (as one analyst described it) means there are always highs to go with the lows. As Andersson put it last year before his ousting: “Russia will always be one of the top ten markets in the world car-wise. You have a huge potential and a relatively bad public transportation system. When you see how many people live in rural areas, clearly there is a need.”