With the attractiveness of a vehicle’s finish being key to purchasing decisions, automotive manufacturers are striving for better means of quality control. AMS reports on the most sophisticated technologies available 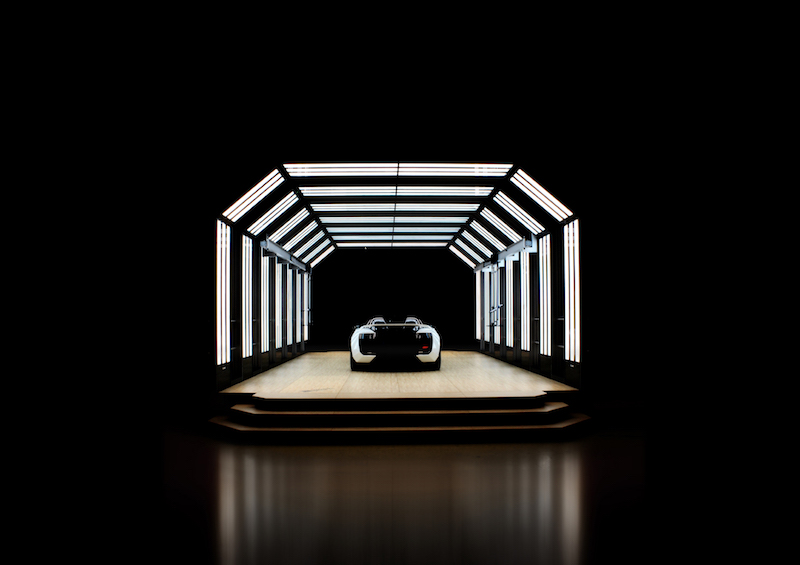 One thing that has not changed in the automotive market is that the appearance of a vehicle in the showroom remains a key factor in determining a customer's decision about whether or not to make a purchase. By contrast, something that has changed, particularly over recent years, is the ability of carmakers to monitor and manage the conditions inside vehicle painting booths, which impact on the paint finish, and to keep close control over quality. These paintshop processes are starting to involve the use of sophisticated, automated systems – and may one day become part of the Internet of Things (IoT) revolution (see box below).

Just four years ago, Ford began its first foray into the use of automation as a paint quality inspection tool with the introduction of what it now terms its Automated Inspection System (AIS) at the Dearborn Truck plant in Michigan, for use in F-Series production. Since then, the company has shown its faith in this system by rolling it out at ten other locations around the world (see box).

Marc Tornero, project manager – automation, robotics and automated inspection systems, with Ford in the US, explains that the system uses a mix of high-resolution digital cameras and industry-standard fluorescent lamps, plus powerful local computing and custom software. As many as 16 cameras capable of recording up to 15 images per second are deployed in an inspection station to carry out an automated, 15-second routine in which over 3,000 images of the vehicle surface are captured. The system then generates a single composite image of the assembly for display to a human operator, with the location and relative size of any particles that have been detected clearly indicated by means of colour coding. Subsequent removal of any blemishes is carried out manually.

While the core technology of the AIS has remained constant since its debut, Ford has made some improvements to its implementation and performance. According to Tornero, the human-machine interface and display functionality have both been enhanced. Additionally, further connections have been made between the AIS and plant quality systems to better track any issues and fix them before the vehicle leaves the factory.

Ford's automated system, which uses cameras and lamps, can inspect more than 90% of a vehicle surface

Ford has overcome most of the ‘blind spots’ which occurred in the initial implementation, when only about 90% of a vehicle surface could be examined automatically, by introducing more hardware capability and additional vision techniques. This has been especially enhanced at plants such as Kansas City where the vehicles may not be positioned in exactly the same way every time.

According to Tornero, Ford has also improved its data management: “We have more data than ever before that allows us to track when an issue occurs, where on the vehicle it occurs, what colour is being used and at what point in the process it occurs.” The AIS is now facilitating a more proactive approach to fault remediation. “We use that [data] to help identify potential issues, so we can fix them immediately to ensure the customer receives a quality paint coating on their vehicle,” he explains.

As for the future, Ford will explore the potential for yet more enhancements. “There are always opportunities for improvements with technology advancements,” Tornero states, adding that with the AIS these will include further reduction of blind spots, especially near character lines and panel edges.

Enhancing light tunnel capabilitiesWithin the last year, Germany-based painting systems supplier Eisenmann has taken its first step into the use of light-emitting diodes (LEDs) as a paint finish inspection tool. It has done so through the introduction of the VarioInspect light tunnel, which it regards as setting a new benchmark in terms of technology implementation, ergonomic efficiency and overall effectiveness in the inspection of automotive paint quality.

In appearance, the VarioInspect light tunnel is markedly different from conventional installations. Instead of being an enclosed, box-like structure, it looks more like a cage in which a series of vertical elements turn inwards and are then bridged over horizontally between their summits, alternating with empty space to create, in effect, a series of portals. The polished interior surfaces of those three elements – vertical, angled, horizontal – are fitted with LEDs to provide the illumination to support visual inspection by personnel stationed within the structure.

Depending on the size of the installation, 30 car bodies or more can move through the light tunnel every hour. Personnel are positioned left and right in order to enable them to inspect a defined surface area of 1.0-2.0 sq.m per eye scan.

In operation, the interaction between the forward motion of the car bodies and the vertically arranged light units, which are at right angles to the body movement, produces a contrasting light-dark striped pattern on the painted surface. At the same time, the continuous light bands guarantee a common light intensity along the car body. Therefore, says Jan Hammermann, senior manager with Eisenmann, even the smallest irregularities are easier to recognise. Any superficial dust pockets that are detected can be polished away as the vehicles continue in motion, while more serious blemishes are marked so that the vehicle can be redirected into a standalone station for remedial work.

Improving conditions for workersThe ergonomic implications of the VarioInspect configuration are considerable, since the requirement to detect tiny imperfections demands extreme levels of concentration from quality-control employees. Indeed, a basic rationale for the development of the system is that even today the human eye cannot be completely replaced by automated processes where quality control is concerned. As such, the ergonomics of the installation are critical to its effectiveness as a quality-control system. The distinctive vertical arrangement of light bands in the VarioInspect structure means that, in comparison with the traditional horizontal arrangement, employees can perform their work in a standing position without having to move repeatedly between a crouching and an upright posture.

Hammermann emphasises the ergonomic benefits. “In comparison to the closed cabin construction methods, the open portal construction method of the light tunnel promotes a positive, spacious feeling and creates a comfortable working environment,” he states. One reason for this is aural rather than visual. The open configuration results in a greatly reduced sound level, since there is no echo. The structure does, however, impose a requirement for appropriate ambient light conditions; Hammermann says at least 1,000lux are needed. The new LED lights, with an efficiency rating of 20%, also contribute to a better working environment through their low heat generation. 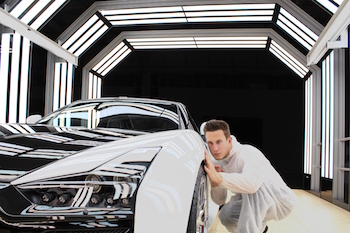 The LED units were developed by Eisenmann in collaboration with a number of partners and research institutions. The light bands they produce can be regulated from warm to cold white continuously, to adjust them to all process requirements including paint colour and gloss level. Hammermann says that the system provides for individual control of each LED lighting phase. Therefore, reflection can be conditioned through a precisely adapted change of the light intensity or temperature. For instance, it generates a colour temperature of 3,000K on a white surface, substantially clearer than 6,000K.

In April 2016, VarioInspect won a product design award in the industry, machinery and robotics category from the Germany-based organisation Red Dot. Although no VarioInspect installations are yet in operation in the automotive industry, Hammermann confirms that two of the systems have been sold.

The ability of carmakers to monitor and control, in real-time, the conditions inside vehicle painting booths has improved immensely in recent years. What used to be a ‘black box’ aspect of the whole production process, in which vehicles effectively ‘disappeared’ and process control was in large part a subjective exercise, has now become a continuously controlled activity.

That is the view of Niraj Tyagi, head of Internet of Things (IoT) for Tata Technologies, the India-based provider of technology support services. According to Tyagi, the company now counts 11 major vehicle-makers among its clients worldwide, with support for painting installations a significant element of its overall business portfolio. Tata is currently working with one of those OEMs to install a new paintshop that will use IoT technology to monitor temperature, quality and humidity by capturing real-time data using IoT gateways and sensors, then sophisticated analysis to optimise operational efficiency. Tyagi says that the crucial capability will be the more effective exercise of production control at a level lower than with the generic manufacturing execution systems (MES) commonly employed for the task.

According to Tyagi, the benefits will be twofold: enhanced feedback at a device level from equipment directly involved in the painting process; and improved ‘feedforward’ to enable in-process modification of paintshop conditions. The key difference, he states, will be in the speed with which data can be iterated between the paintshop itself and the MES and then the response transmitted back to the shopfloor. The new set-up will enable this to be accomplished in real time.

Though not an abstract concept, the IoT-enabled automotive paintshop does not currently exist as an established reality. “It is not yet fully qualified,” says Tyagi, explaining that major stumbling blocks at the moment include a lack of standards to provide for the interoperability of equipment from different vendors, and system security. However, he believes that the resolution of these issues is only a couple of years away, perhaps less.

Tyagi is confident that when this does occur, it will enable quantifiable improvements in the painting process: “We will definitely be able to manage paintshops better.” He says the key enabling factor will be a tightening of the loop between in-process monitoring, corrective decision-making and implementation of remedial actions.

One of the essential local environmental factors that must be accurately controlled in any automotive painting installation is the relative humidity (RH) level within the booth itself. The usual target figures are 72% where the process involves the application of a water-based, liquid paint and 45% where an electrostatic process involving the use of dry powder is concerned. The disparity is the consequence of the differing requirements for paint adhesion that each type of process requires.

In the first case, the key objective is to ensure that none of the water in the paint ejected from the paint gun is absorbed by the surrounding atmosphere before it reaches the car-body surface, hence the need for a relatively high humidity level in the booth. In the second, the primary aim is to avoid the build-up of extraneous electrostatic charges that could interfere with the process, therefore the target RH again has a minimum level albeit one that does not need to be as high as for liquid paint application. 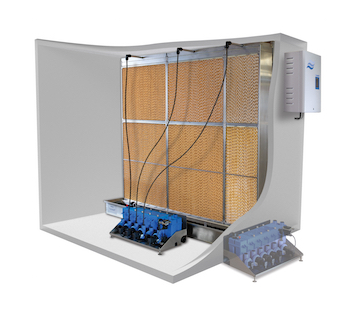 These figures are provided by Carl Batchelor, global business development manager for humidification system supplier Condair, which has provided its technology for several major vehicle-makers, including JLR in the UK. Batchelor says that, while creating and maintaining such conditions is a task that the company regards as quite routine, the products it uses to do so continue to be developed.

One example is the company's ME Evaporative pump, which was introduced just a year ago with automotive painting as a primary target application area. The product aims to reduce energy consumption without compromising on quality; it does so by replacing the single 240V AC pump motor that would typically be used with five 24V DC units. Also relevant to the intense production demands typical in a car plant is the capability to mount the hydraulic unit containing the water tank and pumps externally to the air handling unit, thereby facilitating ease-of-access and reducing downtime for maintenance.