As BMW Hams Hall ramps up its manufacture of next-generation engines, AMS becomes the first to take a look at its new production lines – installed as part of the OEM's £750m investment across UK facilities 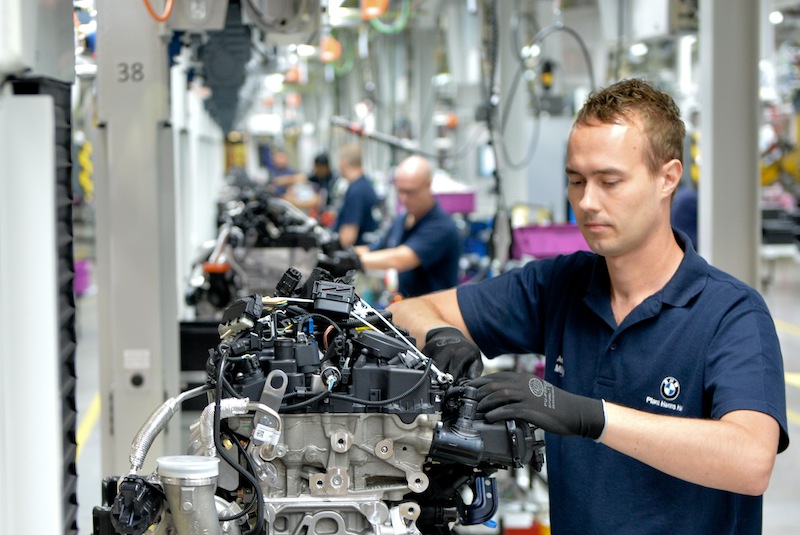 “Our new engine family of highly efficient, three-, four- and six-cylinder engines have a standard design, a high number of similar parts and a uniform process for manufacture,” explained Ilka Horstmeier, head of BMW Group’s global production network for engines and electrified powertrain, in October. “This gives us a large amount of flexibility and means we can optimise production between each of our manufacturing locations and respond quickly to changes in customer demand or market developments.”

Horstmeier was speaking at the conclusion of preparations by BMW Hams Hall, North Warwickshire, to play a key part in this transnational production network for next-generation Efficient Dynamics engines, after benefitting from a share in the OEM’s £750m ($1.1 billion) investment in the UK between 2012 and 2015. “The transformation in our plant has been huge,” said Markus Fallboehmer, plant director. “Over the last few years, we have completely re-developed our two main production areas and installed over 600 brand-new pieces of equipment and machinery.”

AMS visited that same month to see the three new production lines in the 30,000 sq.m machining hall, plus the revamped assembly building. Ralf Congrave, general manager, Machining Operations, explained that the new crankshaft line was the first to come on stream, in late 2013, followed by the cylinder-block and cylinder-head lines in 2014. There is also an older line making cylinder heads for the Prince engines still assembled within BMW’s international manufacturing network, although this will continue for less than 12 months before the space is redeveloped for production which has yet to be announced.

With the recent investment, the plant is transitioning from producing four-cylinder engines for the BMW 1-Series, 3-Series and X1, plus Minis, to focusing on next-generation three- and four-cylinder engines for the latest Mini models such as the new Clubman, as well as the i8 hybrid sportscar – for which it is the exclusive supplier. For the first time, Hams Hall is also supplying machined components to other engine plants in BMW’s production network: Munich, Germany and Steyr, Austria. The number of cylinder-head variants that can be made on the same line will expand from one to nine, while the block line will be able to handle eight and the crankshaft line five.

The revamp thus involves not only an increase in volume but a leap in product complexity – and flexible manufacturing that will enable BMW to respond more effectively to changing market demands.

Human operators in the machining hall are mostly occupied with maintaining throughput, measurement and quality control

Automating for greater efficiencyThe machining hall is highly automated, with only 19 workers for each line per shift. The human operators are mostly involved in maintaining throughput, measurement and quality control; self-correcting machinery takes care of the drilling, grinding and milling. Despite the relatively low number of workers, Congrave says that the human resources aspect of the new operation was “quite a big challenge” and required a three-pronged approach: the retraining of machining personnel; the upskilling of assembly workers who already had experience of conventional (rather than flexible) machining systems; and the hiring of new individuals with a minimum of five years’ experience.

The machining hall is still ramping up but the block and crankshaft lines are already operating on four shifts, while the cylinder-head line is on three. The crankshaft line is turning out 12,000 parts per week, close to maximum capacity, while the head and block lines are making 9,000, with space for a further increase in volume. Altogether, they will produce over 1m components in 2015.

Besides the manufacturing processes themselves, most of the component transportation within the hall is by automated guided vehicles (AGVs), which are able to automatically unload finished components at the central warehouse. Around half the parts ultimately go to the onsite assembly hall, while the remainder head to despatch areas for export to Europe. However, all the components for the three-cylinder, 1.5-litre petrol engines for the i8 are sent next door for largely manual assembly.

The ‘backbone’ of the machining hall, explains Congrave, is the Felsomat intelligent central logistics system, which can transport parts both forwards and backwards over the top of the machining cells. Unlike the previous set-up, this enables technologies to be grouped together rather than positioned according to where they occur in the production process; for example, rough and finish grinding are now co-located. This strategy covers the 11 main technologies for the crankshafts, for which there are 71 machines, and five each for the blocks and heads (83 and 74 machines respectively). The intelligent logistics concept was first introduced at BMW’s engine plant in Steyr, Austria, and is now being implemented at BMW Brilliance Shenyang, China.

"The variability [in assembly] is managed by the automation"– Brendan McCarthy, BMW

Tool changes are automated and the machines are interchangeable; if one machine or even a whole cell goes down, explains Congrave, another can take over. All of the parts produced in the machining halls are inspected and they are also data-matrix coded (DMC) for full traceability even down to the tool number, so that each can be tracked “basically to the second it was made”, says the general manager.

Managing variability in assemblyAccording to Brendan McCarthy, head of assembly, a two-day orientation period was enough to familiarise his team with the new product line-up – “they don’t need to be told how to make an engine”. While the personnel are highly skilled, a significant proportion of the work is handled by automated systems so that each operator is largely freed from tasks such as tool selection and part picking, and can focus on the specific assembly tasks to be performed at that workstation. This is important for the efficient manufacture of multiple engines in the same operation. “The variability is managed by the automation,” says McCarthy. The key robotics providers at Hams Hall are Kuka and, especially, ABB.

At present, the factory operates according to an average cycle time of 60 seconds, although the automated stations can hit 45-50 seconds. Having started its new production in July 2015, the assembly hall is currently in ramp-up phase, turning out 50 jobs per hour at the time AMS visited in October and scheduled to reach 60 by the end of December, though McCarthy is keen to “get there early”. He says the “big steps are gone” and that it is now a case of implementing marginal adjustments. According to McCarthy, the facility will move to three shifts in mid-2016. 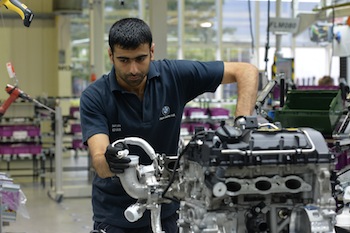 In the assembly hall, production is divided into the high-volume run and the largely hand-built i8 engines

There are five process streams in assembly: cylinder head; main assembly; short block; complete assembly; and engine final testing. The workflow is “driven by the head”, says McCarthy, explaining that the engine assembly process is never launched before the head is verified for release from storage in the roof (which has a buffer of 280 units). The block joins main assembly from the other side of the hall, built in a mostly automated process facilitated by the large size of its parts. The DMC coding enables a faultless match between the head and the block designated for a particular engine.

Most of the personnel per shift (around 100 across all job roles) work in complete assembly, where human dexterity comes to the fore and automation is relatively limited. However, the engines for the i8 are assembled mainly by hand on a separate line from the mass production, owing to the technical complexity of the process and the small volume required at present. The 20 personnel here have been specially selected for their knowledge of the product and are allowed a cycle time of 11 minutes – considerably longer than the high-volume production.

The i8 engine parts are collected and manoeuvred by trolley from a kitting area, which is organised by a visual management system of national flags suspended overhead. At the end of the assembly process, each completed engine is manually lowered (with a lift assist) onto a pallet before it is taken away by AGV. Currently, five engines are being produced per hour, but McCarthy confirms there is “potential to expand”.