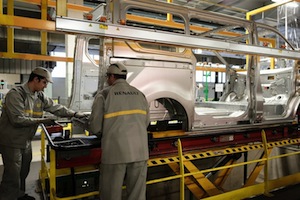 France – The plant has produced more than 8m vehicles since opening in 1964, and from 2011 to 2013 embarked on a €230m ($313m) transformation plan to begin a new phase of production. Sandouville will now build light commercial vehicles (LCVs) for the first time.

The plant will make the new Trafic model, which is to be launched this summer; the Opel/Vaxuhall Vivaro previously built at the Nissan plant in Barcelona, Spain, and the GM Luton in the UK; as well as the Laguna and Espace vehicles, until their successors start production at the Douai plant.

The adaptation of Sandouville has required 5,000 tonnes of cast iron to manufacture the LCV production line tooling; the clearance of 20,000 sq.m in the bodyshop to install new tooling and 187 robots; major changes to the paintshop to accommodate LCV dimensions; and the combination of the two assembly lines for the Espace and Laguna, plus the installation of a dedicated line for the Trafic. In the paintshop, the anti-corrosion treatment tunnel was raised by 70cm and the paint booth extended by 12m; cradles, conveyors and interior robots were installed for the application of mastic beading and paint.

Consequently, Renault can now make its entire LCV range for Europe in France, with the Kangoo at Mauberge and the Master at Batilly in addition to the Trafic at Sandouville.