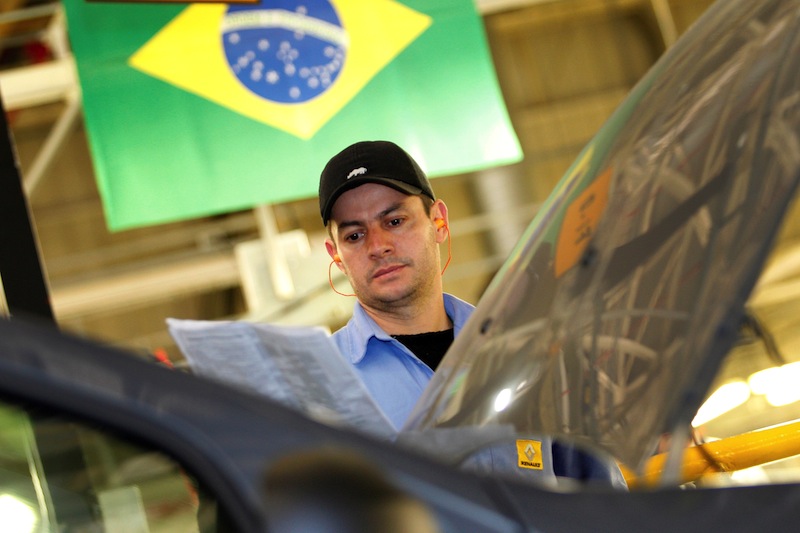 Earlier this year, Renault announced its latest big push to boost production and sales in Brazil with an investment of €162m ($215m) for its manufacturing complex in Curitiba, Paraná State. The funds will be sunk into the plant between 2014 and 2019 for the development of two new models, marking a fresh phase in the ongoing growth of the site. The OEM has been making vehicles at the location since 1998 but is now aiming to dramatically increase capacity in order to seriously compete with big hitters in Brazil such as Fiat, Volkswagen (VW), Ford and Chevrolet.

In 2011, Renault Group chairman and CEO Carlos Ghosn announced a huge revamp to the manufacturing complex that would increase annual capacity by 100,000 to 380,000 vehicles. He pointed out that Brazil was now Renault’s second largest global market after France, beating Germany for the first time. “Brazil is a priority in the Group’s global growth strategy,” he said in a statement. He targeted an 8% market share by 2016, which at the end of March this year looked on track at 6.7%, and said the company would put €200m into the revamp.

The overhaul introduced two new vehicles – the new Logan subcompact saloon and the new Renault Master LCV, which is the same model as made in Europe. These joined the Duster SUV, the Sandero subcompact and related Sandero Stepway. As with the Logan, all are rebranded models from Renault’s low-cost Dacia marque.

The Curitiba upgrade was difficult to implement and meant stopping production at the manufacturing complex for six weeks. Speaking at the Automotive Manufacturing Solutions conference in São Paulo last year, plant director Luiz Quinalha told delegates that the team had to install what amounted to a whole new plant within the existing facilities in a relatively short amount of time.

The revamp required the simultaneous execution of 65 separate projects, including the complete replacement of the paintshop, in order to allow production to restart as quickly as possible.

Other solutions to increase capacity were considered, said Quinalha, but complete stoppage was considered best. He added that virtual simulation was used to gauge how the changes would fit together and ensure a seamless start-up.

The reopening of the plant in March last year clearly had an impact on Renault sales in 2013. In a market which increased by 4.3% to 2.85m, Renault sales slipped 5.7% to 170,480 according to figures from Anfavea, the country’s automaker association. In total, last year Renault made 172,095 cars and 110,500 light commercial vehicles (LCVs) at the Curitiba complex. That drop in sales was corrected in the first quarter this year, when Renault registrations increased 22% percent while the market fell by 2%.

Cultivating Curitiba
Renault’s Curitiba story began in 1995 when the OEM decided to make Brazil its springboard for global expansion after decades of relying mainly on Europe. Renault bought a 250-hectare site near the Paraná State capital and named it the Ayrton Senna complex, in tribute to the Brazilian driver who died at the wheel of a Williams Renault F1 car in 1994.

The choice of location was brave, given that it represented a move away from the traditional São Paulo automotive hub; at this point only Volvo Trucks was manufacturing at Curitiba. However, it coincided with VW’s decision to build a factory in the same city, and the German OEM began production a year after Renault by launching manufacture of Audi A3s and VW Golfs in 1999. The plan to build cars from VW’s premium brand was not vindicated by sales and the OEM switched to making smaller models; however, the company has said it will return to making Audis next year with both the A3 (again) and the Q3 small SUV.

Like other States in Brazil, Paraná was eager to attract automotive OEMs and offered an investment of its own; Renault Brazil is still 0.15% owned by the State. Renault built the initial 141,000 sq.m plant with a 15,000 sq.m supplier park alongside it. One year later, it opened a 400,000-capacity engine plant to produce the 1.6-litre and 1.0-litre units that would not only make their way into the Scenic people-carrier and Clio 2 subcompact built by Renault but would also be exported to other plants in South America, and even back to Europe. The facility also initially made engines for French rival PSA Peugeot Citroen in Brazil.

By 2012, the engine plant had exported 1.2m units to assembly operations in countries such as Colombia. The same year, Renault announced that it would expand the engine plant by 5,000 sq.m to increase capacity to 500,000 units a year in preparation for the increase in car assembly capacity in 2013. 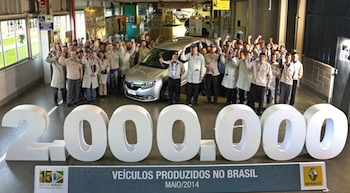 Subsequent to the launch of the engine plant, the Ayrton Senna complex gained greater global recognition a year later when a second assembly plant was opened in 2001. This was the first facility which was planned from the start to be shared with Renault’s new alliance partner Nissan.

By this point, Renault could already draw on 73 automotive component suppliers either in Paraná or nearby States, and the company boasted that both the Master and the Frontier would have more than 60% local content, with 90% of suppliers overlapping, despite the differences between the two vehicles. Later, the plant was adapted to also build Nissan’s Lavinia and Grand Lavinia people-carriers.

Pushing up local production
Renault’s LCV output started slowly. Production was just 1,217 units in 2003, and by 2010 it was still just under 11,000. But in the past three years, production has rocketed and last year Renault made 110,500 units, of which 23,060 were exported. Renault’s build-to-sell-local strategy worked, and in 2001 it had a market share of 5.4%, putting it fifth in the market just behind Ford. Since 2001, Renault has tripled its sales to grow with Brazil’s rising market but remains fifth, still behind Ford – and a long way behind market leader Fiat and close rivals GM (with Chevrolet) and VW. However, Renault is managing to stave off competition from strong Asian OEMs such as Hyundai, Honda and Toyota by way of a cost-effective model range.

The Inovar-Auto initiative of the Brazilian government is designed to attract more manufacturers into the country by making it financially attractive to make rather than import vehicles, and Renault for one now makes pretty much all it needs for the local market. At Curitiba, the brand’s output for 2013 was 282,595 cars and LCVs; in the same year it sold 236,364, of which 186,000 were made in Brazil. The rest of the output, some 40,000 cars and 23,000 LCVs, was exported; just over 50,000 vehicles were imported. 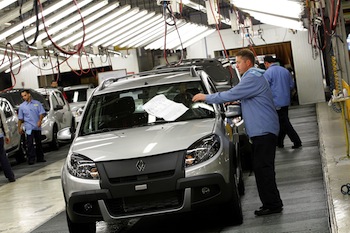 Thus the figures for Renault align closely with Brazil’s aims to import fewer vehicles and export more. According to Anfavea, total new vehicle imports have dropped from 24% of total sales in 2011 to 19% last year. With Renault planning to introduce two new vehicles to the Curitiba plant, the nation looks on track to reduce its import quota still further in the coming years.

Renault’s expansion at Curitiba has been backed by a big push on dealerships, and the OEM now has 275 outlets in the country. Meanwhile, a new parts distribution centre was announced for Paraná back in April, with €78m pledged to construct a centre big enough to handle demand not just from Brazil but also other South American markets such as Argentina and Columbia, as well as shipping Brazilian-made parts to Central America, South Africa and Europe.

Renault’s decision to target Brazil back in 1995 eventually proved to be a smart one. Back then the car market was 1.4m, which was actually a high point ahead of a slump that cut the market to just over 1m in 1999. But it rebounded impressively to 2.8m last year, and Renault’s subsequent investments in the Ayrton Senna complex have been able to track the growth via models like the cut-price but well-styled Duster SUV, which seems suited to the market. The LCV market has similarly boomed to just over 800,000 units last year from 245,000 in 1995, and again Renault has been similarly well-placed to supply local product when it was needed. Such successes on route to further growth in the country must be very gratifying for Brazilian-born CEO Carlos Ghosn.