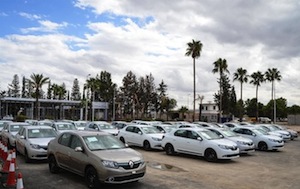 Algeria – Oued Tlelat has opened with one production line and an annual capacity of 25,000 vehicles, but a second phase currently under consideration could see an increase to 75,000 units per year, plus closer integration of suppliers and the establishment of body and paint facilities.

The new Renault Symbol will roll off the line at the new plant in the next few days, marking the start of production in Algeria. Renault already has a 25% share of the market.

Over the past few months, Renault Algérie Production (RAP) has hired nearly 300 personnel, who have received instruction from Renault experts at the automotive training centre (CFPA) in Oran. Some workers have also undergone training at Renault-Nissan Alliance plants, including sites in Romania.