Renault Captur to be made in Paraná 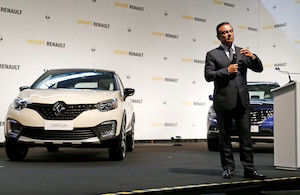 Brazil – The vehicle will be assembled on the same line at São José dos Pinhais that produces the Renault Duster, Sandero, Logan, Duster Oroch and Sandero Stepway. The launch of the Captur in the increasingly popular C-SUV segment will boost Renault’s growth in Brazil, says the OEM.

“”With this new product plan, we expect to capture a significant percentage of the fast-growing SUV segment in Brazil,” commented Carlos Ghosn. “With three of our SUV models to be produced in Brazil, our confidence in this market is further confirmed.” The Captur and Kwid will be launched in 2017, and be joined by the imported new Koleos.

Ghosn stated that all investments in Brazil which have been announced so far are being maintained despite the country’s economic downturn. The first investment cycle of 1.5 billion reais ($468.3m) for 2010-2015 was completed ahead of schedule, while the 500m reais for 2014-2019 is progressing as planned, says Renault.