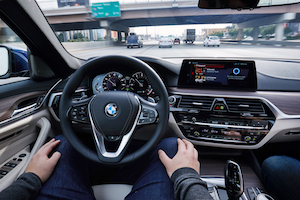 In 2015, Samsung Electronics set up a team specifically to look at ways of penetrating the automotive industry. The South Korean tech giant was seeking to gain a firm foothold in an automotive electronics market that it predicted would grow to more than $100 billion in the next decade. Towards the end of last year, Samsung began to act on those ambitions. The group announced a deal to buy the US car infotainment and audio company Harman, valued at about $8 billion. According to the Financial Times, this is Samsung’s biggest acquisition to date.

In Silicon Valley, meanwhile, other tech giants such as Apple and Google have focused their automotive enthusiasm upon building connected and self-driving vehicles – technology they could potentially license out to the OEM establishment. In Japan, telecommunications and internet corporation SoftBank has already teamed up with Honda to examine ways of applying humanoid robotic technology in vehicles. The ideas range from the pragmatism of park-assist functions to the notion of cyber-companionship for drivers on long, lonely car journeys.

The attraction of automotive to these tech giants is clear; the four key trends shaping development in the industry – electric and autonomous vehicles, car sharing and connectivity – all play to the strengths of the newcomers. For their part, OEMs have recognised the technology convergence. Ford, for example, is actively working with more than 40 tech start-ups. It has announced plans to double the size of its testing and research facility, the Ford Innovation and Research Centre in Palo Alto, California – the spiritual hub of the tech industry in Silicon Valley. This is also where we find Tesla’s HQ and a Mercedes-Benz R&D centre. Meanwhile, BMW’s Future Lab is located just a short distance away in Mountain View – Google’s hometown. According to business analysts at McKinsey & Co, the new, tech-savvy entrants are well accustomed to disruptive trends and will quickly transform vertically integrated automotive value chains into “a complex ecosystem”.

In the process of putting together our first ATS supplement (available with the Jan-Feb issue of AMS), we heard from key players among the automotive tier supply market worldwide. Shifting customer preferences, greater connectivity and the drive to innovate were all recurring themes, common to every global region. As we discovered from speaking to big players such as Continental, Visteon, GKN, Delphi, Henkel, Yanfeng and IAC, these issues already apply just as strongly on their own manufacturing lines. In terms of parts, process and planning, the influence and enabling factors of digital technology are having a huge impact on their decision-making.

While the tech giants are keen to push further into the automotive industry, they would be wise not to underestimate the broader demands of the market and the expectations of OEMs. During the interviews I carried out, a senior manager at a major automotive electronics plant discussed the new tech industry interest in the automotive world, recalling an article he had read about the newly launched iPhone 7. In this piece, the developers at Apple spoke of their pride at how the new device could now be dropped from 1.7 metres without breaking. The plant manager smiled and said: “Oh, to have the bar set so low...”