Re-defining efficiency in the paintshop 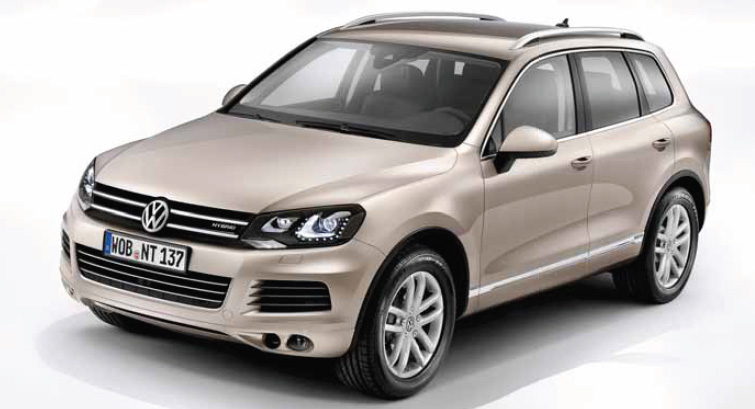 When Volkswagen went looking for big reductions in energy consumption and emissions at its Bratislava plant, its facility provider responded with some novel solutions.

The paint process accounts for up to 70% of the energy consumed in manufacturing a car. A 75% reduction in energy consumption not only drives down operating costs significantly, it also reduces carbon emissions. The Eisenmann paint shop at Volkswagen’s Bratislava plant proves that this can be done. The E-Scrub electrostatic overspray separation system makes a key contribution to resource efficiency.

In their efforts to make production more sustainable, carmakers have prioritized cutting emissions and conserving resources. This was evident in Volkswagen’s call for bids for an additional paint line at its plant in Bratislava, Slovakia – to be used for the new Volkswagen up! and other compact models. Eisenmann was selected as prime contractor for the paintshop on the strength of its resource-efficient solution. In comparison to conventional painting facilities, the Eisenmann technology can deliver energy savings of up to 75%. Furthermore, it reduces water consumption by about 87%. This is due above all to the innovative E-Scrub electrostatic overspray separation system. And Eisenmann’s solution not only generates substantial savings but also creates ideal conditions for the vehicle finishing process. The bodies-in-white are conveyed through the pre-treatment and electro-dip coating lines by an Eisenmann E-Shuttle system.

Efficient air recirculation
The new paint shop is designed to process 150,000 car bodies a year. In line with Volkswagen’s “Process 2010”, a primerless coating is applied. Overspray-laden exhaust air from the paint process is sucked out and routed to the separation system located below a grid in the spray booth. E-SCRUB combines maximum separation efficiency with minimum pressure loss, permitting the solution to operate with 95% recirculated air. 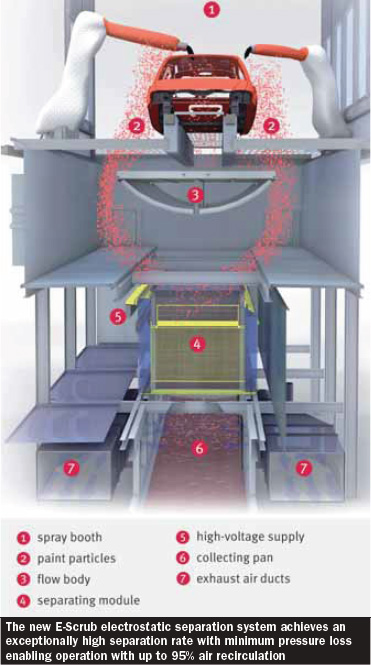 High voltages instead of filters
The system’s high efficiency is the result of its ingenious operating principle. The overspray produced along the entire painting zone is transported to the E-Scrub unit. The overspray-laden air passes through an alternating arrangement of active and passive elements. The highvoltage wires in the active elements give the paint particles a negative charge. As a result, they are attracted and retained by the passive, earthed separating plates, which are coated with a separating agent. Once the paint particles have been removed by a special discharge system, most of the separating agent is pumped back to the separating modules.

By eliminating mechanical filter systems, E-Scrub ensures constant airflow in the spray booths, without pressure fluctuations. This creates optimum conditions for producing high-quality coatings. Furthermore, the separation system does not significantly alter the condition of the air, which means that a large proportion of the scrubbed air can be sucked in and returned to the spray booth by means of a recirculation fan.

Substantial energy and chemical savings
Eisenmann has recently launched an improved version of E-Scrub, called v.2. Among other improvements, it uses an expansion tube instead of rollers to coat the active modules with the separating agent, thus reducing the number of moving parts in the separation system and making it less prone to faults caused by dirt ingress.

The new paint line in Bratislava operates with about 80% recirculated air and 20% fresh air. The fresh air is preconditioned because it comes from other areas of the plant, such as quality control. This plays a role in significantly reducing energy consumption for the air supply in comparison to supply/exhaust air systems – from an average of 50,000MWh to only 11,000MWh per year. There is a corresponding reduction in CO2 emissions. E-Scrub also drives down water consumption – from approx. 60,000 m3 for wet scrubbers, to an annual average of 7,500 m3. Moreover, far fewer chemicals are required.

Dramatic reduction in particulate emissions
The electrostatic separation system can remove the very smallest paint particles from the air. In conjunction with air recirculation, particulate emissions at Volkswagen’s facility in Bratislava are below 0.3 mg per m3 of air both for the base coat and the clear coat lines. This figure is far lower than the 3mg per m3 threshold permitted by Germany’s Technical Guidelines on Air Quality Control (TA-Luft). With the exception of the separating agent, which is recycled, E-Scrub does not require any other chemicals to remove the paint particles from the air. This results in lower waste. Depending on the solids content in the paint, electrostatic separation of a kilogram of overspray produces less than a kilogram of paint sludge, whereas a dry scrubber generates several kilos of waste requiring disposal. This feature also contributes to protecting the environment and cutting carbon emissions and operating costs. In light of these benefits, Volkswagen also employs Eisenmann’s electrostatic overspray separation system at its new paintshops in Brazil and China.

Optimized pre-treatment process with E-Shuttle
The E-Shuttle conveyor system used to transport bodiesin- white through pre-treatment and electrocoating also plays a role in conserving resources and maximizing coating quality. Because every shuttle has three freely programmable axes (horizontal, vertical and rotation) and is equipped with its own controller, dip curves and process times can be individually and easily specified, for any type of body. The flexibility of the E-Shuttle, compared to conventional rigid pendulum conveyors, makes for faster flooding and draining. Furthermore, it overcomes the difficulties associated with hard-to-reach cavities and indentations. And movement sequences tailored to each individual body ensure a perfectly even coating with fewer inclusions and with less force exerted on the bonded surfaces. The process bath length can be reduced in comparison with systems that use pendulum conveyors; this cuts consumption of the process fluid. This is also good for the environment and drives down operating costs as less water, chemicals and energy are required.