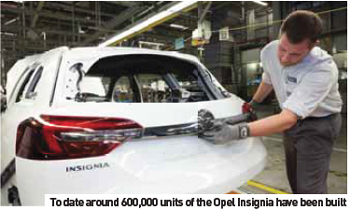 Germany – Start of series production for the new Opel Insignia has seen the first model for sale roll off the assembly line in the Rüsselsheim plant.

“This is a moment that we have all been looking forward to, as the new edition of our flagship that we are officially presenting at the IAA in September is the next important milestone in our model offensive,” said CEO Dr. Karl-Thomas Neumann.

Since start of production of the first Insignia back in October 2008, around 600,000 units of Opel’s flagship model have been built, with key markets being Germany and the UK.