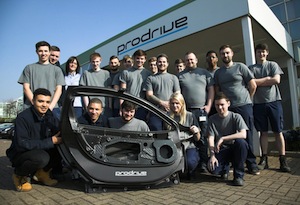 UK – The 25 apprentices reached level-two NVQ in composite engineering, after completing what Prodrive claims is the largest composite apprenticeship scheme in the country. The newly qualified individuals are now working at the company’s Milton Keynes factory, on programmes including component manufacture for British sports vehicles and supercars.

Prodrive says it took the decision in 2013 to recruit and train its own young talent, owing to “a dramatic growth in business and a general lack of skilled composite technicians, in what is an expanding global industry”. Consisting of work-based and classroom experience, the training was delivered with the assistance of the local TXM Academy.

“Back in 2013 we employed about 70 staff, but with major programmes coming on stream we realised [we] would soon need nearly 200,” said Chris Smith, Prodrive Composites operations director, who oversaw the apprenticeship programme. “There just aren’t that many skilled composite technicians in the UK yet, because it is such a new and growing sector, so our only option was to train our own.”

The company has now started recruiting another 15 apprentices for 2015, who should be qualified in the next 12 months.