Potential for aluminium in high volume

When, at a demonstration of the new Range Rover Sport, the presenter talked about it being in excess of 25% stiffer than its predecessor, the point was made by forcing the vehicle’s front right wheel off the ground, tilting the whole thing across its diagonal axis and banging it back down to earth. Certainly, there was no evidence of sag, or any suggestion of the creaks and squeaks that one would expect from most other vehicles, if they were to be put through that particular exercise.

Like the latest Range Rover on which it is based, the new car is made from aluminium and it has delivered improvements not just in stiffness, but in weight, recyclability, performance, NVH and fuel economy. This is just the latest iteration of Jaguar Land Rover’s (JLR) march towards an all-aluminium vehicle line-up. Mark White, now the company’s chief engineer for body, complete business unit, has been involved from the outset; he was team leader on the original long wheelbase XJ sedan in 2002. If anyone understands the company’s aluminium strategy, he does, so why, for example, go for aluminium rather than, say, engineering plastics?

“Of course, we use some engineering plastics,” says White. “The rear tailgate of the new Range Rover Sport, for example, is an SMC (sheet-moulding composite) part. We incorporated the interior trim with the moulding because, while aluminium is lighter than SMC, we would have ended up putting decorative trim on the inside and that would have added weight.”

He adds that there are still some issues with engineering plastics that preclude its wider use, such as surface quality. “The quality has to be top notch and we still can’t get the finish on horizontal surfaces – the tailgate is vertical, obviously – and there is a need for stiffening ribs in order for it to be self-supporting.”

There are other advantages to using sheet metal, including its relative inert reaction to temperature differences – drying in the paint shop, for example.

“We also have to consider end-of-life and recycling requirements. Some plastics are recyclable, but not normally back to prime source material. Aluminium will recycle back to prime,” he explains. Then there is a question of infrastructure. “We have factories that we did not want to throw away. We can use the same press shop with aluminium as with steel; we have developed different techniques for making aluminium. Our paint shop can cope with steel or aluminium – it’s just a question of reformulating the electrocoating.”

White dismisses some issues as being under the heading of ‘urban myths’, such as concerns about painting and joining. “It isn’t too hard to adapt,” said White. “You need special adhesives and seals that take account of aluminium’s character as a heat sink but, in the main, the paint shop is the same – we paint steel alongside aluminium, which doesn’t need as much electrocoat and base coat as steel as it has its own corrosion protection.”

How to make the best joint

“Realistically,” he says, “challenges [of joining and painting] tend to revolve around the surface condition of aluminium. If you have a thick oxide layer then it makes a weaker bond – it is only going to be as strong as what it is connected to.”

Pre-treatment, such as anodising or abrading, may be necessary in order to create a substantial bond, but Dr Savage maintains that ITW technology does not suffer from that problem. Aluminium oxide has what is described as a ‘reasonably open’ molecular structure, which allows adhesives to penetrate several microns into it; a clean and grease-free surface will facilitate a very good bond, depending on the application.

Joining aluminium to other materials presents particular challenges, as a composite’s surface layer is likely to be its weakest link. A lot of relevant work has been going on in the marine industry, and experiences there can be carried across to other sectors. However, while the auto sector often leads in R&D, the level of investment in change is so huge that it can take some time before results are seen on the road.

Aluminium is one such example, as are alternative power sources. Any company will take its time in getting to the level of deployment at JLR and Audi because of the cost of changing production lines.

“We are seeing more and more use of aluminium in structural applications,” Dr Savage continues. “At a conference on lightweight vehicles last year, a number of manufacturers said they were going down the aluminium route as far as possible. It is becoming the material of choice because of the challenges of, for example, carbon fibre. We seem to have gone as far as we can with steels and exotic materials are not reliable.” One problem with aluminium, however, is its commodity pricing; the price this week and next can be very different from each other.

Audi has been facing these challenges and dealing with them for nearly two decades. Its ASF (Audi Space Frame) concept premiered on the A8 in 1997; its current strategy is the MSF (Multimaterial space Frame), which combines aluminium, steel and fibre-reinforced plastics and is manifested in the A6, A7 Sportback and in elements of the A8, which has a frame comprising of extruded sections and pressure diecast parts of aluminium. The aluminium panels – such as the roof panels and the side panels – are joined by friction connections. While 8% of the weight of the body is extremely high-tensile steel in the area of the B-pillars, most of the rest is aluminium. This breaks down as 35% panels, 35% castings and 22% extruded sections. The wrought components and the 251 individual parts that make up its body are joined using a process that was intensively refined specifically for the A8.

The A6 also uses a composite steel-aluminium construction, which weighs in at approximately 15% less than a conventional all-steel makeup. It has strong stiffness, vibration and crash performance characteristics, in addition to its aerodynamics and aeroacoustics. Audi has used new construction methods and materials for the body, more than 20% of which is made of aluminium. The A4 has an aluminium crossmember behind the front bumper but is otherwise made of steel.

Audi says its MSF strategy enables its engineers to “design each body structure optimally for the requirements, whether the desired distribution of the axle loads, vehicle production volumes or body construction flexibility.” 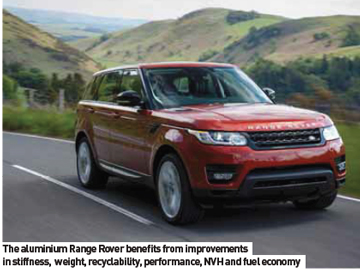 A question of cost

It is almost inevitable that the higher-volume models will have lower proportions of aluminium, for reasons that JLR’s Mark White makes clear. “The major challenge in making all-aluminium cars across the board is the cost of doing it,” said White. It is quite a lot more expensive than steel, which we can buy for somewhere around £600-£800 (US$900-$1,200) a tonne. Aluminium is something of the order of $1,150 per tonne. When we started our project at Jaguar, the cost of an all-aluminium body was twice that of steel. We have worked very hard to get it down to less than 50% higher but it is still more expensive. The volume segment cannot pass on that type of cost to its customers.”

There has been progress in a number of areas and from an original time of twice that of steel to make a car, an aluminium car now takes around the same length of time or even less. The recognition and development of a virtuous circle of lower weight, leading to opportunities for downsizing – engines, fuel tanks, brakes and so on – while maintaining or even improving performance has been enthusiastically embraced. Painting has been important – it is conducted at a lower temperature than is required for steel, which also means a lower energy requirement as well as shorter curing period – but joining has been absolutely key.

“We made the decision early on that spot welding (and similar techniques) was not appropriate for the aluminium car. Cold joining, with adhesives and riveting, was the way to go,” White explains. “Our view was that the challenge was to develop ways to put the adhesive on automatically. We also developed a self-piercing riveting technology for aluminium structures.” By happy coincidence, it turns out that self piercing rivets are also the ideal technology for joining steel to aluminium; welding the two materials together works great with steel but is very bad for the aluminium side; steel to- aluminium hot joining is normally done by means of a bimetallic strip, where it is done at all. “The only hot joining process we have used is a brazing methodology, which does not fuse the two materials together; it uses a filler wire.”

No cure for this condition

“Our joining technology does not need heat to cure it,” says ITW’s Matt Savage. “The key advantage is the lack of need for preparation. As long as the surfaces are degreased and clear of mould, oil or other pollutants, they can be bonded immediately.” The technology has been in existence for around 20 years but mostly been found in composites, and in the marine industry. “Over the last five to six years it has been extended to metal materials. For the very best results, a surface activator is needed, but that involves just wiping on a solution. We have spent a lot of time looking at how to make the processes simpler, cleaner and with fewer steps and processes – generally, making it easier to use.”

Audi uses a range of techniques, including self-tapping screws on models including the TT, which are used to join aluminium and carbon fibre-reinforced parts. An adhesive layer eliminates the risk of corrosion posed by the carbon reinforced materials while simultaneously sealing the joint.

Friction stud welding is used to join steel and aluminium. A steel element, a kind of rivet, penetrates an aluminium panel while rotating at high speed and under great pressure, creating a friction-welded joint with the steel sheet below. Meanwhile, the result of JLR’s decision to go the rivet-and adhesive route is manifested in the new Range Rover Sport’s 25% increase in stiffness over its steel-built predecessor. The advantages are significant but the cost hurdles are multiple: the expense of the raw material is one and the higher price of building it is another. JLR has now got to the point that its assembly lines can cope with steel and aluminium without breaking step, but large volume manufacturers are going to be very cautious before throwing out their expensive infrastructure, which includes welding and time-consuming paint shops oriented towards steel. The price of building new facilities is too high for the perceived benefit – for the time being.

However, advances continue to be made.

If the expense of changing joining technology is hindering a switch to aluminium for the larger volume manufacturers, interesting news emerged not long ago as David Mason, vice-president, global automotive, at Altair points out.

“General Motor’s R&D organisation announced what it claims is an industry-first in aluminium welding. If it is true, then it will start to change the scene for assembly in aluminium,” he says. 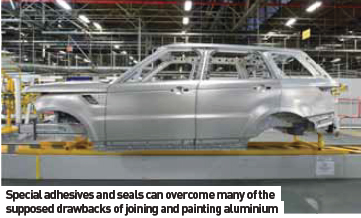 The technique GM announced, already in use, was described as a “new resistance spot welding process” and uses a patented multi-ring domed electrode that does what smooth electrodes are unreliable at doing – welding aluminium to aluminium. The electrode is claimed to disrupt the oxide on aluminium’s surface, enabling a stronger weld. GM expects the process to eliminate nearly two pounds of rivets from aluminium body parts such as hoods, liftgates and doors. It is currently in use on the bonnet/hood of the Cadillac CTS-V and the liftgate of the hybrid versions of the Chevrolet Tahoe and GMC Yukon.

GM plans to use this technology more extensively from 2013 on, asserting that the process is fast, inexpensive and reliable, with advantages of flexibility and weight-saving. It also says that recycling welded parts is easier.

If such techniques are practical and adopted more widely then it is very likely that aluminium will spread beyond its current restricted role in premium segments and limited high volume applications.