Porsche prepares to launch the Macan from Leipzig

As Porsche prepares to launch its new Macan model Nick Holt visits the Leipzig facility to find out more about the current production set up and plans for the future.

The founder of Porsche once said that he couldn’t find the car of his dreams, so he decided to build one. “That has been our motivation and philosophy here at Leipzig,” explains Dr Martin Kahmeyer, general manager for production at the Saxony plant. “We like to think we can provide solutions for pretty much anything [automotive].”

At the end of June this year the plant celebrated its 10th anniversary since the start of production and also reached its 500,000 vehicles-produced milestone. Now, with the announcement that the new Macan model will be produced there, the facility is building a major new site extension.

Modular assembly
“2011 was very important for us, with the [Porsche] board making the decision to produce the Macan here at Leipzig and giving the go-ahead for the site extension, which will not only include an assembly line, as with the other models [Cayenne and Panamera] but also paint and body shops,” says Dr Kahmeyer. 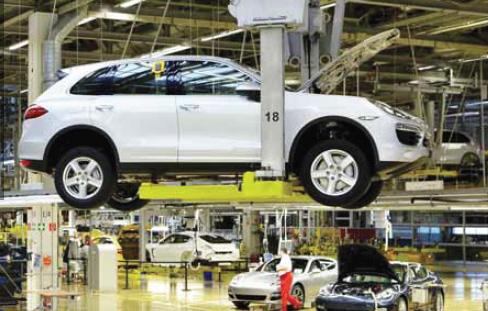 Leipzig currently produces the Cayenne model (since 2002) and the Panamera (since 2009) and is a modular assembly plant. The Cayenne body is produced at the VW plant in Bratislava and is delivered to Leipzig painted and partially assembled with glass, interior and electrical and hydraulic ancillaries. These are then fitted to the powertrain and final assembly and quality checks are completed. The Panamera body is built and painted in Hannover but all other assembly is completed at Leipzig, where it joins the mixed line with the Cayenne.

Working community
The company operates a very transparent bonus scheme related to productivity targets. All staff – whether on the production line or in administration roles – receive the bonus and this reflects the sense of a working community which has been cultivated at Leipzig; all sharing in the success of the plant. Similarly, the workforce is encouraged to look at ways to improve the efficiency of their section of the line, with teams contributing ideas as part of a culture of continuous improvement. Where new developments are planned, the production workers are included in the process.