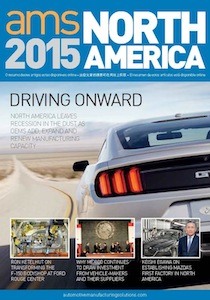 Much of the talk about the automotive industry today focuses on emerging markets such as India and China, but in fact one of its oldest heartlands – the US – is experiencing a new bout of manufacturing investment after finally pulling clear of the last vestiges of the 2008 recession. Sales of cars and light trucks currently stand at 17m per year, and analyst IHS predicts that production will rise from this level to 19m by 2022. Nor is it only US manufacturers which are building new facilities, renovating old ones and refreshing their production line-up; they are being joined by OEMs from Europe and Asia, some of which are establishing a production presence in North America for the very first time.

In fact, the biggest excitement is to be found in Mexico, where low-cost labour, government incentives and multiple free-trade deals with the international community are feeding an investment, and production, boom. OEMs with an existing presence are expanding their facilities, while new arrivals are helping to develop a number of automotive production hubs in the country.

All this and more is covered in our special North America edition, which is available to view for free here. The in-depth articles (also with summaries in Spanish, Portuguese and Chinese) are as follows: