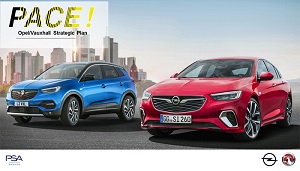 After losing around US$16 billion in Europe, GM decided to sell Opel/Vauxhall to PSA. The French company had been transformed from near bankruptcy to profitability under Carlos Tavares’ shrewd stewardship. Tavares was looking for ways to grow PSA; with joint vehicle programmes between GM and PSA already under way, he could see value in Opel/Vauxhall where most analysts could see only deep-seated problems.

For Tavares, Opel is an opportunity and a challenge. With GM a willing seller, following due diligence and EU approval, the deal was completed on August 1 this year. At this point, Opel management – under Tavares’ careful guidance – set about producing their future strategy, PACE!. The opening of the PACE presentation made it clear that change was coming and moreover that the “status quo is not an option”.

The new Opel strategy will focus on: Profitability, Agility, Collaboration and Enablement. In fact, the PACE acronym has two meanings, also standing for Performance, Accountability, Customer Focus and Empowerment. However, for Tavares P really stands for People: he wants to free Opel/Vauxhall employees to create a new company, underpinned by the profitable PSA’s resources. Scale also helps, and the enlarged group is now the no.2 vehicle company in Europe, behind Volkswagen, selling 4.3m vehicles worldwide, around ¾ of these in Europe; it has an automotive revenue of around €55 billion, a purchasing budget of close to €39 billion and employs over 200,000 people.

The new Opel aims to do things not achieved under GM’s stewardship. Targets include: positive operational free cashflow by 2020, and a recurring operating margin of 2% by 2020 and 6% by 2026. Central to this is reducing Opel’s breakeven point to 800,000 cars (Opel CEO Michael Lohscheller would not say what it currently was but given Opel’s losses and current volumes it would likely be more than 1m).

The PACE plan has 4 levers: electrification, improved competitiveness, a profitable sales offensive and leveraging the Opel/Vauxhall brands. The last three are natural levers which any major car company would normally look to exploit naturally, so how the brand electrifies its range in the years ahead is particularly significant. Lohscheller admitted that, under GM, Opel was not on track to meet the EU’s 95g/km CO2 target. The new plan means it will be, largely through adopting PSA technology: the new Grandland X comes with a plug-in hybrid option and the new (PSA-based) Corsa will also have a full electric option. Two other models will have electric options by 2020; and by 2024, all Opels will have electrified options, although no details were offered on the mix between full electric and hybrids.

In terms of improved competitiveness, PACE calls for €1.1 billion of synergies annually by 2020, rising to €1.7 billion by 2026: 30% of the savings will come from purchasing, 25% from combined R&D and 20% from shared manufacturing. Improved purchasing will reduce costs by €700 a vehicle by 2020 and a further €400 or more per vehicle will be saved by improved manufacturing arrangements and logistics. Opel plans for 100% utilisation by 2020, which will be aided by switching production from GM Korea to Europe.

Key to this is switching all Opel/Vauxhall models to PSA platforms, CMP for B segment cars and EMP2 for C/D and bigger vehicles; this switch will be complete by 2024 by when Opel/Vauxhall vehicles will be using one of four PSA powertrains for additional savings. At the same time, the Opel engineering centre in Russelsheim will take on new roles, not only engineering Opel/Vauxhalls using PSA platforms, but also becoming the group’s centre for US market federalisation, fuel cells and autonomous technology.

There will also be changes to what is made where; while the long-term future of the UK plants will be largely determined by the UK-EU Brexit agreement, elsewhere change is already underway. A new EMP2-based SUV will be made at Eisenach in Germany, rather than the Mokka (currently made in Spain), and a new D-segment car will be made on EMP2 at Russelsheim. Whether this means a quick replacement for the new Insignia remains to be seen; this could be a coupe-style vehicle like the Volkswagen Arteon. The new SUV at Eisenach is also significant because the new plan calls for SUVs to represent 40% of Opel/Vauxhall’s sales by 2021, i.e. around 400,000 vehicles; to achieve this it’s likely that at least two more models on top of the current range would be required.

The highly detailed plan unveiled at the beginning of November is nothing if not ambitious; but given Opel’s decline in European share from 9.2% to less than 6% between 1999 and 2016, and the multi-billion losses over this period, nothing less will do. It is clear that Tavares and his colleagues believe that they have found the way to operate profitably in the mass car market today; successfully translating this to Opel/Vauxhall will be proof positive of this belief.