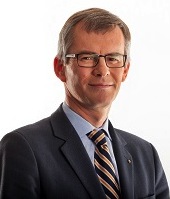 Olive, who is currently senior vice-president, Manufacturing and Logistics Europe at Renault, replaces Shohei Kimura, who moves to a new leadership position in manufacturing within the Nissan group. Kimura has been head of the converged Alliance Manufacturing Engineering and Supply Chain Management since its creation in April 2014. His new role will be announced at a later date.

Olive will be in charge of futher accelerating integration within this remit. Alliance Manufacturing Engineering and Supply Chain Management function sits along three other merged functions: Purchasing, Engineering and Human Resources.

Jose-Vincente de los Mozos will add Olive's current responsibilties to his own duties as executive vice-president for Manufacturing and Supply Chain at Renault.

Joining Renault in 1982, Olive held various manufacturing positions at the Sandouville, Fonderie de Bretagne and Douai plants in France. He was promoted to the position of plant manager at Douai in 2004. He was transferred to Renault's subsidiary, Dacia, in 2010 as managing director, simultaneously occupying the same position for the Renault Group in Romania. In 2013, he was appointed industrial director for Renault's Euromed-Africa region in addition to his Dacia role. The following year, he became senior vice-president, Manufacturing and Logistics Europe, with responsibility for 16 production sites.