The production of carbon fibre chassis is an expensive business – just ask BMW. The German vehicle-maker and its partners have between them spent upwards of €700m ($870m) on the mass-production of its i3 and i8 models which feature large amounts of carbon fibre-reinforced plastic (CFRP). Moreover, these costs do not decrease much for low- and medium-volume manufacturers looking to take advantage of the material’s high stiffness and light weight. In 2010, for example, McLaren awarded a contract valued at €150m to Austrian composites specialist CarboTech to produce approximately 25,000 CFRP tubs for its supercars.

On the basis of these examples, one would think that the use of CFRP for the production of structural automotive components is restricted to big players and high-end sportscar manufacturers. Enter Far-UK. This small company in Nottingham, which employs around 25 people, has developed technologies that it claims can make CFRP chassis accessible and affordable for niche carmakers with production volumes of only several thousand units a year. Far-UK has launched a range of fully crash-test compliant CFRP chassis, called Far Platform Chassis (FPC), which can be customised by carmakers to their individual needs in a variety of ways.

According to its manufacturer, the light and strong FPC is simple to assemble and can be incorporated into a variety of production lines with ease. By opting for a modular spaceframe rather than a monocoque or tub design, Far-UK can fabricate each FPC quickly using minimal tooling and inexpensive moulding methods. Furthermore, the FPC can host a variety of different body panels to produce citycars, sportscars and vans, as well as accommodating a variety of powerplants.

The director of Far-UK, Lyndon Sanders, says: “This super-light structure has the potential to deliver record levels of fuel efficiency while meeting stringent crash safety regulations. This is a fantastic time to be in the automotive industry. We are on the cusp of a wave.”

Far-UK was set up in 2012 at the University of Nottingham Innovation Park and now operates out of a 460 sq.m facility on the Wilford industrial estate in Nottingham. The university has a strong reputation for the quality of its composites research. Sanders comments: “We have a certain loyalty; some of our leading thinkers are from Nottingham’s Composites School. It is not an exclusive relationship, however; we are working with WMG [Warwick Manufacturing Group] at the University of Warwick and the NCC [National Composites Centre] at the University of Bristol.”

One of Far-UK’s main aims is to make it easier for manufacturers such as carmakers and their tier one suppliers to design and fabricate composite parts. The company works with its customers to develop composite-based solutions to problems that have proven difficult to solve using other materials. Central to Far-UK’s ability to solve these problems is its portfolio of carbon-fibre braiding technologies.

Braiding is a method for manufacturing textiles that dates back to the early 1800s and is used to produce ropes, shoelaces and the reinforcing structures in garden hoses. In a conventional braiding process, a mandrel is fed through the centre of a braiding machine at a uniform rate as fibre yarns from moving carriers on the machine are deposited onto the tool at a controlled rate. The carriers work in pairs to produce an over/under braiding sequence.

As part of its work with the UK’s Composites Innovation Cluster (CIC), Far-UK is developing a process involving braiding – codenamed Process 4 – that enables small- and medium-sized enterprises (SMEs) to produce complicated shapes using CFRP at an affordable price by eliminating the need for tooling. As a demonstration of its potential, the process has been used to produce a composite wheelchair, which the company exhibited last year in Paris at JEC Europe, a flagship event for the composites industry.

Building the case for Axontex
In August 2013, Far-UK acquired Axon Automotive of Wellingborough, UK. Axon was established in 2006 to commercialise a braiding process called Axontex. Far-UK’s technical and commercial directors, Kevin Lindsey and Chris Taylor, had been working at Axon before they set up the company with Sanders. Lindsey and Taylor had initiated many of the programmes that were underway at Axon, so the pair felt that their new company should assist their former employer and its customers in seeing these projects through to their conclusion.

Sanders explains: “We got to the point where the previous owner of Axon, who had dragged the business up by its bootstraps from nothing, was ready to retire. With us running most of its major programmes, we made an offer and took over the company. It was an entirely amicable arrangement. From our point of view, one of the key drivers for the acquisition was Axontex. We think that Axontex is ready to go global.”

Initially developed at Cranfield University in 1996, Axontex enables the production of loops and hoops of carbon fibre that can be combined to manufacture CFRP beam structures in a cost-effective manner. Unlike Process 4, this type of braiding does require tooling.

In April 2012, Axon Automotive was presented with an Innovation Award at JEC for the development of a spaceframe chassis for a B-size city car – similar in size to a Citroen C1 and called the Axon 60 – that weighed 50kg, produced using Axontex. The lightweight structural beams that were employed to fabricate the spaceframe of the Axon 60 were three-dimensionally woven structures, comprising carbon-fibre braid over multiple machine-laid preforms made of closed-cell, low-density polyethylene (LDPE) foam.

The carbon fibres and LDPE were then infused using a vacuum-assisted resin-transfer moulding (VARTM) process with a thermosetting urethane acrylate-based resin (Crestapol 1250 LV from Scott Bader of Wellingborough). During this moulding process, the LPDE foam expands and conforms to the shape of the tool.

The moulded Axontex carbon fibre composite beams have a unique internal structure featuring shear webs which, combined with the mechanical properties of the resin, provide high stiffness and strength. Test pieces manufactured using the system have exhibited an ultimate tensile strength (UTS) of 900–1000MPa and a heat deflection temperature (HDT) of over 130°C . The chassis passed the seatbelt load test according to ECE regulation 14, resisting up to 1350 daN +/- 20 daN per attachment.

Counting the cost benefits
The use of braided spaceframes presents many advantages over conventional methods for the production of CFRP chassis. The time-consuming hand lay-up methods used by the likes of Ferrari require expensive materials – with much wastage – plus highly skilled laminators and costly autoclaves. The resin transfer moulding (RTM) employed by BMW and McLaren require sizable investments in tooling and machinery. By contrast, Axontex generates little waste, uses a commodity material in braid, and the tooling is cheap. Furthermore, the vacuum infusion machines employed in the process are relatively inexpensive. 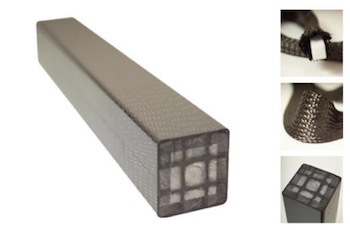 Far-UK believes that Axontex spaceframes would be cost-competitive with aluminium frames demonstrating the same mechanical properties when produced in plants with outputs of approximately 20,000–35,0000 units a year. Conventional car plants using pressed steel produce significantly more units than this – somewhere between 100,000 and 150,000 units a year – but they employ tooling that can cost in the region of €400m a set. A set of tooling for the production of Axontex frames, on the other hand, costs less than €40m.

“We are taking orders of magnitude out of the tooling cost. We do not need to produce those huge volumes for our Axontex plants to become cost-effective,” Sanders explains. “So the whole distributive manufacturing argument starts to kick in. If you wanted to make 100,000 units [using Axontex], you could have one plant in China making 35,000 units, one in Mexico making 35,000 units and one in the UK making 30,000 units; you can cover the globe.”

Far-UK has used the lessons that it learned through the acquisition of Axontex and the production of the Axon 60 in the development of the FPC. Each variant of the FPC is designed around a single set of tooling that Far-UK owns. The company will supply the chassis in the form of beams that its customers can glue together themselves, or as a fully bonded chassis. The FPC can also be supplied as a rolling chassis with a windscreen and suspension system. Sanders continues: “If the customer wanted to do volume production, in the region of 5000-10,000 units a year, we would say that it would be worth them having their own bespoke tooling, rather than trying to accommodate their needs with a standard chassis.”

So what sort of company would be interested in the FPC? In the UK, there are a number of small sportscar manufacturers – many of which started out selling kit-cars – that make approximately 2,000-3,000 units a year. These companies survive on the appearance and performance of their vehicles, and could well be interested in the potential benefits provided by FPC. Outside the UK, there are many small-scale manufacturers producing vehicles that are more utilitarian in nature, such as hybrid citycars and delivery vehicles.

“We are also having conversations with a number of more entrepreneurial companies that are new entrants to this market, particularly in the production of electric vehicles; companies that are not in that space at the moment, but believe that electric vehicles are the way forward,” reveals Sanders. “These companies could be put off by the amount of engineering needed to enter that marketplace, so someone who could offer that engineering in a rolling chassis format is a potential friend. These conversations are happening both inside and outside Europe.”

A second life?
European Union end-of-life directives stipulate that 80% of the materials used in a new car have to be recyclable. So what are the options for the FPC? There is a relatively straightforward way of recycling CFRP: it can be ground up and used as a filler in concrete. More sophisticated methods than this, such as pyrolysis (in which the resin matrix is essentially burnt off, yielding carbon fibres) are also maturing.

However, Far-UK has a more interesting solution to this problem. It believes that its FPC is durable enough to outlive the rest of the car. As such, a carmaker could produce a vehicle that at the end of its ‘first life’ is returned and up-cycled. For example, the exterior skin panels – which might be made from glass fibre-reinforced plastic (GFRP) – contribute to the appearance of the vehicle but not to its structural properties. These elements could be stripped off and replaced to refresh the appearance of the car. Furthermore, FPC design can accommodate a variety of different powerplants, so these could also be altered.

Sanders explains: “The FPC might exit the factory with a hybrid gasoline powerplant on it, it might do 100,000 miles in ten years and then it might come back. The manufacturer might strip all of the exterior panels off, take the powertrain out of it, put a hydrogen fuel cell in it, re-skin it and put it back out onto the road again. The frame will be fine. This is an argument that has yet to be tested with the EU in terms of their end-of-life directives, but we would argue that re-use is better than recycling.”

Far-UK is now targeting the other end of the automotive market. It is working with Tata Motors European Technical Centre (TMETC) on a £3m project to develop a process for the high-volume manufacture of cheap, lightweight structural components. According to the company’s technical programme manager, Sophie Cozien-Cazuc, the HiLiTe project will offer technical solutions that will enable carmakers to seriously consider fibre-reinforced plastic materials for their future platforms.