Cars are made of four basic materials: metal, rubber, plastic and glass. While the first three of these undergo exhaustive analysis in order to improve the respective material in order to build a better product, glass can be considered the poor relation at the party. In fact, the acknowledged wisdom is that glass is an unchanging commodity, the basic composition, production, and usage of which has remained unchanged for as long as anyone can remember – and will do so for the foreseeable future.

To get the OEM perspective on glass, AMS asked various experts from Mercedes-Benz about what the recent changes they have seen with regards to glass, and how the automotive glass house affects the overall development and construction of a given car. The general consensus from Daimler’s team of experts was that they had not appreciated any significant changes with regards to glass as a raw material, or in the product’s clarity or toughness. This, they said, was largely due to the fact that laminated glass (primarily used for windshields), is subjected to legal regulations in terms of crash performance. Rather than function following form, this could be interpreted as function following the law.

That said, there can be a considerable variety of glass types used across a single Mercedes model. For example, together with the laminated windshield, sunroofs and side glass can use either be laminated or tempered product. Some Mercedes models use glass that has specific acoustic properties, designed to reduce interior cabin noise, while tinted privacy glass and even infrared reflective glass can be added as an option.

The latest connotation of this is Daimler’s panoramic vario-roof with ‘Magic Sky Control’. A grand step beyond conventional thermal insulation or sunblinds, this feature uses plate condenser physics, where particles within the glass structure position themselves relative to an applied electric current. When an electric current is applied to the glass, the particles are aligned which allows light to pass through. Turn off the current and the then randomly arranged particles block out light. Even in transparent mode, the glass blocks UV and infrared light, while the darkened glass (which activates when the engine is switched off) can help to reduce interior cabin temperatures by up to 10oC. 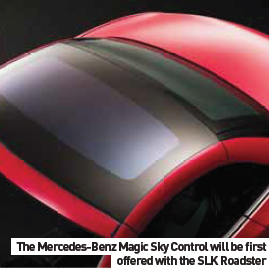 While chassis stiffness is improved from generation to generation through the use of improved materials - such as the increased usage of ultra-high strength steels – and the introduction of advanced joining methods, glass also has its part to play in improving overall rigidity. According to Mercedes-Benz, the anticipated stiffness that fixed glass parts add to the chassis, the windshield and the backlight, is factored into overall chassis performance from the earliest stages of vehicle design.

This rigidity helps improve such characteristics as vehicle handling, yet there is a balance to be achieved between improved chassis rigidity and the unavoidable truth that glass is comparatively heavy. According to Mercedes, each of the company’s model ranges have lightweight construction targets as part of the company’s ‘sustainable mobility’ initiative, where all build elements are examined for potential weight savings – even glass. But rather than demanding changes in the glass components, other areas of a vehicle are generally altered in order to compensate for the added weight, particularly as the product is integral to maintaining the company’s ‘premium standard’. 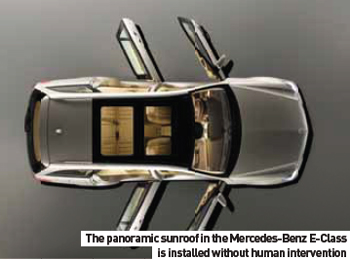 Essentially, this translates to glass, both in configuration and thickness, being a fundamental element contributing to improved cabin acoustics and overall passenger comfort, an example of which is the use of sound-dampening double-glazing in various car and bus models. But whatever the physical configuration of the glass product, Mercedes requires that it performs to a superior standard, reducing wind and road noise in order to deliver a quieter, temperature-controlled cabin space.

Before passengers can appreciate the interior refinement to which glass is key contributor, the various elements must be delivered lineside and installed. In the case of the panoramic sunroof for the E-Class saloon and wagon, produced at the Mercedes-Benz facility at Sindelfingen, Germany, the individual sunroof elements are fed to the production line in sequence in specially-designed carriers; these are produced by an external supplier. Prior to installation, robots match the sunroof to the vehicle before positioning the unit in preparation for final installation.

In order to complete the automated insertion process, the vehicle stops at a predefined position within the cell, while a laser-based system aligns the sunroof with the car. As the unit is applied, mechanical positioning aids guide the unit into its final position. The cell employs various Kuka robots, which also apply the adhesive used to fix the sunroof. The carmaker uses a polyurethane-based product to fix glass components, developed by two companies, Dow and Sika.

As for where Mercedes-Benz purchases the glass used in its various vehicles, the company says that it is in contact with all glass manufacturing companies, with order placed based on the four key ‘value drivers’: quality, technology, logistics and cost.

When it comes to the development and production of automotive glass, Guardian is one of the biggest players in the market. In business since 1932, the US-headquartered glass producer first delivered windshields for the trucks in the US military. Eighty years later, the company produces a full range of automotive glass at plants located around the world.

Guardian also produces a series of glass-enhancing products. The company claims that standard windshield glazing allows up to 65% of all solar energy to be transmitted through to the interior of a vehicle. To reduce this, the company has inreoducd its SilverGuard infrared reduction product. Made up of a series of film laminates, the thickness of which are measured in nano particles, energy transmission is reduced by 20%, which can translate to improved fuel economy and interior cabin comfort.

The continuing rebound of the automotive sector is having an appreciable effect on glass markets. According to a report issued by the US-based Freedonia Group, demand for flat glass in the United States is projected to increase 9.1% per year from the low of 2009 through to 2014, at which the point all production will total 745 million sq. ft., worth an estimated $7 billion. 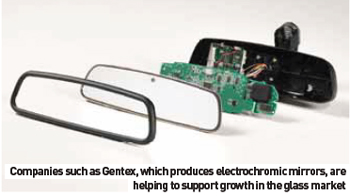 The report further states that ‘safety and security glass’ accounted for nearly 60% of total demand value in 2009, including laminated windshields and tempered window glass products. In terms of ‘smart’ glass, an increasing percentage of all production is being delivered to companies such as Gentex, based in Michigan, a tier supplier of electrochromic mirror assemblies delivered to OEMs across various global regions. While overall consumption of flat glass by end users such as this will remain a relatively minor portion of the overall market, Freedonia again says that virtually all demand in this area, for such products as heads-up displays and self-cleaning glass, will be driven by automotive usage.

Although it may be a simple case of out of sight, out of mind, glass is an integral component to automotive production that offers both direct and associated benefits to carmakers and customers. Whether glass is helping to stiffen a chassis, or reduce the effects of insolation, it remains a multi-faceted product that is widely underrated by those intrinsically associated with its myriad applications.