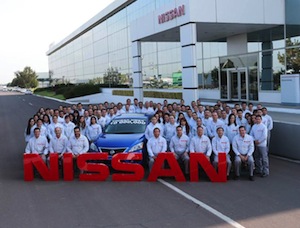 Mexico – The milestone comes almost five decades after the Japanese OEM started producing vehicles in the country and represents the efforts of three manufacturing facilities with a combined annual capacity of 800,000 units. The 10 millionth unit was a Nissan Sentra SR built at Aguascalientes A1 Plant for sale in the local market.

Nissan started assembling vehicles in Mexico in 1996 with the Datsun Bluebird at CIVAC Plant, Morelos – the company’s first factory outside Japan. In 1982, Nissan opened its powertrain plant at Aguascalientes, which was joined ten years later by the vehicle manufacturing complex, Aguascalientes A1. The first production model from this plant was a Nissan Tsubame, exported to Japan. It was soon followed by the Nissan Tsuru for both domestic and export markets.

In 2013, Nissan launched Aguascalientes A2 plant, which is now regarded as a benchmark within the company; it achieved maximum capacity after only 19 weeks of operation and turns out 613 vehicles each day.