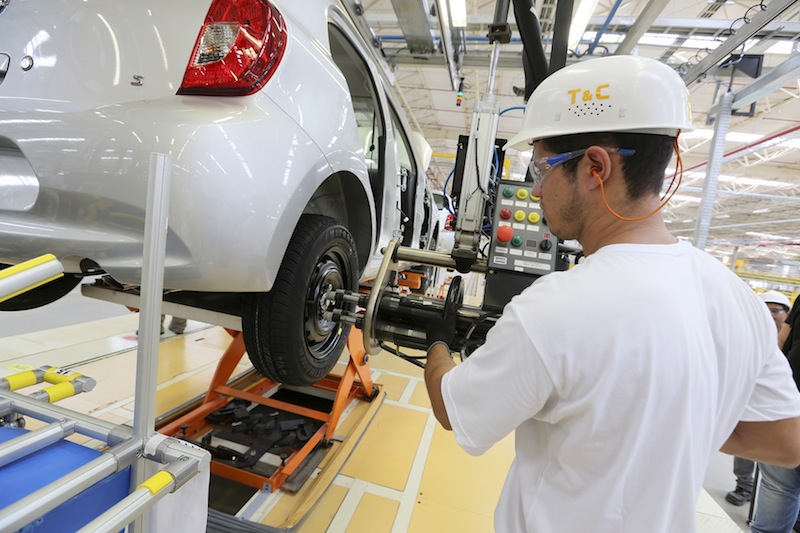 In April this year, Nissan launched a serious assault on the giant Brazilian vehicle market by opening its first standalone factory. The new 220,000 sq.m plant on a 300-hectare greenfield site at Resende, Rio de Janeiro State, is a bold statement by the Japanese manufacturer that it believes it can achieve similar sell-where-you-build success there as it has managed in countries like Mexico, the UK and the US. According to Nissan, the facility will produce 200,000 cars and a similar number of engines per year.

It is a bold move, because right now the Nissan brand is small in Brazil compared not only with other global OEMs but alliance partner Renault, which has been building in the country since 1998. According to figures from Brazil’s association of automobile manufacturers, Anfavea, last year Nissan sold 77,825 vehicles, including 62,220 cars – a decrease on the 2012 output of almost 105,000 units. This gives Nissan slightly over a 2% share of the car market. However, the company wants to improve this figure to “at least 5%” according to an announcement made in 2011 when the plans for Resende were unveiled. For this to happen, though, sales of cars alone would have to reach 140,000, thus rivalling Nissan’s compatriots, Toyota and Hyundai.

While Resende represents Nissan’s first big push into Brazil, the OEM is not entirely new to production in the country, having made the Frontier pick-up locally since 2001. The company subsequently added the Livinia people-carrier range at the Renault-Nissan joint plant at Curitiba in Paraná State. However, these contribute little to Nissan’s sales total; according to Anfavea, last year Nissan produced 26,809 vehicles, of which 16,173 were pick-ups. Back in 2011, Nissan said it actually had capacity for 59,000 vehicles at Curitiba.

This means the bulk of Nissan’s sales are imports, and one line in the company report for 2013, published earlier this year, illustrates to the importance of reducing this reliance. Defending a fall in profits for the year, Nissan said this was partly attributable to “higher importation costs in Brazil due to changes in the Brazil-Mexico Free Trade Agreement”.

This message was repeated again in a speech to shareholders in June by Hiroto Saikawa, Nissan chief competitive officer, who said: “Due to changes in Free Trade Agreements, our ability to import vehicles from Nissan Mexico was dramatically reduced. Sales in Latin America ultimately fell 16.1% to 186,000 units [in 2013].”

Brazil itself is keen to encourage more manufacturers to build locally, and does so via the Inovar Auto initiative which makes it more tax-efficient to build than import. Nissan makes the successful Sentra compact saloon in Mexico and although it did not name the models it was taking a hit on, this is likely to be the main one.

Set for supersizing
In the beginning, though, Nissan will concentrate on making smaller models at Resende, and has begun production of the March subcompact (Micra in Europe); it will also add the related Versa subcompact saloon. However, history has shown that once Nissan opens one of its ‘superplants’, whether in Aguascalientes in Mexico, Smyrna in Tennessee or Sunderland in the UK, other model sizes quickly follow.

The assembly plant at Resende covers the entire production process from stamped metal onwards and includes a modern three-wet system in the paintshop which shortens the process by applying base coats and lacquer soon after the primer, reducing material and energy consumption.

Nissan emphasises that the plant has been designed and built to protect the well-being of its workers, incorporating 88 robots to carry out tasks which “demand more precision or could incur safety or ergonomic risks”. For example, automatic guided vehicles (AGVs) are used to move small trolleys of parts that otherwise might have been carried by chain-driven belts, thus making operations safer and quieter.

Nissan also boasts that the plant is environmentally friendly, citing its use of natural lighting and ventilation, as well as water recycling. Beyond the buildings themselves, Nissan has additionally created a 12-acre ring of fields that “reflect the region’s natural habitat”.

The number of employees totalled 1,500 when Resende opened in April, a figure that Nissan expects to rise to 2,000. The engine facility currently employs 200. Nissan says it has spent $4m on technical training, with over 300 workers sent overseas for three months to work alongside local employees at Nissan’s plants in Mexico, the US, and the UK. The vehicle quality control team trained for six months in Japan and Mexico.

Next to the plant, a supplier park has been established for ease of parts delivery, with four companies already working to feed the plant alongside two that operate inside it. Nissan has named the six as: seat producer Tachi-S, suspension manufacturer Yorozu, rubber-seal expert Kinugawa, cockpit component supplier Calsonic Kansei, plate-maker Mitsui Steel, and brake and fuel pipe specialist Sanoh. 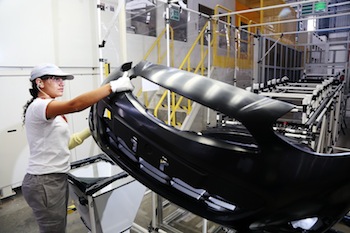 In its 2011 announcement, Nissan said it chose Resende because of its proximity to the “high-quality ports of Itaguai and Rio de Janeiro” as well as good access to skilled labour and suppliers. Indeed, the VW-owned truckmaker MAN also has a production site here.

Local suppliers are important for Nissan to reach the 65% local content which automakers need to qualify for tax breaks, and at the time of the announcement Renault-Nissan CEO Carlos Ghosn said that figure was attainable. Now Nissan reckons it will get to 80% local content by 2016.

The chances of this happening were much improved after the announcement that it would build an engine plant alongside the assembly facility. This new facility that Ghosn said would “increase our competitiveness” is due to open officially later this year, making a 1.6-litre gasoline-ethanol unit of the flexfuel type that powers the majority of new cars in Brazil. It will bring Nissan’s total investment at Resende to $1.5 billion.

BRIC building
Nissan’s strategy to boost sales in Brazil is part of a wider move to become a much bigger player in the so-called BRIC markets of Brazil, Russia, India and China. By the end of the 2010 fiscal year, Nissan had sold 1.2m vehicles in those markets from almost a standing start of fewer than 50,000 in 2001. Interestingly, just as Renault has avoided using its low-cost Dacia brand in Brazil, preferring instead to sell these models as Renaults, Nissan has so far made no moves to introduce its own low-cost Datsun brand to the country as it has in Russia, Indonesia and South Africa. Nissan is still importing the relatively premium Altima large saloon, which, based on the current line-up will remain one of only two models imported into Brazil (the other being the Sentra). 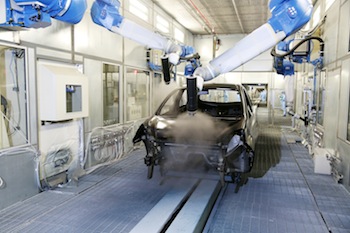 The importance that Nissan places on Brazil became clear in August, when the company officially opened its new design studio in Rio de Janeiro. Reflecting local tastes in vehicle design has become a key part of acceptance in a market for any OEM and is often tied to local production, which creates the feeling that the maker is properly integrated into the country.

Ford is a good example of this, with designs originating from its studio in Camaςari, Bahia State, now including the new Ka minicar and EcoSport small SUV, both of which have gone global. The EcoSport is already on sale in Europe and India; the Ka will follow next year.

Speaking at the opening of the Resende complex, president of Nissan Design America, Taro Ueda, hinted that something similar might happen for the Japanese OEM. “Brazil… can offer new inspiration for the design of our products for Brazil as well as globally. Soon, you may see some results of the work done by this team in collaboration with other design centres around the world,” he said.

In numerous ways, Nissan is showing that it is thoroughly committed to boosting sales in Brazil. The company had 117 dealers in 2011 but has plans to increase that figure to “more than 239” in 2016, which is closing on the 275 dealers of alliance partner Renault. However, the OEM faces an uphill battle to increase sales in a country that associates the brand specifically with pick-ups, particularly as sales of the Mexican-built Sentra are likely to remain constrained until Nissan decides to add it to the roster of cars at Resende. But the combination of local production, native design and a typically slick approach to marketing will make it hard to bet against Nissan succeeding in Brazil like it has in so many other countries.