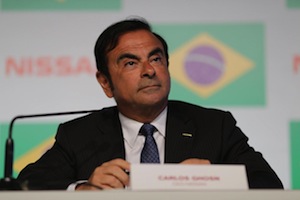 Brazil – Named Kicks like the concept car presented at the 2014 São Paulo Motor Show, the new model will be manufactured for global markets, starting with Latin America from 2016. Production will require an extra 600 workers and a second shift at the plant in Rio de Janeiro state.

“Nissan invented the first crossover in 2003, with the Murano,” claimed Carlos Ghosn, president and CEO of Nissan Motor. “Since then, we've established our global crossover leadership with vehicles like Juke, Qashqai and X-Trail – which have been great successes. The Kicks will bring Nissan’s unique crossover expertise to more regions.” Francois Dossa, Nissan’s president of Brazil, added that the workforce at Resende is “preparing to build it with top-notch Japanese precision”. The facility, which opened in 2014 to make the March and Versa compact cars, has received a 750 reais ($192m) investment for the new crossover.

Under the overall leadership of Nissan’s Global Design Center in Japan, the Kicks concept was conceived by Nissan Design America (NDA) in San Diego, California, and Nissan Design America – Rio (NDA-R); the two teams are currently working on the design and development of the production model. Kicks evolved from the Extrem concept which debuted at the São Paulo show in 2012.

Nissan confirmed that it is now studying the business case for launching Kicks in other regions, “underlining the brand’s commitment to global crossover leadership”.